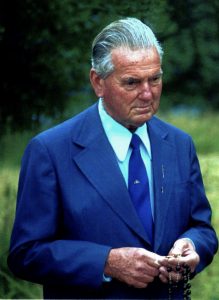 In 1927 he married Tereza Turcato and had two children with her. After her early death he married

again in 1932. He had another five children with Vitoria Filipetto.

He was husband and father, farmer, merchant.

His beatification process was opened in Santa Maria on

Always religiously and socially open-minded and apostolically active, João Pozzobon was invited by his pastor, the Pallottine Father Celestino Trevisan, from 1945 on to retreats and days of recollection in Santa Maria. Don Pozzobon himself testifies very clearly: “I did not know Schoenstatt, did not even know that there was this movement when those lectures and retreat courses began … A vital point for me was really to understand the mission of the founder. I understood him not only with my head, but also with my heart. “

He was fascinated by the first life-testimony in Schoenstatt: “Those who also impressed me were the followers, Joseph Engling and his companions: their heroism, their great love for their Mother and Queen, up to the dedication of their own lives. … That remained written in my heart since that sermon on the founding generation. … I tried to imitate their way. “

He found his very personal vocation in 1950, when he was asked to accompany the travels of a Schoenstatt Marian image. He was so impressed by the apparent work of the Blessed Mother among the families that João Pozzobon decided to continue this project. He asked for it and received the expressed blessing of Schoenstatt’s founder.

In 1952, after careful consideration of his circumstances and his obligations as a father, he realized that “this was a mission entrusted to me,” and in a dedication, he made himself fully available in the shrine of Our Lady: “I only made myself available as a small tool. She should lead me wherever she wished. I would go to where she sends me. “

She sent him. For more than 140,000 km he went for and with her for thirty-five years: to families, to hospitals, schools, prisons. He understood his consecration as a deacon as a way to bring people also sacramentally in touch with Christ and his mother.

His initiative led to the campaign of the Pilgrim Mother, which only expanded explosively internationally after his death. Today more than 200,000 images of the Pilgrim Mother of God from Schoenstatt travel in 92 countries all over the world. Month after month, millions of people take the Blessed Mother to their homes and thus come into contact with the place of grace and the blessing of the shrine.

João Luiz Pozzobon met the founder of Schoenstatt for the first time in 1947/1948 for the laying of the cornerstone and the dedication of the shrine in Santa Maria, Brazil. Because of what he had heard about the founder and his work, he had grown convinced that, “I consider him a sacred tool sent by Mary, and all he asks is a wish of Mary for me.” He held for all his life: “I had a very personal meeting with Father Kentenich, a day that will forever remain in my memory.”

João Pozzobon understood himself as a “little student” of the founder; he wanted to learn from him like the youth in the founding period. In all initiatives in the development of his apostolate, he asked for the intention and agreement with the spirit of the founder; if he could not be sure, he stopped.

For João Luiz Pozzobon the decisive factor was and remained the blessing of the founder, which he received for the first time in 1951 and which he repeatedly requested: “The rosary with the families continues, you can see many fruits. Father, I ask you to graciously grant me your priestly blessing so that I can endure faithfully until the end of my life. For my companions, I ask for the same blessing, so that together we can fulfill the wishes of Mary … I ask again for your blessing in order to better understand this great task. A true son of the Schoenstatt Movement. Nos cum prole pia “(1953). 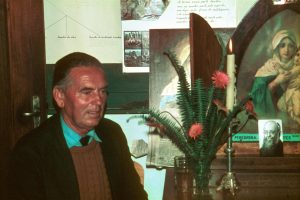 In one of the first encounters between P. J. Kentenich and João Pozzobon, a sister was present as an interpreter. Don Pozzobon said indirectly, “I know a person who puts on their best clothes when he goes to the Rosary. For it gives him great pleasure to pray this.” PJ Kentenich turned to his sister and said:  “Do not translate this to him – but he will become a saint once.” And he added:”With the prayer of the Rosary a man converted a whole city. “

In this conviction and in the grace-filled attachment to Fr. J. Kentenich, Don Pozzobon was not deterred by the grave difficulties which in the exile years of the founder also wanted to impede Schoenstatt in Santa Maria and thus his own work. On the contrary, he wrote to Father: “I try, at least mentally, always to be with you because your burden is heavy. … Father, if it pleases the Heavenly Father, I offer my life for the building up of the work of the Mother Thrice Admirable and Queen of Schoenstatt. I will help you, like Simon of Cyrene, to bear the burden that has been entrusted to you. ”

Every year he informed Father J. Kentenich about his activities, about his successes and failures in the apostolate, but also about his struggles and his personal commitment, his inner growth with the help of the Spiritual Daily Order and his spiritual diary.

In the mission to the Blessed Mother, Fr. J. Kentenich and João Pozzobon became allies. Father J. Kentenich appreciated the work of João Pozzobon and took an active part in the development of the campaign. Again and again he let himself be told about the progress and tried to arouse understanding for this new possibility for pastoral work.

When in 1968, after the Council, in a circle of priests, the discussion once again came to the fruitfulness of the Pilgrim Mother’s campaign, PJ Kentenich remarked to his brother-priests: “Remember how the words of Vincent Pallotti are fulfilled in the work of M. Pozzobon:  ‘You are the great missionary, she will work wonders? ‘, and added the remark:” Our priests – the young generation – are looking for a new and modern pastoral method! – Here it is!”