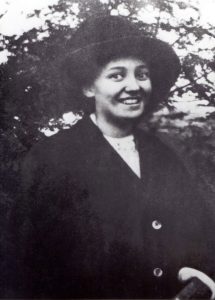 Gertraud came from a French-German noble family; she enjoyed a higher education in Austria, Belgium and England.

In 1917 she came into contact with Schoenstatt for the first time; she became the first woman to belong to the Apostolic Movement and was co-founder of the Schoenstatt Women’s Federation.

As a child, Gertraud wanted to become a missionary sister. She volunteered for the Red Cross at the outbreak of the First World War. In Mons, Belgium, she came in contact with a Schoenstatt Sodalist, Frater Salzhuber, whose apostolic commitment to the religious renewal of the world corresponded to her inner concerns. She looked for more intensive contact and this orientation was the setting for the future. She returned to Augsburg at the end of the war at the age of twenty seven. As in the military hospital, she continued to actively work as a lay apostle in the spirit of Schoenstatt in her parish. Schoenstatt became decisive for her life – and her life for Schoenstatt.

The Marian Consecration to the Thrice Admirable Mother of Schoenstatt on December 8, 1920, together with her cousin Marie Christmann, became the door-opener for the entire women’s movement. Gertraud wanted to devote all her strength for this Work; Ceaselessly she campaigned for the establishment and expansion of women’s groups in Bavaria. Soon, however, she had to struggle painfully into the will of God, who demanded from her more and more sickness, suffering, renunciation, and sacrifice. Thus Gertraud grew into her aristocratic ideal: Serviam. She wanted to serve, to be the foundation and seed, “so that the women’s movement could solve its task, so that Schoenstatt’s sanctuary would become a place of grace and Schoenstatt would have a profound influence on today’s time and world” (J. Kentenich, 1930). For this she offered her life and also renounced being available for the foundation of the new community of Schoenstatt Sisters of Mary.

Gertraud had the first contact with Schoenstatt through Corporal Franz Xavier Salzhuber, who developed a rich Schoenstatt apostolate in the hospital. He gave her an MTA picture, and through the magazine MTA she found her way deeply into the world of Schoenstatt. In 1917 she wrote a long letter to Father Kentenich. However, because of his age, he did not want to take on the requested spiritual leadership and asked Father Kolb to do it.

After the war, she asked the founder to allow women to participate in the Apostolic Federation of Schoenstatt. In this petition, Father J. Kentenich recognized the pointer of Divine Providence: “In 1917 a woman had already been interested, Countess Gertraud of Bullion. She became acquainted with Frater Salzhuber and asked me at that time, if I would like to take care of her. However, I had the principle of not giving in on women’s spirituality until I was thirty-five years old. That’s why I referred her to someone else … So, did man stand at the beginning? Oh no! It was always a seeking and searching for the plans of God. Schoenstatt is truly a work of God, in accordance with the plans of God “(J. Kentenich 1950). 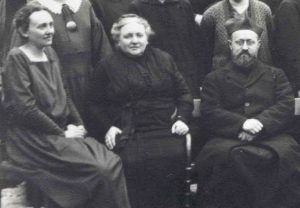 Gertraud maintained contact with Fr. J. Kentenich as the founder of a divine work for which she made herself fully available. At an early stage, she recognized the Leader of the Federation as “the Father of the Apostolic Movement”. Before her decisive consecration she requested that he bless her before this step. Joyfully, she said, “He came and fulfilled our request; it was like when parents bless their children before they take an important step into life.”

The consecration prayer, which the founder chose for the first solemn consecration from the various proposals, came from Gertrud’s pen. This consecration became the guideline of her life. Shortly before her death she wrote: “I ask for a special powerful memento on the 16th of April.

I want to renew the consecration as well as I can, also in the wording. How seriously did the Mother take the dedication! One year now I am ill and see no end. But I take back no letter of the consecration, you tell that to the Mother in the shrine “(1930).

Again and again, Father J. Kentenich pointed out the importance of her life, her sacrifice for the development of the women’s movement. “She really stands before us as the ideal of a true Schoenstatt woman” (1940). She found her way to Schoenstatt as a mature woman. Compared to Josef Engling, who, as a young man, let himself be completely seized by Schoenstatt’s school of education, Father J. Kentenich, referring to Gertraud von Bullion, describes it shortly after her death:

As to how our system of ideas was taken up and worked through in a different religious cultural epoch, even more so by the soul of a woman who came to us as an essentially finished personality, you can read the biography about the Countess of Bullion, “Serviam.” If he (Joseph Engling) went the way per Mariam ad Jesum (Deum), she (Gertraud von Bullion) went the other way around, as you will find: per Jesum ad Mariam” (1933).

In a reflection from the year 1953, the founder shows the importance of these first ones in the spiritual history of Schoenstatt: “The consecration prayer that came about may be understood as an expression of the spiritual attitude of that time and as a model – similar to Joseph Engling, consciously or unconsciously – on which all later consecrations can be oriented. … The prayer points to a height that cannot easily be surpassed. It was born independently of Joseph Engling, but not independently of the maternal Educator, who carried the first ones of the men’s and women’s movement in her heart and shaped them with a faithful mother’s hand according to a secret model – visible for all following generations – in an original and individual way. … The following development of the individual and the community shows that the consecration with its meaningful content was not only a wishful dream, but was dead serious, and became a way of life.