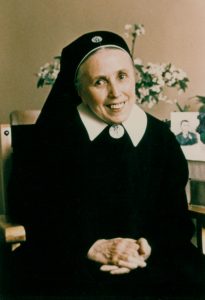 Emilie Engel belonged to the first women’s group who, on April 16, 1925, by a solemn consecration, made themselves completely available for the mission of Schoenstatt.

On October 1, 1926, the founder called her to help found the Institute of the Schoenstatt Sisters of Mary.

Her beatification process was opened on
October 12, 1999 in Trier and on
May 10, 2012, Pope Benedict XVI recognized by a decree, her heroic virtue.

She grew up in an intact farm family in the Sauerland region.  Emilie Engel worked as a teacher in the Ruhr area and was greatly involved in solving social problems. In 1921 as a young teacher she came in contact almost by chance with Schoenstatt. That changed her life decisively. In retrospect, she confessed, “I did not know yet that the Blessed Mother had drawn and led me to help me here at this place of mercy, to come out of the great melancholy, in which I had so often pleaded with her for help; I did not suspect that I was entering a school where I was to recognize my true purpose in life and be prepared for it “(1925).

She put her life radically in the service of Schoenstatt, not only outwardly, but also interiorly.

Through all ups and down of her spiritual journey she oriented herself exclusively on the instructions and guidance of Fr Kentenich. The ideal of holiness became the shining star of her life: “I want to feel especially responsible for the sanctification of all … because then a holiness atmosphere will spread from our community over the whole Apostolic Movement, over the whole Church, over the whole world “(1927).

Father J. Kentenich appointed Sr. M. Emilie to the General Council of the community and entrusted her with the education of the young vocations. Despite her severe TB disease, he appointed her provincial superior. Sr. M. Emilie was a woman whose youth was marked by crises and mental distress, but she did not break because of this, but matured to a childlike security in God, to a detached responsibility for herself and others.

Her life became, in the words of Fr. J. Kentenich, a testimony of God’s merciful fatherly love, and of the correctness and usefulness of the Schoenstatt spirituality, which is capable of forming free, strong personalities. Sr. M. Emilie can show people of today an ideal of holiness that has nothing to do with perfectionism, but rather, how the failures, mistakes and weaknesses become a springboard into the arms of the “infinitely merciful Father-love”.

Shortly after the first meeting with Father J. Kentenich, Emilie Engel asked him to become her spiritual director. Since he had just completed his 35th year of age, which he had set as the limit for women’s pastoral care, he agreed. 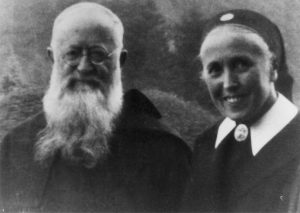 An extensive monthly correspondence reveals what Father J. Kentenich summarized in retrospect of her life and thus characterized his own role:

“Leadership guidance and being bound to the leader have played a major role in the life of the deceased since 1921.”

“Relatively quickly and deeply they are perceived, affirmed and realized by her as an organic father-guidance and as an organic father-bondedness. Organic father-bondedness connects this and other fatherhood in terms of ideas, minds and life to an organic wholeness. It is – in addition to mysterious acting powers of grace – the key to the full understanding of her life. It was also the means used by God’s fatherly goodness and fatherly wisdom to protect her from the imminent catastrophe of physical and mental collapse and to bring her up to the summit of the mountain of perfection. If, in general terms, a conclusion on the effect on the cause is justified and permitted, then one may and must in this case draw conclusions about a very sound leadership “(1955).

Emilie trusted unshakably in the guidance of Fr. J. Kentenich, and went the way of all devotion and holiness like a child on the hand of Heavenly Father. She remained faithful to all his instructions, even though she could no longer personally ask him anything in the last years of her life. “Let us never forget what we all owe to Father …” are her farewell words to the sisters of her province.

“Divine Providence be praised in my life. Glorify the mercy of God and the Blessed Mother! For all eternity I want to sing the praises of compassionate fatherly and motherly love – a praise-offering of mercy … I cannot yet send greetings to Father, but I will be close to him from eternity – and show myself grateful, as much as God makes it possible for me “(1955).

At the end of her life, Emilie embodied the ideal of a Schoenstatt Sister, the type of woman, as the founder succinctly characterized her in a letter from the 1942 prison, and which was taken up in the funeral address: “There is nothing as similar to God as a noble woman who in noble ease and simple, God-filled self-possession calls this spirit of bridled freedom her own, that is, a sister of the dear Mother of God, as I would like to present her to the Church. “

This belief is shared by many people. Impressive is the testimony of the founder himself, who wrote a study of more than 500 pages about her life shortly after her death: “For the women’s movement Sister Emilie should have a special meaning. She comes from its very beginnings. She was a leader until the end of her life. She also embodies – albeit in her original way – the very first concerns of the family. …

She had a very fine sensitivity for everything that was somehow related to being small or to being a child, that was connected with humility, trust and love. She was happy to hear the words that Holy Scripture applies to the Blessed Mother: Because she was small, she pleased the Most High. Favorite music for her ear and heart was the axiom: It is you who does the greatest works only through the smallest ones and works only on the smallest. Or the other: a child is endlessly capable of development and open to the divine “(1955).