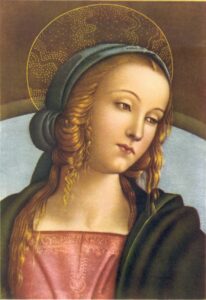 “I am the Immaculate Conception”

Mary’s predilection as the Immaculata points to the sublime degree of her holiness. Her spiritual wealth constitutes that dimension of her being, which is veiled to the outside and transcends time and matter. In its depth, it is known only to God.

In every instant of her life, Mary is receptive to divine grace. “This she is for herself; as representative on our behalf for all of creation; for our benefit and as an example for our imitation.”[1] Therefore the Immaculata is simultaneously our Model and Educator towards holiness.

Father Kentenich employs a trilogy— Credo, Confiteor, Magnificat —when highlighting the aspects of Our Lady’s pedagogical task as a model for the Christian life. He argues that full acceptance of the dogma of the Immaculate Conception implies a firm Credo in the human person as God’s image and likeness, in the existence of the supernatural order of grace, but also in the existence of original sin and redemption. Moreover, this Credo denotes that man and woman are created by God as equal in their dignity and complementary in their manner of being human.[2] This biblical teaching, clearly distinguishes itself from the “gender hodgepodge”[3] of our time. Just as Mary was uniquely graced through the privilege of her Immaculate Conception, each human person, through the sacrament of baptism is also elevated to the supernatural order. This gift of God’s infinitely merciful love offered to each human person, signals an invitation to freely cooperate in the work of redemption, just as Mary herself did. Men and women are to learn from Our Lady’s attitude of serving as expressed in her fiat. Above all, Father Kentenich was adamant that all confusion regarding authentic womanhood is dispelled through the Immaculata, who is the ideal model of feminine dignity and beauty.

Notwithstanding our election as children of God, mirroring ourselves in Mary, the paradigm of the human person, entails recognition and acknowledgment of personal culpability and should result in a genuine Confiteor.[4] This “feeling of guilt” concedes the need for redemption and includes the admission of having freely deviated from the order of grace.[5] Father Kentenich noted that in a world where the sense of sin, guilt, and shame has weakened, the Immaculate as visual instruction of the God-willed human person is crucial. He was convinced of the Purissima’s pedagogical and psychological significance because “the deepest and truest longing of humanity and each individual is the paradise person.”[6]

Finally, Mary’s Magnificat expresses optimistic realism in God’s power, mercy, and faithfulness.[7] With her canticle, Mary teaches us an eloquent lesson about a harmonious human-divine relationship. Father Kentenich observed that with one exception (cf. Lk 1:48b), “all other parts of the Magnificat…circle around the eternal God, around his way of government.”[8] Thus, it should be with the melody of our own lives, as well.