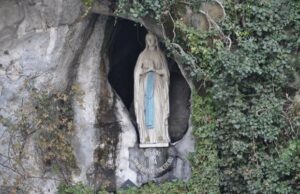 “I am the Immaculate Conception”

In 1858 at the Massabielle rock near Lourdes, France, Our Lady identified herself to Bernadette in the local dialect as the Immaculate Conception, thereby confirming the dogma promulgated some years earlier on December 8, 1854. This self-revelation belongs to the core of her message to the 14-year-old peasant girl and is unique compared to other Marian apparitions.

We may wonder, what does it really mean that Mary is the Immaculate Conception?

As the Immaculate Conception, from the first instant of her existence the Blessed Virgin Mary embodies and proclaims the immaculate concept of the human person as God’s image and likeness. Thus, the ideal blueprint that God designed of every human person radiates forth in Mary’s person, body, and soul. She is the personification of the re-created order in Jesus Christ who, as the Way, the Truth, and the Life, challenges all people to perseveringly live up to the divine concept of our human and religious identity. In Mary of Nazareth, we behold the eminent and transcendent model of what it means to attain the fullness of life in God and to be completely committed to the vocation received.

Schoenstatt’s founder, Father Joseph Kentenich (1885-1968) emphasized that the Immaculate Conception draws attention to the dignity and value of the human person. Thanks to her preservation from original sin and her intimate union with Christ, Mary possesses the fullness of natural and supernatural life.  Father Kentenich observed that thanks to this gift of integrity, donum integritatis, “there is at least one human being who walked upon this earth completely pure and untouched.”[1]

The life and mission of the Immaculate Conception is an object lesson that can be likened to a book that leads heavenwards. Father Kentenich encouraged his spiritual family to frequently page in this book thereby to gaze at this personification of divine love, whose reflection we may and should become.