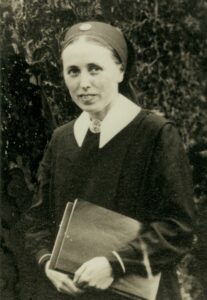 Ninety-five years ago, on June 29, 1927, Sister M. Emilie Engel offered her life for the holiness of the community of the Schoenstatt Sisters of Mary.

an unnoticed grain of wheat, which nevertheless brought forth rich fruit.

What was the context of this offering?

Just eight months pior, the community of the Schoenstatt Sisters of Mary had been founded and Sister M. Emilie was one of the first members. She was aware that she had been called by God to be the foundation of the new spiritual family. Because she had belonged previously to the Schoenstatt Federation of Women, her love for the ideals of Schoenstatt grew more and more and her striving for holiness became more concrete. Thus during her week of retreat she looked back upon her spiritual life and renewed the great desire of her heart: to become a saint.

A saint in a community of saints

During his exile, Father Joseph Kentenich quoted an article by Father Riccardo Lombardi in which it says that our time does not need saints in isolation, “but a community of saints.”[1] Father Lombardi wrote:

“It takes years until a tree is grown. A few days are enough for a meadow to become green, when many seeds have been sown in the earth and a ray of sunshine warms them.”
(The tree is an image for great saints. The meadow with its many little flowers is an image for a community of little saints.)
“Many ‘small’ saints must unite in a community of holiness that covers the surface of the earth….“
Souls are needed who dare to live the spirit of Christianity as a “Mystical Body.” Not as individualists, not as lonely heroes … A group that aspires to a new style of life …”

Sister M. Emilie was convinced that nothing less than a community of saints could affect the apostolic activity needed for the transformation of society.

She dared to set out like a seed, to take the first step, to take upon herself all suffering, as a pledge of holiness for all the Schoenstatt Sisters of Mary, the apostolic movement, and the Church, so that in this way the world can be sanctified. 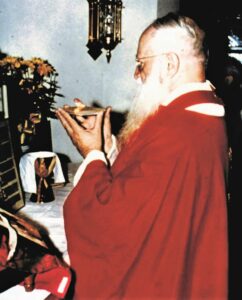 United with the sacrifice of Christ

She united her sacrifice with the sacrifice of Christ in Holy Mass because she knew that then it had infinite value. She did this consciously through the hands of the founder in his Holy Mass.

“Lord, let me ripen like a kernel of wheat so that I will be food for the hungry, the ailing. Lord, let my whole life be a self-giving, then I am empty of myself, and ready for the harvest of eternity!”[2]