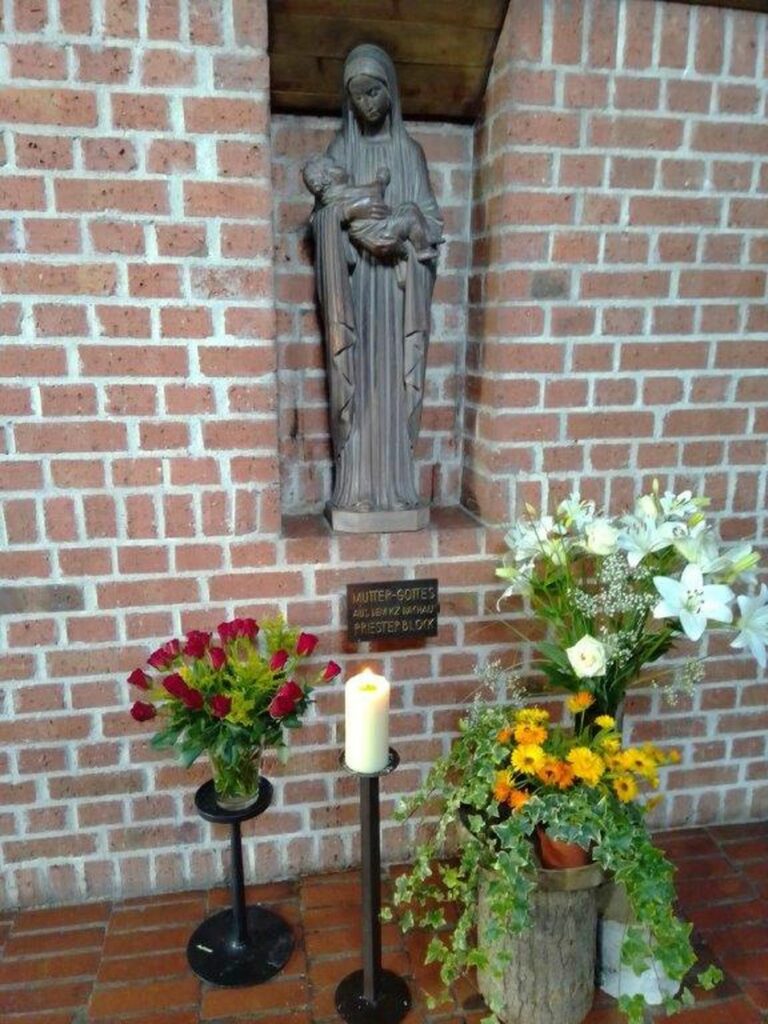 “Hard times
teach us to pray…”

one used to say. Is that still true today? Fortunately, there have been many prayer initiatives during the pandemic–not only through the official Church. Many people also have been reached through the internet.

For weeks the Ukraine-Crisis has been going through my head:

“If only someone would suggest
an intense prayer outreach.”

All we ever hear are “situation reports”, accusations, suspicions, further “saber rattling.” We have to watch almost helplessly. But one thing we can do: pray and sacrifice.

I have experienced that elderly co-sisters will pray the “Prayer in Need” for weeks or even months in difficult sitations, in political situations. Thus I, too, learned to pray this prayer and to treasure it. Soon I could pray it by heart. In 1944, in the concentration camp of Dachau, in a time of great distress, Father Kentenich formulated this prayer and together with other prisoners turned fervently to the Blessed Mother.

From spring on, in the year 1943, in the simple chapel of the Priest-block 26 in the camp, there was a statue of the Blessed Mother. This “Camp Madonna” had been secretly smuggled in. Certainly many prisoners received consolation and help from it.

Let us meditate on the Prayer in Need verse by verse (See below).

Let us put ourselves and the many people throughout the world in distress under the mantel of the Mother of God. Let us trust in the great intercessory power of the Blessed Mother  with her Son Jesus, and with the Triune God.

I advise those for whom the Prayer in Need is too lengthy to pray this short interjectory prayers.

And those who have more time, can pray:

“You are mighty, deliver us from distress and danger,
for where human help is lacking, yours is not
No, you cannot spurn the fervent supplication of your children.
Show that you are our mother where the need is greatest ”

Or the short Prayer of Confidence, likewise composed in the concentration camp of Dachau—also known in German as the “Miracle Prayer.”

“I trust in your might, your kindness, Mother dear.
do believe that you are always near.
Schoenstatt’s great Queen, O Mother mildI blindly trust in you and in your Child.”

I learned the term “Miracle Prayer” from pilgrims. When I was underway with them on a bus, these people told me that their former paster—a Schoenstatt priest—taught them the prayer, telling them to pray it when they needed, for example, good weather for the crops or for something else. It has worked “miracles.”  It can do so again today. We have to trust:  “Ask and you shall receive,” Jesus told his Apostles then, (and tells us) also—today.

Let us pray intensely for the powerful of the world, for the masterminds behind the scenes, for the suffering people, refugees, prisoners, the ill, the hungry, and the dying…Let us ask the Holy Spirit to help all those working for a diplomatic solution.

May the Holy Spirit help people discerning spirits, that they seek the truth and not fall for fake news.

I recommend The Rosary for those who want to take more time, or at least a decade of it. In Fatima and other Marian pilgrimage places, the Blessed Mother requested urgently that the Rosary be prayed

It is a special gift if we entrust ourselves fervently to her, consecrate ourselves to her, so to say, inscribe ourselves into her heart as do those in love. It can be ascertained that after Pope Pius XII consecrated the world to the Immaculate Heart of Mary on October 31, 1942, Hitler no longer won a victory. Things went downhill from there, even though the terrible war lasted almost three more years.

Has mankind really not learned anything? Not without reason

is written in many languages in the Dachau concentration camp memorial and in other places.

Like the speaker of  Dachau, I would like to work to make it a reality. Alone we are weak. We need to be united. Above all, we need the Blessed Mother, our kind and powerful Mother, our intercessor. Father Kentenich taught us that she is ready—like a good Mother does—to educate us to become firm, free, people of character. He suggested this already in 1912 as spiritual director of his students. This was his program for life which became Schoenstatt’s goal: the new person in the new community.