Today I received a letter from the pastor of St. Kunibert Parish in Gymnich. I knew immediately: It was the annual invitation to the commemoration of the birthday of Father Kentenich. Actually, on November 16, 2021, we are celebrating the 136th  birthday of Father Joseph Kentenich! Unfortunately, I cannot participate in this celebration, but then, for what are we living in the twenty-first century?! Inspired by the letter, I will make a

As a Schoenstatt Sister of Mary, I am very attached to Father Kentenich. He is the founder of our community. In the course of my life I have read many of his writings and absorbed many things from him. His charism fascinates me ever anew. He was moved by the changes of our time and the great problems of the people. He searched for answers to the pressing needs of the time. 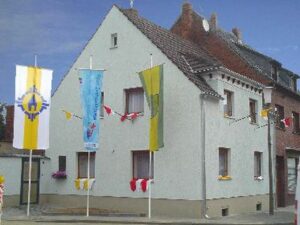 The small village of Gymnich in the vicinity of Erftstadt near Cologne is the place where Father Kentenich’s journey of life began. He was born there on November 16, 1885. What all might Joseph Kentenich have experienced here?

His place of birth at Kunibertusplatz in Gymnich is visited and cared for with great dedication by the Association for the Promotion of the Birthplace of Father Joseph Kentenich.

The inconspicuous residence is marked and adorned on the photo. The festive day has already been prepared!

A Plain Room in the Attic 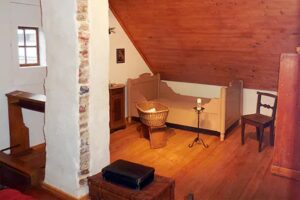 The house is not large; it was built and furnished entirely in the style of the time.

The goal of my tour is a very small room on the second floor. The plain room in the attic is the place where Joseph Kentenich was born.

The living conditions of that time do not correspond at all to our feeling of life today for space, freedom, and development.

The room has been restored with exhibits in recent decades. This assists me in putting myself into the events of Father Kentenich’s birth and childhood. Here a great life had an unassuming beginning. 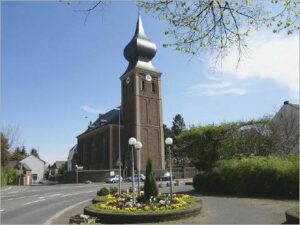 St. Kunibert‘s Parish Church in Gymnich: This church with its striking tower attached to it attracted the young Joseph Kentenich. With his playmates he ventured to the top in order to explore the hallowed old walls. When pursued, they took off and escaped.

That makes Father Kentenich so likeable for me: Even a person with a great divine mission of international scope could be a real rascal as a child and had original pranks in mind!

Shaped and Formed by his Love for God 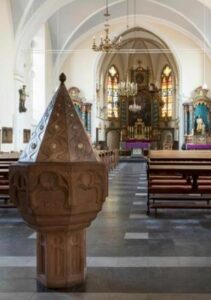 Now I would like to make a visit to the church. Right at the entrance is the baptismal font which reminds me of a special experience in the life of little Joseph Kentenich.

On November 19, 1885, Father Kentenich was baptized at this baptismal fount which is still used today, and he received the name Peter Joseph. Here he was accepted into the Church.

His life was shaped and formed by his love for God and his closeness to God. Later, as the founder of the Schoenstatt Movement, he unfolded for many people the baptismal covenant as a covenant of love. He showed ways to form one’s personal life out of this reality. He pointed to the Blessed Virgin Mary who, as the Mother of God, leads us deeply to God.

How enthusiastically he could speak about her! I like to listen to the numerous audio files that we have from Father Kentenich. When I listen to him give a talk, I immediately notice his Rhineland accent.

His Bond to his Homeland 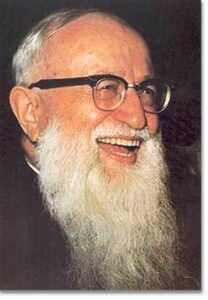 Father Kentenich was a true Rhinelander. He loved his homeland.

How would he react if he visited the towns and cities in this area today and would see the magnitude of the flooding disaster of this past summer? First of all, he probably would have genuine human compassion and would speak words of consolation and encouragement –perhaps like he did after the end of the war when he was released from concentration camp of Dachau in May of 1945. He spent some time with the people of Ennabeuren in the Swabian Alps before he could return to Schoenstatt.

“At the moment we find ourselves in a very difficult situation… Aren’t we like the Apostles at sea? The waves were becoming higher and higher, the ship was violently being cast to and fro, the Apostles were afraid… When it seemed the worst, they woke up Jesus… He commanded the storm and the sea… Why do you doubt?… You know only that which is permitted from above can happen. My watchword in Dachau was… “The Mother of God will help!” We say to her: Show that you are our Mother and I will show you that I am your child… Therefore , let us have trust as solid as a rock in the providence [of God]!” (Excerpt from a Talk on April 22, 1945 in Ennabeuren)

My visit and short tour through Gymnich ends with a petition to the birthday child, Father Kentenich: Give us your courage and confidence so that God can also be at work today and find solutions where we do not. Be an effective intercessor before God for the many people suffering in your homeland.