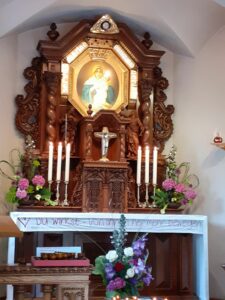 Effective in a unique way:
Mary, the Mother of God

“You are making impact. Take action more from the within.”

This motto of the Congress of Women invites us to look at the Mother of God in a special way. She is effective in a unique way and she is so from within. She is so because of her special bond to the Father in heaven. She is effective in the world because she is totally given to God, because she is totally open to God. This becomes especially clear in the mystery of the Incarnation.

By becoming the Mother of the Son of God she acts in a unique way in the history of salvation. She is, first of all, the mother of her Child. Her maternal love, her maternal care, her maternal education ensure that her Child can develope in his entire being.  Also with regard to the Savior and his mother, we can perceive in a very human way how the maternal care of Mother Mary provided the framework of conditions for the child’s life to develope.

But Mary is not the mother of just any child, she is the Mother of the Redeemer. By giving birth to the Redeemer she participated decisively in the salvific event of God. Through her willingness to be the mother of the Son of God, she played  a role in the Word of God entering this world. She is the gate through which heaven entered this world. But this decisive action had a prerequisite: her willingness to place herself at the disposal of the Father in heaven, her openness for the working of the Holy Spirit within her.  Precisely because the Blessed Virgin Mary was open for God her action became fruitful for all of humankind. She acted from within and thus moved greater things than she perhaps ever dreamed possible.

How the Mother of God acted from within is visible in three situations.

We think, first of all, of the visit of the Blessed Mother to Elizabeth. She learned of the pregnancy of her relative from the angel She knew Elizabeth was advanced in age and therefore it was a high risk pregnancy. Irrespective of her own pregnancy she immediately set out on her way to assist Elizabeth. It is precisely this  selflessness that leads to an encounter with God.  The Blessed Virgin Mary didn’t think: I am carrying the Redeemer under my heart. Now I’ll go to Elizabeth and then she and her child can encounter the Messiah. No, that’s not what she thought. She saw a need and she wanted to help. She had an inner need to help, but it is precisely through this that she carries the Savior into the small family of her relatives. There is an encounter with God because a woman very selflessly acted from within.

The wedding at Cana

Or let us think of the wedding at Cana. The Blessed Virgin Mary perceived a need. It is possible the bride and groom had not yet noticed what an embarrassing thing was about to happen: so many guests and no more wine! The feast would have had to come to an abrupt end and a shadow would have been cast on the new marriage. But the predicament doesn’t escape Mary in her womanly attentiveness and vigilence. She knows what to do: Only one person can help her and that is her Son. She doesn’t know how but she has the greatest confidence that he can bring about a solution. Mary doesn’t bemoan the hopeless situation but trusts from within. She instructs the servants to do what her son commands them. The servants seems to know her, otherwise they would not follow her instructions so readily. The miracle of transformation that saved the honor of the bride and groom happened because there was a woman who in genuine womanly sensitivity and attentiveness perceived what was happening around her and because she trusted from within that her Son, that God, would provide a way to help them out.

We think not least of all of Golgotha. The Blessed Virgin Mary stoods under the cross, her heart bleeding. She saw the suffering of her Son and she suffered with him as only a mother can suffer with her child. She stayed in the background during the public life of Jesus, but now, at this decisive hour of his work, in the hour of his surrender on the cross, she stood there at his side. That is an expression of her maternal faithfulness. She felt the need from within to be near him, to be with him, fully human and simultaneously firmly trusting that God held everything in his hands. The Son responded to this loyalty of his mother by giving her a new mission: She was to be no longer his mother only, but she was to become the mother of all those who are united to him in love. The Blessed Mother became Mother of the Church because she was a woman who from within stood loyaly by her Son and his mission.

Becoming fruitful from within

“You are making an impact. Take action more from the within.” This motto of the Congress for Women invites us to look at the impact of the Mother of God, how she acted from within. It invites above and beyond that to look at the impact of all women who contribute from within in a genuinely womanly way so that life can unfold and relationships can grow. It invites us to strive for genuine inner growth, so the actions of each of us can become fruitful from within.