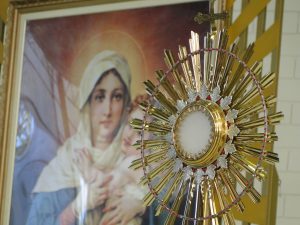 “Prayer always changes reality,” says Pope Francis. These words confirm Father Kentenich’s thoughts and actions. Since the foundation of the Schoenstatt Movement, he has promoted a strong Eucharistic current, connected with a universal apostolic apostolate. “Prayer renews the world,” he once said.

“In Christ we go to the Father and we are children of the Father”, this describes the basic attitude of the Sisters of Mary. Since the founding of the Institute, adoration has been very much cultivated, and since January 13, 1927, 12 hours of adoration have been held daily in the Original Shrine! But it was not enough.

I give you the CHILD!

On Christmas Eve 1929, 90 years ago, at the request of the Sisters, the father and founder opened the door of the tabernacle in the Original Shrine with the words: “I give you the CHILD!” Since then, the Sisters have been holding adoration before the Blessed Sacrament 24 hours a day. So it happens that day and night, every second, somewhere in the world, a Sister of Mary prays in front of the open tabernacle to praise God, to thank Him, to ask for His graces, and to offer sacrifices of reparation on behalf of the Schoenstatt Family, the Church, and all humanity. Only heaven knows how great the sea of grace is, and how it has affected the whole of humanity.

A group of Sisters of Mary has the task of dedicating themselves to adoration as their main profession. Thousands of people participate in this current and are united as members in a circle of adoration and prayer.

Our restless time with its rapid changes needs the power of God. We must pray that we will be able to hear the voice of God during this time. The power of prayer opens us to the action of the Holy Spirit to discover the love of God in our daily lives and to respond with concrete action. In this way we can help to build a new world.

Prayer requests can be sent to the following address: