“You are a mission!”

Pope Francis calls us, in the month of world mission,

to reawaken our enthusiasm for the good news of Christianity and to spread it courageously in today’s world. Father Kentenich, the founder of the international Schoenstatt Movement, expressed it this way: “Mission is the idealism of Christianity!

As a missionary sister, I was allowed to spend 30 years in Brazil: initially a few years in Sao Paulo in the parish of St. Boniface, the parish of German-speaking Catholics. Among other things, I was a catechist and religion teacher there. Then I lived in a small town in the interior of the state of Sao Paulo in a children’s home with 100 children aged 4 to 14. These children all came from the outskirts of the big cities. After that, I worked as a teacher at our institute’s own school in Londrina in the state of Paraná for 20 years. The school grew with the city out of the jungle – from 1936 – and bears witness to the development work of our missionaries. Since 2013 I have been back in Germany and serve the community in our mission headquarters in Schoenstatt.

Due to the influence of the Brazilian mentality and the many enrichments that I experienced during my time in Brazil due to the various challenges (language, climate, nutrition…), I can only underline the word: “You are a mission”.

“You are a mission!”

This also applies to each and every one of us personally. Yes, a mission, an original thought of God and God’s mission, because we are baptized and sent.

The accent is deliberately on “you are …” and not, as one might expect, “you have …”. Why or rather asked how am I a mission? The reflection would like to invite us to spell the word “MISSION” anew. I want to do it with the gaze of a Schoenstatt Sister of Mary:

or how Mary serves Jesus and men, listens to GOD, fulfills His will in everyday things. This is what the Sisters of Mary try through their BEING – PRAYING and WORKING.

As a community, we are part of the international Schoenstatt Movement and our sisters come from about 42 nations and now work in almost 30 countries on all continents. We are active in the most diverse female professions, whether as doctors, artists or catechists, in the home, garden, agriculture or at schools and universities, in social institutions and in the Vatican.

to help the people entrusted to us to find God. Schoenstatt stands for this not only as a place, but as a program: to educate us under the protection of Mary, as our Founder, Father Kentenich, taught us since 1912, to form us into new people who radiate the joy of Christianity. These are people who are great

have at everything. No concern of the Church, the world and fellow human beings is too small that it cannot be supported by our prayer and our small and great sacrifices.

O – This stands for openness and offering.

Contributions that we can make fruitful in connection with Jesus’ sacrifice on the cross – we call this in Schoenstatt “contributions to the Capital of Grace” – or more simply: “we give it into the jug …”. It does not depend on the age or on education, position, health or illness…

To do the ordinary extraordinarily well, faithfully, precisely, to evaluate it … that moves the Blessed Mother and the Savior to encourage us:

So everyone is asked to be such a “spelled” MISSION today. Often we will be like Jesus in the Gospel after the healing of the ten lepers (…) “Were there not ten who were healed? Only one comes back to thank and praise God …” But for this one, the mission was worth it.

Finally, an example that gave me encouragement during my long and not always easy mission work: One of our first mission sisters in Brazil told me about the funeral of a fellow sister. At the end of the funeral, when almost everyone had left the grave, there was a man about 40 years old, who nobody knew. Was he a distant relative??? A sister finally took heart and went to him and asked him if he had known the deceased. The answer was: “I was with her in the kindergarten …” This little example shows us: YOU ARE A MISSION, you leave traces … 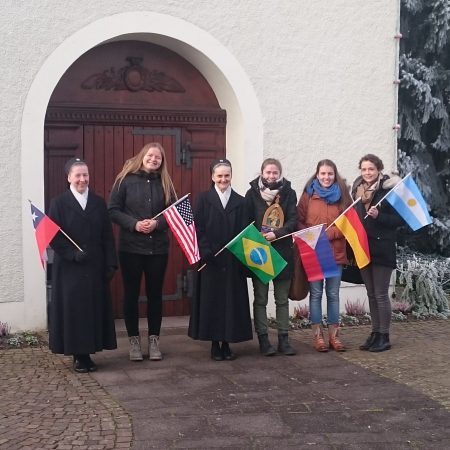 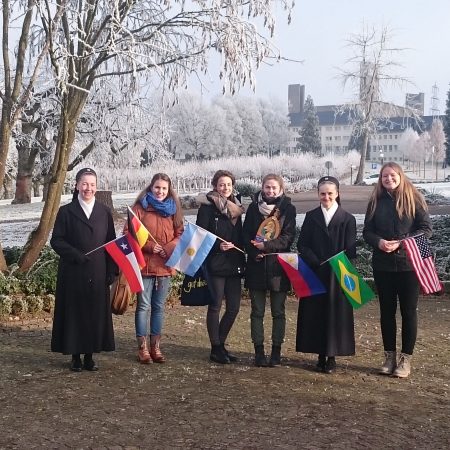 Also in our life we surely find such examples where we may experience: You can achieve something, even if the success is not always the same or we will only recognize it in eternity. It is not the one hundredth hammer blow that causes the stone to shatter but the force of all the 99 others were just as important.

So we do our part—it pays to do this!