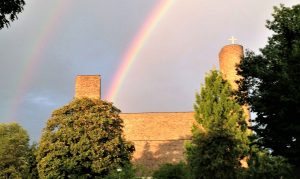 What happened on September 15, 1968, at seven o’clock in the morning in the Adoration Church on Mount Schoenstatt? The answer is as complex as the attachment to Father Joseph Kentenich and the understanding of his charism.

We Sisters of Mary like to say: On this day heaven touched the earth, God took our father and founder to himself, where now from eternity he can work much more than before because he is with God.

Giving new life to the fire of his charism

Pope Francis said with reference to Father Kentenich: “God needs only one person to accomplish great things in the Church and in the world”[1].  To celebrate the day of his death does not therefore mean to mourn the past, but to praise God for the great works he has accomplished in his life and to revive in us the fire of his charism so that he can continue to enlighten the Church and society. We are motivated by the words of Saint John Paul II: “You are called to share in the grace received by your founder and to offer it to the whole Church”[2].

The grace in which we participate is his Marian charisma. It gave him a great love and fidelity to the Church, an unshakable faith in Divine Providence and the commitment to work in the formation of new people for the religious and moral renewal of the world.

The grace in which we participate is his mission: “to proclaim the Blessed Mother, to unveil her to our time … with the specific mission that she has in her Schoenstatt Shrine for today”[3].

Through Christ to the Father

On September 15, 2018, a year ago, we renewed our promise to offer this charism of our Founder to the whole Church and society. Because we believe in the special mission that God has entrusted to Mary in every Schoenstatt Shrine: “To raise Christ again to the throne and to work miracles of transformation”[4].

We thank God for all those who support his mission. As Cardinal Lorenzo Baldisseri put it: “In the person of Father Kentenich, God has given our time a good and faithful shepherd who was formed according to the heart of Christ himself”[5].

He radiated the love of God the Father through his whole being, and many could experience in him what Jesus said: “He who sees me sees the Father”. (John 14:9).