The month of May has been dedicated to the Blessed Mother for many centuries because of its abundance of flowers. We are happy to honor her as Queen of May:

So we like to sing all through the month of May, in which nature reminds us that the Blessed Mother is a particularly beautiful flower in God’s paradise garden of creation. In many areas it is still customary today to decorate the image of the Blessed Mother during the month of May, and not a few communities gather at least on Sunday for a May devotion. In addition, May invites us in a special way to pilgrimages to Marian shrines.

Also in the Schoenstatt Movement, the month of May was from the beginning a special opportunity to cultivate and deepen the relationship with the Mother of God. The first sodalists active in the Marian congregation used May as a special period of striving, i.e. they intensified their self-education, through which they wished to form themselves under the protection of Mary into firm, free priestly personalities, and they brought their efforts to the Blessed Mother as contributions to the capital of grace in the shrine. In this way, they wanted to give special joy to the Blessed Mother. 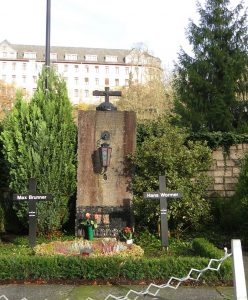 By way of example, this can be read in the life of Joseph Engling, who could confidently be described as a model pupil of Father Kentenich, and whose hundredth anniversary of his death is commemorated this year. So he writes in his diary at the beginning of the month of May 1916: “Mariae! The whole month stands under this sign, even I myself. Queen of May, my mother, I give you this month completely. Everything that belongs to me should be your property. Yes, myself. “[1]

And a year later he notes: “May – Mariae. Mother. May has to bring an upswing to my inner life. Yesterday I did not keep my PE [particulate exams] and I did not even try in the least. Of course, I was not well, but the thought of you and May had to let me overcome this trifle. The organ is just beginning to play in the church. I want to go over to your Son and then arrange the work of my self-sanctification in May. “[2]

Shaping the garden of the heart

Quite consciously, Joseph Engling designs his spiritual aspiration as the design of the garden of his heart, in which he strives to collect many flowers: the May blossoms. He writes: “Mother, the garden of my heart is dedicated to you, for you I want to plant and cherish it.”  He does not just collect good works, but he distinguishes between:

♥   Rose–the rose of love and respect,
♥   Forget-me-not of fidelity in the ministry of the Blessed Mother,
♥   Violet of humility and modesty,
♥   Passion flower of the cross and sacrificial love as well as
♥   Lily of innocence.

Specifically, he notes what he wants to pay attention to and whether and how often he has stuck to it. Thus, as an expression of the violet of humility, he mentions the patient acceptance of rebukes, the forgiveness of insults, and joyful obedience. All events of everyday life give Joseph the opportunity to connect them consciously with the Blessed Mother. For Joseph, these May blossoms are an expression of his love for the Blessed Mother to whom he wishes to bring particular joy.

Not only does he remain faithful to the collecting of the May blossoms when he goes to school in Schoenstatt, but also during his time as a soldier at the front. At the end of the month of May he deliberately presents the May blossoms to the Mother of God as a gift.

Thus he writes in late May 1917: “Dear Mother, the May gift is this time indeed very small, but it comes from the heart, from a good will, which would like to make you happy, but can’t accomplish anything great. Therefore, be content with the few sacrifices and my total dedication to you. I only want to belong to you alone, I want to be your very own, dearest little mother. Volo omnibus omnia fieri [I want to be all things to all]!”  In a letter a few days later, he tells Father Kentenich:” I send to you the May blossoms and at the same time, the list of PE. Your Reverence, bring both to the dear Mother in the shrine. I trust firmly in her protection, even in minor matters. She always helped. “

How Joseph Engling shows our affection to Our Lady

The example of Joseph Engling also encourages us to use the month of May as a special time to grow again in self-education. We are invited to show our affection to the Mother of God in a similar way as Joseph Engling, and to be educated by her according to the image of her Son.

By collecting the May blossoms Joseph Engling has grown deeper into the covenant with the Blessed Mother. This deep connection with her gave him security in the most dangerous situations. In May 1918 he wrote to Father Kentenich: “A few days ago, when the shells struck right and left beside me, I prayed as usual to my little Mother and transferred myself to our shrine. I felt so close to my dear Mother as never before in my life. Her closeness seemed so sweet and lovely; I no longer felt the slightest fear of the grenades. It was a happy state in which I always wanted to stay. How beautiful and exalted, how lovely and reassuring is our dear Mater ter admirabilis. A great longing for our shrine, for you and our dear fellow students comes over me more often. “

This informal and loving way of dealing with the Blessed Mother is for Joseph a firm hold in all circumstances. He understands everything that he encounters in the daily tasks that seems heavy and unpleasant as a service of love for the Blessed Mother. In this way he is gradually led into the highest forms of the Covenant of Love. He is no longer just willing to give the daily inconvenience to the Blessed Mother as a contribution to the capital of grace, but he even offers her his life’s sacrifice for Schoenstatt. At the beginning of June 1918, shortly after completing his May striving, he prays:

“Dear Mother, Mater ter admirabilis, I offer myself to you again as a victim. I offer to you everything that I am and have, my body and my soul with all their abilities, all my possessions, my freedom, my will. I want to belong entirely to you. I am yours. Dispose of me and all that is mine as you please. If, however, it is in accordance with your plans, let me be a sacrifice for the tasks you have given to our congregation. ”

Educated to be a saintly person

So one may view the life-offer of Joseph Engling as the highest fruit of his May striving. Our Lady accepted the offer four months later, on October 4, 1918. Thus, not only the May blossoms, which Joseph has given year after year, together with the other contributions to the capital of grace have become fruitful, but in a special way, the offering of his life. Joseph had given himself completely to the Blessed Mother. She was allowed to dispose of him completely. So she has educated him through his spiritual guide Father Kentenich and formed him into a saintly man. His example of life can also encourage us to give ourselves completely to the Blessed Mother so that she may also lead us on the path of holiness and lead us to be new people who, like her, carry Christ to the people of today and testify to the love of Heavenly Father.