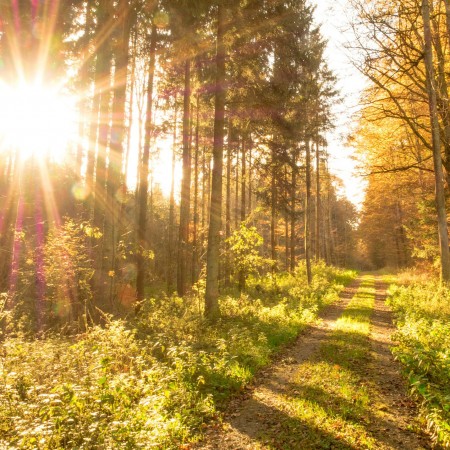 New paths –one needs a little time until one has found them and then also goes along them. That is something I have experienced very practically in this year. A large wooded area very near our house invites one to go walking there. For a long time I always went the same route until one day certain unplanned circumstances made it necessary for me to look for another route through this area.  Since then, there are now four different paths that I take according to the situation and the weather. My horizons have been broadened and this wooded area has become more and more “my” room in which I know that I feel very much “at home”.

This year I would like to invite myself to broaden the horizons of my life, to leave the paths that I have always gone in order to gain interior width. A new, totally unimpressive path could be: to leave the broad path of the self-evident in order to become more grateful.

Do away with the layer of dust of the self-evident

In this New Year we are invited to do away with the dust of the self-evident which often lays a gray veil over the bright colors of our lives. I invite you to look into our concrete everyday life. Where perhaps has this layer of dust gathered?  Father Kentenich once said,”Saying thank you should actually be the basic tone of our soul.” Grateful people are happy people. Gratitude does not depend on getting everything that I want, that I am happy when everything runs the way that I have foreseen. Gratitude flows most deeply out of the conviction that God accompanies my life, that he is so to say present in my life, that he carries me through, especially also through the dark stretches of the path.

When Father Kentenich arrived in the Koblenz prison on September 21, 1941, the Nazis first placed him in darkness for four weeks. The vaults of a former bank had been remodeled into little cells.  The prisoners could only stand with difficulty; they had no sunlight and also no fresh air. It was a tactic of the dictators at that time to use this to make the prisoners crumble and thus move them to make confessions. Later on Father Kentenich described this time like this: From all sides came the cries of doubt from people who had lost their mind in these vaults. He began to sing songs which had a calming influence on the other prisoners. And he encouraged the sisters later on, to learn songs by heart so that they could help in similar situations. In looking back he said that in these four weeks he had not had one single sad minute, not even a sad second.

Strong in the covenant

Remarkable. Father Kentenich did not surrender blindly to his fate. He lived out of the reality which is ultimately the reality of every Christian: God in us! Since Baptism we live in a strong covenant. We know that nations that stand in a covenant with one another are stronger nations. People who live in covenant with God are strong people. Father Kentenich lived in covenant with Mary, in a covenant of love. She was with him and helped him to believe in this God of love, even under the most difficult conditions.

At the moment we do not find ourselves in such a bunker. But also in the coming year I will go on paths that I don’t want to go, that seem to end in a blind alley. There will be detours and traffic jams. How will I handle them?

Let the sun of gratitude arise in our hearts out of the awareness: I am in a covenant with a God who is Father. “But I am not alone for the Father is with me” (John 16, 32) In this awareness, Jesus went his way of the cross.

I also am not alone: Not on the well known main streets of my life nor on the side streets nor on the insecure ways. That is the deepest reason that makes me also grateful in this coming year and gives me the courage to go new paths.