of the Perpetual Presence of the Father

The celebration of the golden jubilee of the Schoenstatt Tabor Shrine of the Perpetual Presence of the Father, which is located in Atibaia, São Paulo, Brazil was preceded by a tridium from September 14-16.

The first day of the tridium, the Feast of the Exaltation of the Cross, had the theme:

The Best of Gold: The Request for Forgiveness.

At 8:00 p.m. an event that was also transmitted online was held with splinters of a cross. Everyone was invited to place their splinter into the jug in the shrine with contributions to the capital of grace and to ask God’s forgiveness for all of the times he or she failed to respond to God’s call.

and a reflection about our father and founder Father Joseph Kentenich: The Bearer of a Great Mission for the Church. Those present shared testimonies about him that somehow expressed their relationship to the spiritual fatherhood of the father and founder and the legacy that he left to the Schoenstatt family and the world – the covenant of love with the Mother and Queen of Schoenstatt.

The third and final day was dedicated to the youth. The theme was 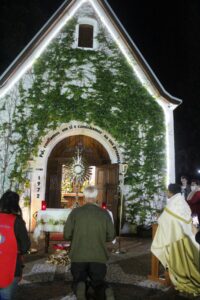 A golden Way – praise and adoration!

The night for youth consisted of camping in a tent, a vigil, and Holy Mass. It brought together about 150 participants and volunteers. The shrine remained open the entire night allowing everyone to adore Jesus in the Blessed Sacrament.

The seventeenth, the jubilee day, began with a Holy Mass at dawn, which was about 6:00 a.m. The youth and the first group of pilgrims who came on foot were present.

At 8:00 a.m. other pilgrims were welcomed with great joy by the youth, receiving a special embrace from the shrine.

There were various activities during the day including the “Schoenstatt Cinema” where the documentary film “Someone Has to Lead the Way” told the story of our father and founder.

Juliana Cristina de Souza Troiano from  Guariba/SP stated that the film “represents the beginning of an inner search we have for God and that we try to show others what God has put in our heart. Someone must take the first step and then go out to evangelize.“ Parallel to the film, there was Eucharistic Adoration in the Provincial House of the Schoenstatt Sisters of Mary and the Rosary was prayed in the tent for pilgrims.

A missionary of the Apostolate of the Pilgrim MTA of Schoensatt, Rosa das Neves de Souza from São Paulo/SP, related: “I feel gratitude and joy that I am here, for many graces received, and for all that the Blessed Mother is doing for me in my life and in my family. ” 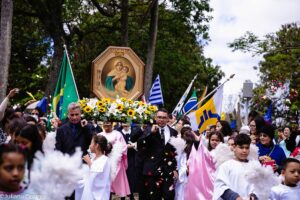 The highlight of the morning was the

The pilgrims gathered in front of the shrine from where they set out on a jubilee procession. It was very moving when the image of the Mother Three Times Admirable, Queen, and Victress of Schoenstatt, was lowered from her throne to meet her children. Many stretched out their hands to the Mother of God and said prayers, not holding back their tears.

As the enthroned MTA picture passed through the crowd the Blessed Mother received a shower of rose petals and was met with songs and Marian prayers. There were three stations for reflection along the way: at the entrance, at the jubilee door, and at a statue of our founder where we also thanked him for his first visit to Brazil 75 years ago. Finally, the picture of grace was returned to its throne in the shrine, and then the pilgrims consecrated themselves to our Mother and Queen and sang a congratulation song for the gift of the shrine. 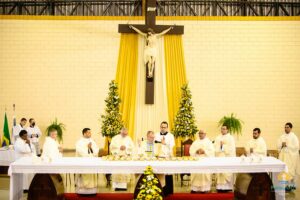 The Holy Mass of thanksgiving for the fifty years of the shrine was said by Bishop Sérgio Aparecido Colombo with several priests concelebrating. The mayor of the municipality Emil Ono and his wife, as well as other authorities, were present.

Deeply moved, Maria Aparecida Gallo from Jundiaí/SP said, “It is indescribable to be here today, to experience the presence of the Mother of God and of our father and founder each and every minute. I was here when the thirtieth anniversary of the shrine was celebrated, then its forty-fifth anniversary, and now the fiftieth anniversary. I cried during the consecration to the Blessed Mother but they were tears arising from the purification of my soul. It has been very beautiful. ”

We thank the Mother of God for all of the graces that she interceded for us. There was a year of preparation for this day that included prayers and contributions to the capital of grace. The Blessed Mother accepted everything and now continues her mission from the Tabor Shrine of the Perpetual Presence of the Father.

Father, we trust in you and we walk in your presence!