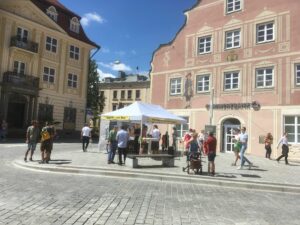 – First Attempts
at Pastoral Ministry
in the City

“This is the first time in my life that I am talking to a nun!”

said an employee of the World Hunger Relief organization, which had its stand in the pedestrian zone in Kempten for a week. My new residence is Schönstatt auf’m Berg (Schoenstatt on the Mountain), near Memhölz, Germany. My religious community has made it possible for me to go into the pedestrian zone of the city once or twice a week as a “missionary.” There many recognize me as a sister or a religious person; many greet me deliberately with the words, “Grüß Gott!”*

But others look away, ignore me, or just pass by. Nevertheless, I am certain that everyone who sees me in the city is suddenly reminded of God. And that is exactly what matters.

Pastoral ministry in the city – nothing new

–  but for us Schoenstatt Sisters of Mary this is not commonplace.

During my first attempt at the end of April, I concentrated on the starting point for my pastoral activity (70,000 inhabitants, 2 km of pedestrian zone): 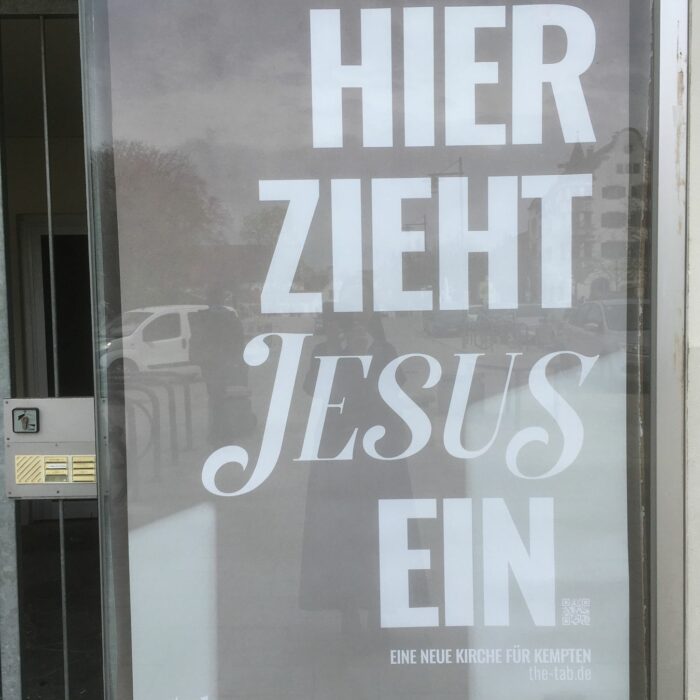 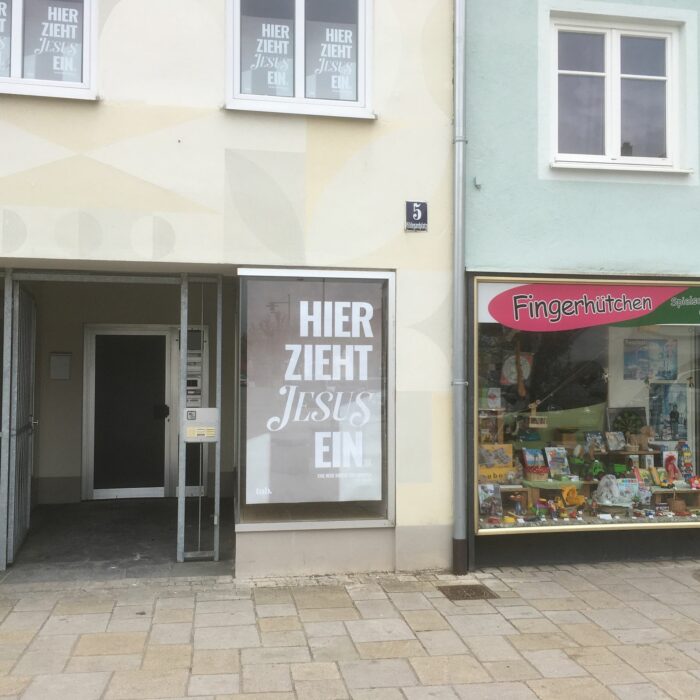 Pastoral ministry in the city– How does “go to church” work?

In the plaza in front of the Lutheran church I found many people enjoying the sun. I looked around and studied two display cases. A young woman who was sitting in front of it made room for me. We began to  converse immediately – just small talk to begin with. She asked if I read the Bible quote at the entrance to the church. “Yes!”

“So, you are also a believer! What do I think of the parables in the Bible?”

I responded positively, enumerated some – but she then referred to the Apocalypse – I left it at that. She spoke of prophecy and the coming of the kingdom of God which is already present among us. The young people meet more often in a group. Their assembly leader was chosen by God. He did not appoint himself.

I explained to her that I am involved in pastoral ministy and would simply like to make God present in the city. She responded, “In the Bible it says that we are a temple of God, so we can bring people into contact with God.” She asked me for my telephone number—I gave her my email address. 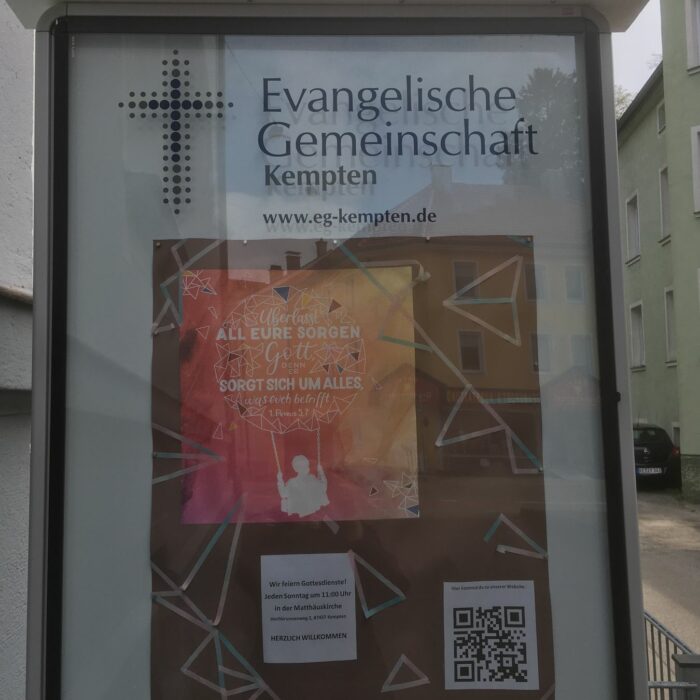 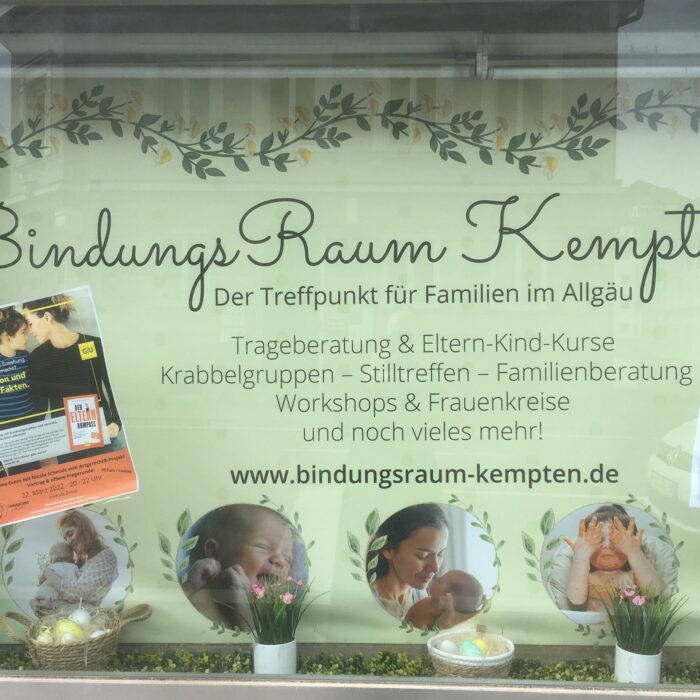 There is much happening in the city on Mobility Day. I came across a stand of bicycles with wooden frames – very unusual! So I started a conversation with the woman who was standing there. She told me that the manufacturer is a very creative man. Taking this cue, I directed the conversation to charisms, talents, etc. Mrs. X.  shared a little about her family – her son and her daughter – and that she never forced her children to do anything. They could choose which of their respective gifts and talents they wished to unfold. “And what is your special talent?” I asked. At the moment she was overwhelmed and she wanted to think it over. Later in the conversation she said she thinks her sensitive nature is something specific that enables her to help her family and other people.

When I arrived at the city hall, I saw a few men sitting on the steps. One of them suddenly waved to me in a  friendly way. Because the man had a bottle next to him I really didn’t know— if I should speak to someone who was drinking…but no, the man was not drunk. He was quite normal. He told me that they had just finished work (Satuday around 3:30 p.m.). He thanked me for the nice/good conversation the other day in the city. I guess he had given me directions! I thanked him again and explained that I have a poor sense of direction and that I am very glad there is Navi and GPS. “And who is your Navi and your GPS? That is our Lord!”
“Oh” I said,  “That’s right.”
“You are surely very close to the Lord—I am not? ” “I don’t believe that!”
“I am much too outspoken.” “That doesn’t matter. You don’t have to be well-behaved or perfect. That isn’t what matters in the end! ” 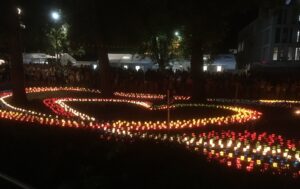 It is nice to experience

that the Mother of God accompanies me from the Schoenstatt shrine to the city. The same happens from the heart shrine.

Often our brooch with the image of the MTA is a bridge for that to occur. Many see the brooch and at least recognize it as a religious sign.

More than ever, significant passages from our daily prayers come to my lips during this apostolate:

“Let us be apostles of your love in the midst of the world.” – “Let the world see your miracles.” (Heavenwards)

* A greeting that cannot be translated directly into English. Grüß means greeting. Gott means God. It is a way to say hello in German.