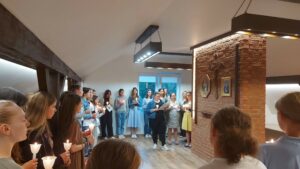 The girls and young women who come to our Schoenstatt Center in Otwock had a dream for many years. It was to have a place which they could use not only for training but also for their meetings and celebrations. We Schoenstatt Sisters of Mary understood their need and wanted to fulfill their wish.

In 2013 we began to search for a suitable place. Several attempts were made to repurpose existing rooms on our property. Finally we looked for a place that had not been used by anyone before, and so we found the attic of a farm building. When we were modernizing the Provincial House and the Retreat House, windows had been inserted in two walls of the building. But then we had to stop working on the project.

For several years the youth had been raising money for this project. Meanwhile the young women from one generation have married. Some of them have children and have joined the Schoenstatt Federation of Families. The next generation became even more involved with the project and the project continued again after 2016. The youth made commemorative cards and rosaries, baked waffles on different occasions and donated the proceeds to this purpose. 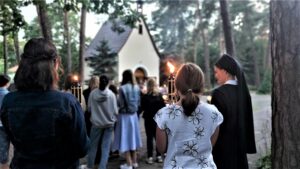 We were aware that the money we had collected was not sufficient, but nevertheless, we took concrete steps to reach our goal. Thankfully, the Blessed Mother sent us many people who were willing to help and we could begin with the work. A plan was made for this project of renovation and we started converting the building.

But before construction began we entrusted everything to St. Joseph. Our Holy Father Pope Francis had proclaimed this very year 2021 as the Year of Saint Joseph. On March 19, 2021, the leaders of the Schoenstatt Girls’ Youth in the Diocese of Warsaw-Praga and the Schoenstatt Sister who works with the youth met in the attic. They put up a picture of St. Joseph and formulated a prayer entrusting the project to St. Joseph. On the nineteenth of almost every month that followed, St. Joseph demonstrated that he had taken charge of the construction. On this day we would receive responses from authorities, information about financing of the project, or benefactors who contributed to the furnishing of this room. 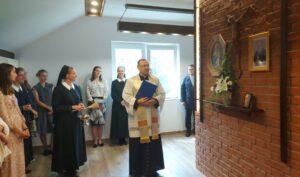 All of this, of course, took time and required patience, but finally the room was dedicated by Bishop Jacek Grzybowski, the Auxiliary Bishop of the Diocese of Warshau-Praga on July 8, 2022. The date was convenient for the bishop and a sign for us of the blessing of our father and founder; his priestly ordination was on July 8.

Now the Schoenstatt Girl’s Youth officially has a space which is just for them. Precisely on July 8, 2022 they were having a national convention in Otwock. On the evening before the dedication the girls and young women invited the Blessed Mother to dwell in their room. They brought their crowned image of the MTA to the Shrine and then renewed their ideal of the living crown in their new space.

At the dedication one of the young women said she could hardly believe what was happening before her eyes.

Until now it was a great dream; now it has become reality.

The girls and young women can use the room not only for training but as a space of encounter. New life has been created. Here they exchange ideas, celebrate namedays, birthdays and so on. They are using this space with joy.