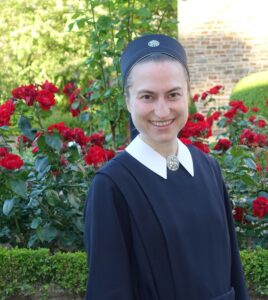 At the next symposium of the German Terminology Day (DTD) in March 2023, Sister Carola Maria Tremmel will be awarded the DTD Promotion Award 2021 for her research in the field of the science of terminology.

How it came about – a look behind the scenes

Who has not spent much time and energy on the translation of a text? And every time it’s almost like starting all over again. This, or something similar, is what several Schoenstatt Sisters of Mary go through repeatedly. There are many texts to translate that are sent around in the community, or many books and writings that are fundamental to the Schoenstatt Movement that should be available in the language respective to a specific country. Couldn’t there be a more effective way of working together, especially in this age of information technology, in that vocabulary and text modules could be restored and retrieved at will?

In the context of her translation studies at the University of the Applied Sciences of the Language and Interpreting Institute in Munich, Germany, Sister Carola Maria attempted such a project for the Schoenstatt Sisters of Mary and possibly others. In the process, she asked the sisters who translate how they go about their work and what tools they use. Not infequently, concepts that are important in the Schoenstatt spirituality  are rendered differently in the same language. Although there already exist vocabulary lists for typical Schoenstatt terms, the lists are mostly not updated and continued.  Couldn’t we work more as a team and learn and profit from each other?

In the course of her studies, Sister Carola Maria discovered that such a practice already exists in companies in the industrial world. There, in coordinated cooperation, a multilingual entry is created for a so-called terminology database, which is then useful to the internationally networked companies in the translation of technical texts.

Is such a process conceivable also for the Schoenstatt Movement? Sister Carola Maria dreams of one. In her thesis for her bachelor degree, she was able to demonstrate that a process for terminology can also be developed for the community itself and promises a high level of benefit. Terminology that has already been developed could be saved in a database and made available. In this way duplicate work could be avoided and the time needed for translation could be reduced. Consistency in language would be promoted and the quality of communication improved.

Meanwhile, Sister Carola Maria has already put some things into practice. She has succeeded in putting much of Schoenstatt’s existing terminology into a database. In the coming months she will, per video conferences, present the process within the community and invite others to collaborate. Then her co-sisters can profit from the new databank.

Sister Carola Maria’s research was well received: Next year, she will receive the German Terminology Day Award, which is given for exemplary or particularly forward-looking work in the field of the science of terminology and terminology work. So far, a dissertation on translation-oriented technical dictionaries, a practical project of the German Institute for Standardization, and a master’s thesis on the illustration of term relationships in a database have been awarded prizes.

Sister Carola Maria was able to demonstrate in her work that terminological recommendations from the specialist literature and process models can also be transferred for use outside of the classic areas of application, such as industry and government, and present an optimistic future. She used the case study of the Secular Institute of the Schoenstatt Sisters of Mary to show how a practice-oriented process model can be developed for the elaboration of a multilingual entry in a terminology database. Thus, the work simultaneously provides a practical guide–for organizations outside the usual application areas of terminology work—for designing a process model that can be adapted for other purposes, if necessary.

The award will be given at the next symposium of the German Terminology Day, which will take place from March 2-4, 2023. Sister Carola Maria will present her work there and will also submit, in advance, a contribution for the conference proceedings. Beyond that, she hopes that her dream of a terminology databank for the Schoenstatt Movement will soon take shape and form and that it will be used by many. Thus the databank can make a contribution to the message of Father Joseph Kentenich, the founder of the Movement, being authentically received, understood, and transmitted in various languages and cultures. 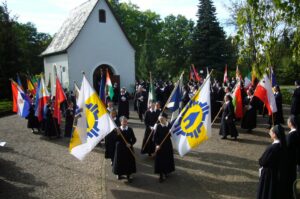