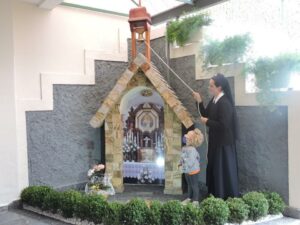 With joy, on June 20, 2022, during the golden jubilee year of the Schoenstatt Shrine of the Perpetual Presence of the Father, we dedicated a wayside shrine in our Ray of the Sun Kindergarten. It is located in the neighborhood of Caetetetuba in the city of Atibaia, São Paulo, Brazil.

Educators and students spiritually “built” the wayside shrine during the month of May. Each class,  including children and educators, had a resolution and when they fulfilled it, they painted or glued a heart or flower onto a picture of the shrine. On May 9, the beginning of the silver jubilee of the kindergarten, with children, educators, Schoenstatt Sisters of Mary, and a representative of the city‘s Office of Education participating, the cornerstone for the wayside shrine was blessed. The roofed inner courtyard, where the parents pick up their children after school, was the place chosen for the Mother of God. On the floor was a time capsule with the signatures of all authorities present and a sign handpainted by the children documenting their participation in this event.

After the laying of the cornerstone, the area was covered and cordoned off with a rope on which the children’s schoolwork was hung. The educators and children had often sung a song in which they invited the Mother of God to come and dwell in this place. Thus we could observe the spiritual conquest of our wayside shrine: The walls were raised, the roof completed, the floor laid, and, also, the beautiful bell tower with the bell and rope arrived. Lastly, an MTA poster was attached to the altar of the shrine, covering the entire interior.

The goal of this wayside shrine is for our children, families and staff to have a stronger attachment to the shrine and be educated “in its shadow” in Schoenstatt pedagogy. 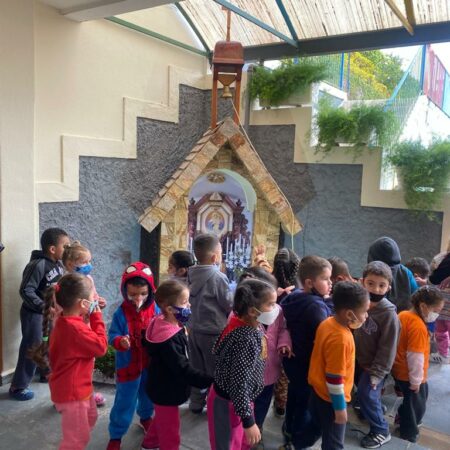 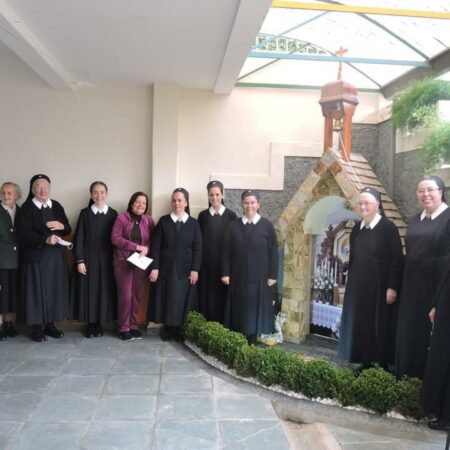 On the day of the dedication, in addition to the children and educators, Schoenstatt Sisters of Mary were present. Among them were Sister M. Silvia Regina Formagio, provincial superior, Sister M. Givanilda Oliveira, member of the province council, representatives from the Office of Education in the municipality of Atibaia, benefactors, Mr. Reginaldo Aparecido Lime, who was responsible for the construction of the wayside shrine, and Father Rafael Carmo de Azevedo, who blessed it.

After a brief introduction telling about the construction of the wayside shrine, class representatives, together with their respective educators, placed their contribution for the spiritual construction of the shrine into the jug for the capital of grace in the Schoenstatt shrine.

Fianlly the time had arrived to see the reality of the long- anticipated wayside shrine! At the sound of the bell, some children and sisters removed the cloth that covered it. Then everyone could see the new place that we had prepared for the Mother of God. Sister M. Silvia Regina and the three-year-old student Lívia Botelho Santos da Silva, unveiled the shrine-shaped door of this wayside shrine. Amidst cheers, applause and the sound of the bell, we could see the throne of our Mother Thrice Admirable, Queen and Victress of Schoenstatt in our Ray of the Sun Kindergarten.

To conclude this solemn moment, Father Rafael said a prayer and blessed the wayside shrine with holy water.

– On June 20, some of the children, accompanied by the coordinator of education, went to the site early in the morning to rehearse the unveiling of the curtain that covers the wayside shrine. When we asked the children what was going to happen, they replied that the Blessed Mother had a surprise for us.

–  After the dedication, I asked the three-year-old student Laura Gomes Sartorto Careiro if she enjoyed the celebration. She answered in the affirmative and said that she liked the little house of the Mother of Heaven very much.

–  On the last day of school before winter vacation began, some children went to the wayside shrine to say good-bye to the Mother of God. This caught the attention of their parents who likewise went there and made the sign of the cross.

–  It is beautiful to see how the Mother of God is effective from her wayside shrine in the lives of the children and their families.