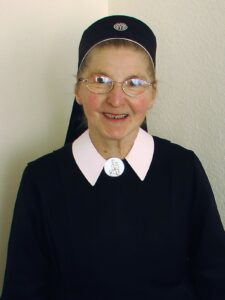 with the Heart of Gold

One Saturday evening in the children’s home in Freudenburg, one of the girls noticed a small blemish on Sister M. Edgardis and immediately trumpeted it. How was the other sister present to react? Spontaneously she told the children: “But she has a heart of gold!” Ever since then, Sister M. Edgardis was the sister with a heart of gold, and she did justice to this name. The pastor of her home parish sensed this already before she joined our community. He wrote: “If Kaethe’s physical size leaves something to be desired, she possesses qualities of the heart that far supersede that.” Her co-sisters and everyone who met her in the following 64 years of her life as a Schoenstatt Sister of Mary experienced this in many ways.

In 1953, she was accepted into our community in Schoenstatt, Germany. From the beginning, she fulfilled tasks where she was needed, with cheerful energy and sacrificial joy, and with faithfulness in small things, whether it was in the garden or cleaning, in the dining room of the sisters, or, above all, for many years as the sacristan of the shrine in Koblenz-Metternich, Germany. She knew how to place her often inconspicuous activities within the framework of Schoenstatt’s great mission for the Church and to make them fruitful. Her co-sisters liked to work with her. Sister M. Edgardis had a fine sense of feeling with which she perceived exactly when something was missing and where she could help. Her warmth and  kindness did everyone who met her good.

Characteristics of her golden heart

Above all it was a warm heart. One felt comfortable with her. People sought her out. In a report about the time she worked in Freudenburg, it reads:

“We also had a small MTA chapel in the forest of Freudenburg in the Herrenwald. In May and October, Sister M. Edgardis always conducted an evening pilgrimage there with women. The women liked to participate because she often had time to talk afterwards. She was very much appreciated in the village and in the parish, especially because of her joyful, genuinely human manner, and her open ear for the concerns of the people.” 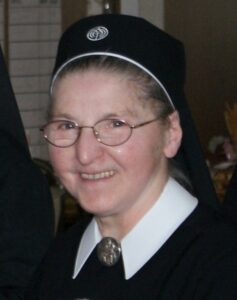 In this statement two more characteristics of her golden heart are illumined: She had a happy and and open heart. Whoever met Sister M. Edgardis, usually looked into a happy, radiant face. One sensed that she was a thoroughly positive person, even when many hard things had to be borne. Her friendly disposition didn’t just happen. Again and again she suffered under difficult circumstances. In the final months of her life she had much pain, but one never heard a word of complaint from her.  She did the work, which was often strenuous because she was short in height, with pleasure and love. Thus many admired her because she never spoke negatively about others or about circumstances.

Taking the other person as important

Sister M. Edgardis did not take herself important, but rather took the other person as important. With her people-person personality she quickly entered into converstation with others. She approached them, inquired how they were doing, had an attentive and sincere interest in what they told her. Above all, her task as sacristan of the shrine brought her into contact with many people; for example, a woman from India who came to the shrine to pray. The woman worried greatly about her daughter and often told Sister M. Edgardis about her. 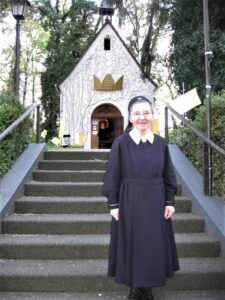 Sister Edgardis listened to the people, cared, and promised to pray for them. Many sensed that these were not empty words. Often she was seen quietly praying at length in the shrine. At these times one had the impression that she really was completely with God and the Mother of God. In a pleasing way, Sister M. Edgardis was deeply devout, thoroughly religious. It was simply understood and natural for her to live out of faith and to form her daily life accordingly. In a good sense, she possessed a pious heart, that shaped her whole being and radiated from her.

When we look back on the life of Sister M. Edgardis, we don’t find any outwardly splendid, great deeds. She was not a great speaker and never stood in the foreground. And yet, her simple and humble life as a Schoenstatt Sister of Mary has left its mark on people in a special way through the radiance of her “golden heart.”

The radiance of her “golden heart”

So it is that people still today ask about the little sister who was there when their child was baptized in the shrine, or about the sister who prayed for them. Many spontaneously tell what they experienced with her.

A young couple that was married in the shrine remains united with her beyond her death. They come with their children to the grave of Sister M. Edgardis, bringing flowers, and they entrust their family cares to her. Her co-sisters also say that they liked being in the same house as she.