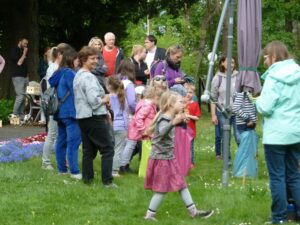 … in Honor of the

Originally the idea was to combine a “Kids for Kids” program with the May opening at the Schoenstatt Center in Metternich, Germany. Kids for Kids, that is, children playing games could win prizes which they would donate to children from Ukraine. Late in the afternoon, then, the May opening, which has become a tradition, would take place with Holy Mass outdoors and a closing procession following that.

The idea was developed further when it became clear that the Schoenstatt Sisters of Mary wanted to accept refugees into the St. Joseph House on their property. It was soon clear that the planned program would be a nice opportunity to meet Ukrainian refugees. In the neighborhood and in the city of Koblenz (near Metternich) there are numerous Ukrainians who are registered to receive shelter. Mrs. Ulrike Mohrs, the mayor of Koblenz, and her competent helper, Mr. Pelikan, are committed to help these people. Sponsored by the “Tafel Koblenz,” by private individuals, and the Sunshine Club of the Luthern Kindergarten in Immendorf, Germany, games, stuffed animals, and many children’s books were donated and ready for May 1, 2022. Thanks to the help of a Ukrainian teacher and a translator, an invitation in the German and Ukrainian languages was quickly prepared and could be distributed. She and another translater undertook the task of mediation at the celebration.

At 3:00 pm the program began with the first Ukrainian woman and her children arriving a half hour earlier. Little by little more and more people came, also German famlies, who first of all participated in the rally in the park of the Schoenstatt Sisters of Mary. The games were organized by the youth ministers of St. Johns Parish in Metternich. Sack races, egg races, and stop-dancing were on the program and brought fun and joy to adults as well as children.The meal-table for the smallest visitors was visited frequently.  There was a big rush when it came to choosing games. We were happily astonished by the many participants this afternoon. 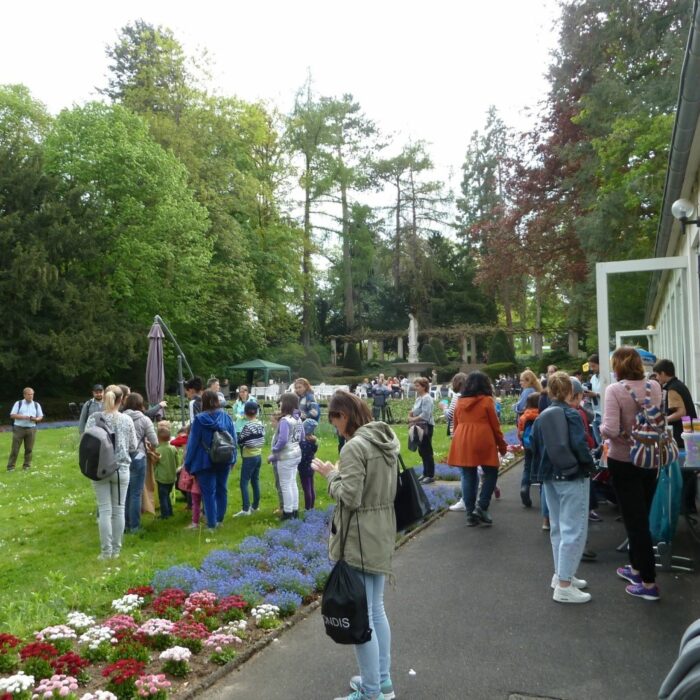 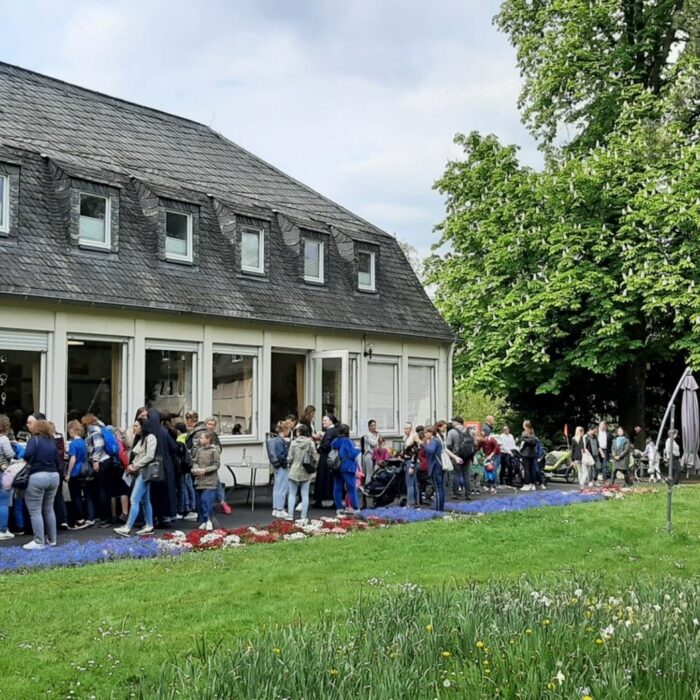 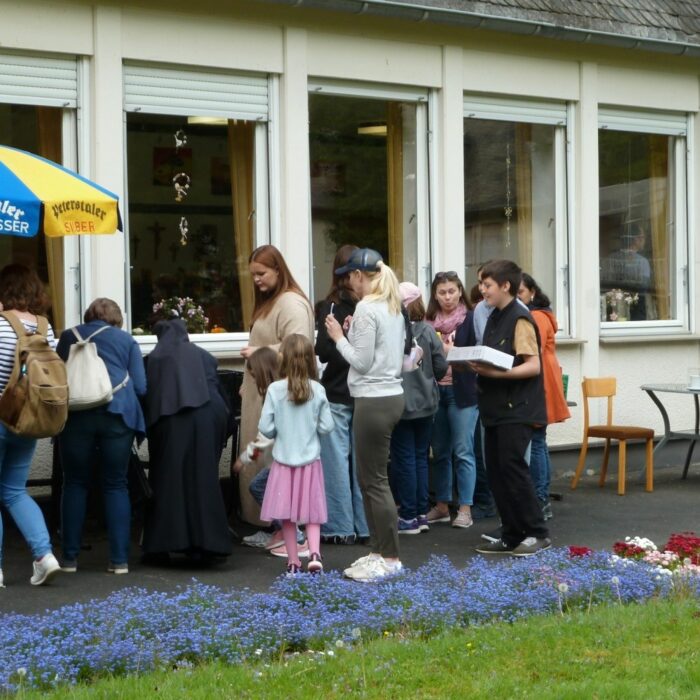 Before  the outdoor Mass which began at 5:00 pm, Ulrike Mohrs welcomed everyone warmly. She expressed how happy she was to greet the Ukrainian refugees. The participants at the Holy Mass sat around the Immaculata-fountain in the park. The Holy Mass was that of Mary, Queen of Peace. The Mass text and the prayers were partly in the Ukrainian language, a special joy for our Ukrainian guests. The celebration began with homage to the Blessed Mother. She shone in her importance for us humans: as Queen of Peace, Protectress, Mother, Exemplar for Women, Trusting, Believing … Signs were put around the Immaculata-fountain with the respective titles in two languages.

In his homily Rev. Bühler developed the thought: Mary, Queen of Peace, and the importance of the Blessed Mother for us. Among other things he said:

In an encounter with her we experience more deeply

In an encounter with the Blessed Virgin Mary we experience that God’s love and God’s peace is in us, that we are carried by it and led by it.
Rev. Bühler concluded the service in the Ukrainian language. 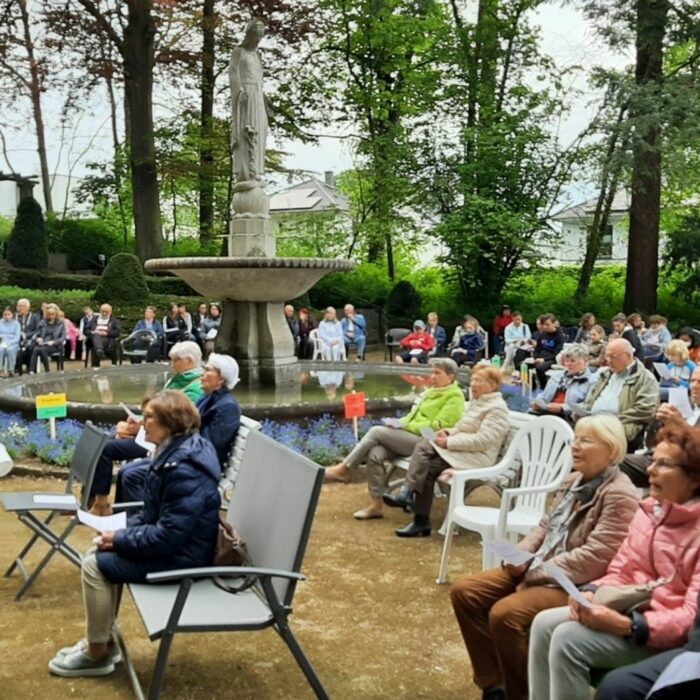 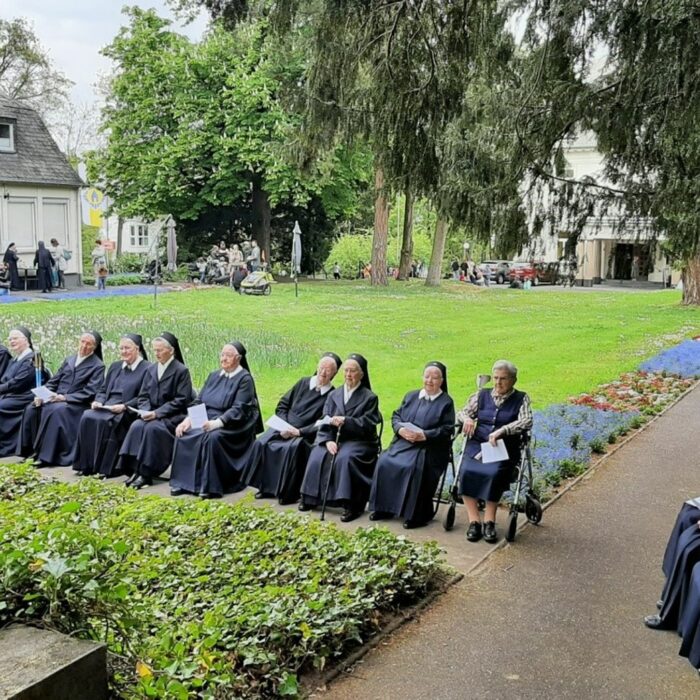 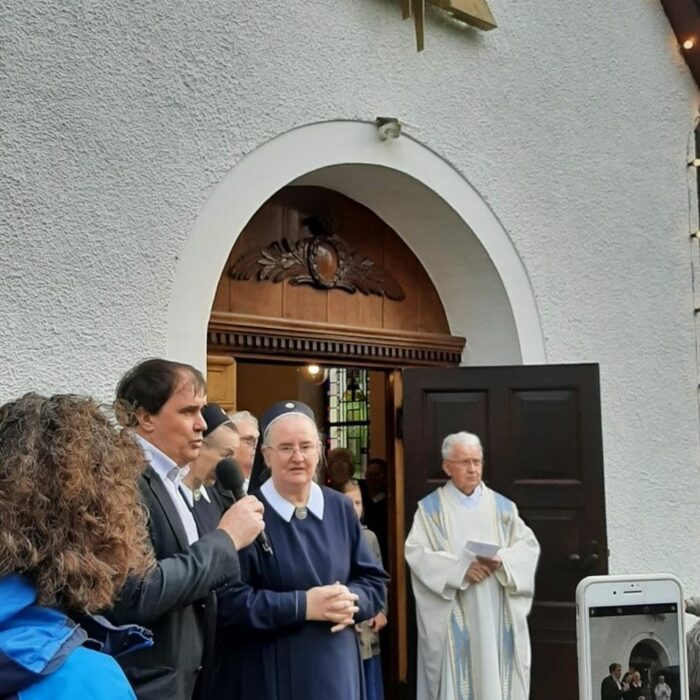 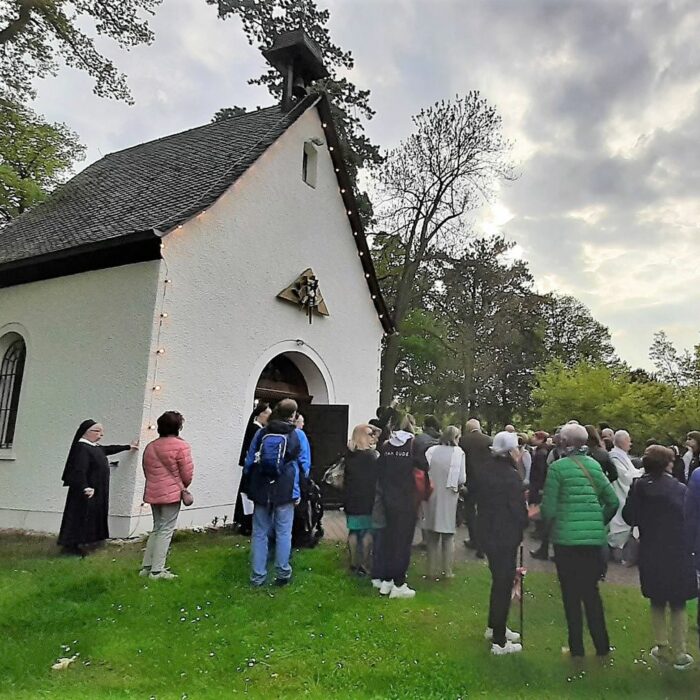 Then we went in procession to the shrine—with the prayer:

“Blessed Mother, intercede with God that the war in Ukraine and wars the world over end. Your Son came into the world to bring us peace. You invite us wherever we are to work for peace in small ways according to our possibilities. “

In conclusion, two Ukrainian women thanked us for the friendly reception and for everything that had been given them today. They had entered their words into their Smartphones which then were translated into German.

Looking back we have to say that it has been a very long time since the Emilie Park has seen so much life as on this afternoon. It is impossible to say exactly how many people were there. There were many children, many women with little children, families. Were there 200, 300 people–or more? We thank the Blessed Mother that the weather cooperated. In the evening we Schoenstatt Sisters of Mary who had helped along could say: We are exhausted, but happy.