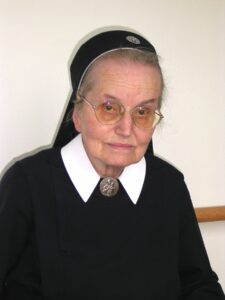 “Finally the great day has arrived!

Healthwise she is frail, but it is amazing what all she still can do for herself, above all, with her Rollator. She still maintains some valuable independence with it! When a person knows that at about the age of six she had polio, it is actually astonishing! If, at that  time, her mother had not taken her immediately to a doctor who operated on her foot and kept her ambulant, she would have needed a wheel chair even as a child. She once told me about a sick child her age who was brought to the doctor too late and whose mother cried bitterly because the child could not be helped anymore.”

A new home in Bamberg

Sister M. Elinor Grimm, a co-sister of Sister M. Christhild writes: 100 years old – a long life. Sister M. Christhild Feiereis was born on April 7, 2022 in Glogau, Niederschlesien, in the Diocese of Breslau and was baptized with the name Valeria on April 16.  Her brother who is three years younger than she, Hubertus Feiereis, was a reputable physician in Leipzig. Her brother who was nine years younger than she, Konrad, was a priest, theologian, and professor of philosophy in Erfurt. Beginning in April 1928, Sister M. Christihild attended the Catholic grade school and after six years, the city high school for girls.

For a good two years after completing her nurse training, she worked as an infant and pediatric nurse at the Children’s Hospital in Leipzig. After the transfer of the welfare of infants to the NSV (National Socialist People’s Welfare Organization), she was engaged in welfare work in infant and maternity homes as well as in clerical service. In 1945, due to the turmoil of war, her family was forced to flee, and after locating in various places found a new home in Bamberg. There, for three years she managed the household of her father and the rural household of the innkeepers who accomodated them.

If you want me to become a Sister of Mary …

During her youth Sister M. Chrithild participated in a day of recollection given by Father Hagel SAC. He gave her a little book to read about a Sister of Mary who had died. Thus the longing grew in her to one day become acquainted with the Sisters of Mary. The opportunity presented itself quite spontaneously one day when she was shopping in Bamberg. It was clear to her that she had to be a Sister of Mary. After this encounter she told the dear Lord: “If you want me to become a Sister of Mary, let me meet this sister again, then I will ask her how it can be done.”
And so it happened. 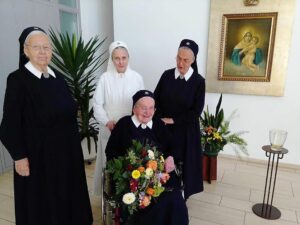 On April 7, 1948 Sister M. Christhild joined our community in Oberndorf, in the Diocese of Rottenburg-Stuttgart and thus began the eight year program of formation. Already in 1949, after novitiate, she returned to the city hospital in Oberndorf and worked there again as a nurse. When our community began in Rottweil in 1953, she was transferred to the district hospital where she worked as a surgical nurse. With enthusiasm, commitment and a talent for organization she carried out this very responsible task for 30 years. It is even more astonishing when one knows  about the disability of her legs due to the polio she had as a child because one must stand at length in the operating room.

Sister M. Christhild served as superior in our community in Ulm and Rottweil. In September 1993, her life’s journey led her to Nesselwang. A home for the sisters and a shrine had been built there, and in 1995 she was appointed the first superior there where she remained until 1997 when she was 75 years old. Year after year, as long as she could, Sister M. Christhild continued to contribute to the house community.

All depends on God’s blessing

“Sister M. Christhild is still interested in the news every day and receives reports from the newspaper. Through the shocking news about Ukraine, memories of her own traumatic experiences are awakened.  For example, the fact that her brother who was a physician met Friedrich Curtius, then a naval doctor and later chief physician at the Lübeck psychosomatic clinic, on a hospital ship during World War II. They survived over six hours in ice cold water. Dr. Curtius promised him that if they survived, he would bring her brother to his clinic in Luebeck.

What must that be like now and what will it be like later for the many refugees from war zones? How much trauma is re-awakend! How much suffering! Nevertheless, we are grateful today and celebrate. 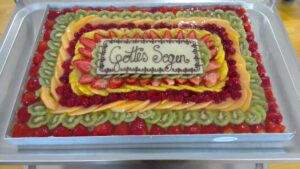 What must that be like now and what will it be like later for the many refugees from war zones? How much trauma is re-awakend! How much suffering! Nevertheless, we are grateful today and celebrate.

Early on April 7, 2022, we began the one hundreth birthday celebration with a holy Mass of thanksgiving. Acquaintances sent a beautiful bouquet of flowers and a fruit cake with the inscription ‘Many blessings.’ That says it all. It is nice that Sister M. Christhild can rejoice from the heart, also about well-wishes, a funny greeting, a flower bouquet. She can often answer very accurately and her face beams. She never forgets to say thank you and she prays a lot. May God grant her continued blessings!”