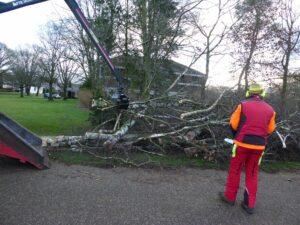 Everyone who has ever visited Schoenstatt-Au in Borken, Germany knows of the venerable avenue of beautiful birch trees that for fifty years lined the street to the province house of the Schoenstatt Sisters of Mary and which brought the guests of the Schoenstatt Center into the special atmosphere of this place.

Unfortunately, these old trees were no longer firmly rooted and they had to be felled because there was considerable risk they would break and fall. And so, what began in sadness was transformed, through a special initiative, into the hope-generating planting of 91 new summer linden trees.

The city of Borken proposed the idea to the Schoenstatt Sisters of Mary of an avenue of children‘s trees where the former avenue of birch trees stood. In the city of Borken there already are areas where parents or family groups have sponsored a group of trees. A plate with the name and birthday of a child is placed next to a tree for which a financial contribution is made. So, in this way the children‘s-trees were planted on the road to Schoenstatt-Au.

Through the street department of the city of Borken, our garden was prepared with painstaking efforts and in the best way possible for the new avenue of trees. After the birch trees were felled, the root systems were removed with large equipment. Then, over some days the soil was prepared for the new planting. 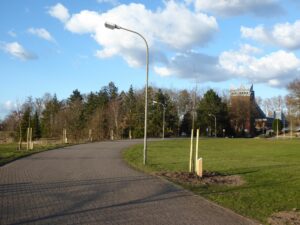 The finishing touches were made when the best topsoil was spread and supporting posts were pounded into the ground (expertly executed). Last but not least followed the plates with the name of the person sponsoring the tree–thus attracting the first curious onlookers who passed by the undertaking.

Planting on the Feast of St. Joseph

We Schoenstatt Sisters of Mary were especially happy that the Feast of St. Joseph was chosen for the planting of the children’s trees. We experienced March 19, 2022 — a day of bright sunshine and most beautiful spring weather— as a unique feast on the property before our house.

About 500 people congregated at Schoenstatt-Au where the 91 summer-linden trees where waitiing to be planted into the fine top-soil.

With strollers, baby carriages, and bicycle trailers, each family brought their tools. Young and old arrived ready to work with large and small spades and other garden tools.  Whether it was grandpas and grandmas, moms and dads, aunts and uncles, and babies who were peacefully sleeping in strollers, or children already crawling on the ground to help along; whether it was school-age children or teenages who took the spade into their hands, at 11:00 am the planting began – together! 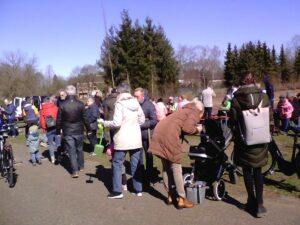 Joy abounded and there was beautiful comradery. The sponsors of the trees visited each other and made contacts. Many were grateful that we Schoenstatt Sisters of Mary made our property available for this action. They said that they will use this street when they go for a walk and will always pass by their own tree. People from the neighborhood and people from downtown, many, cherish the Schoenstatt-Au and also visist the Schoenstatt shrine regularly. 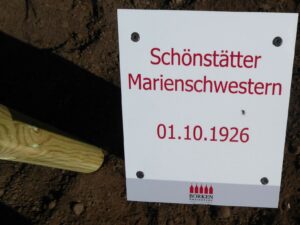 The oldest child was also present at the tree planting

The Schoenstatt Sisters of Mary were “born” on October 1, 1926 and are very happy that shortly before the 100th birthday of their community they themselves could likewise plant a tree. Our provincial superior, Sister Marisa Spickers, took a spade and made sure that our community could immortalize itself in the Avenue of Children’s Trees because, after all, we are all “children of God.”

Surely, St. Joseph and our founder Father Joseph Kentenich, who both were well-versed in gardening, enjoyed this Feast of St. Joseph in a special way. 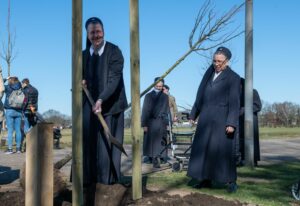 We Schoenstatt Sisters of Mary are happy and grateful about this event that is an enduring contribution to the preservation of God’s creation also for us.

Individual children’s trees were decorated with homemade peace-doves and signs of peace, because the planting is also meant to be a sign of hope and peace. Precisely now is the best time—as Martin Luther King Jr. expressed it in the 1960s: “If I knew the world was going to end tomorrow, I’d plant a tree today!”

We did so, as children of God, trusting with great hope and confidence in a bright future.