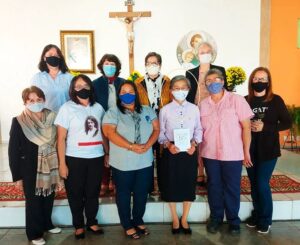 Since its foundation, our institute and other Schoenstatt Secular Institutes have been members and collaborators of the National Conference of Secular Institutes of Brazil. Sister Maria Dorotéia Beggiato is seen on this historic photo. Over the course of the years, members of the Schoenstatt Fathers, the Brothers of Mary of Schoenstatt, and the Ladies of Schoenstatt have actively collaborated and were asked to be on regional or national councils. Sister M. Adjutrix Feldman was involved in drafting the first statutes of the conference that were approved in 1987.

For 12 years, since 2009, I have been part of this history. We were like leaven when we worked together with the charisms of other institutes. In addition to my function as treasurer, I could work directly in drafting the new statutes that were first accepted ad expeimentum and then definitevely by the Congregation in Rome. I was also the coordinator of the Vocation Ministry Team and Consecrated Secular Youth. During the past 12 years the conference has developed into a vital and active presence in the Church and has increasingly won the openness and support of church authorities.

Next year Brazil will host the XIII Congress for Secular Institutes of Latin America. The newly elected council of this year wished that I continue working within the Central Commission.

The secular vocation to consecrated life, a great gift for the Church

“the Holy Spirit so that he may renew in each member of secular institutes the creative and prophetic power that made them such a great gift to the Church before and after the Second Vatican Council …. I therefore invite you to deepen the meaning and the way of your presence in the world and to renew in your consecration the beauty and the desire to participate in the transfiguration of reality …”[2]

Father João Cândido da Silva, an advisor to the National Conference of the Bishops of Brazil said, “This jubilee of the CNISB is an opportune moment for each secular institue to renew the grace of vocation and mission and an opportune moment to promote communion among all.”

Now is the time – Immaculata today!

The words of the pope are an invitation:

“Consecrated secularity is a prophetic sign that urges us to reveal the Father’s love with our lives rather than with words, to show it daily on the roads of the world … Be a leaven of truth, goodness and beauty, fermenting communion with the brothers and sisters around you, because only through fraternity can the virus of individualism be defeated … You are consecrated for the world, which awaits your witness to a freedom that gives joy, that nourishes hope, that prepares the future.”[3] 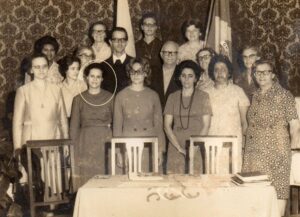 This photo was taken on July 9, 1971,[1] on the occasion of the founding of the National Conference of Secular Institutes. Father Gilberto Cavani of the Secular Institute of the Schoenstatt Fathers and Sister M. Dorotéia Begiatto of the Secular Institute of the Schoenstatt Sisters of Mary were present. Both belonged, like the others, to the first council that was established at the founding.  Father Gilberto Cavani und Sister Dorotéia participted in the founding of the conference. According to historical accounts by Sr. M. Adjutrix, then director of nursing at the São Paulo Public Hospital, they helped draft the conference’s first constitution.