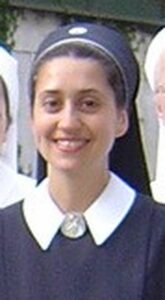 was a cheerful, simple and enthusiastic girl, who above all, let herself be conquered by God and his invitation to a life consecrated to his Kingdom. She was born in Tucumán, Argentina, on June 5th 1976; she was the second daughter of a religious and hard-working family.

I met her when she was very young, member of the Girls’ Youth of Tucumán, when she was attending the first years of her medicine studies.  At that time in that diocese, the Shrine of the Mother, Queen and Victress Thrice Admirable of Schoenstatt was being conquered, both spiritually and materially; it was a time of foundation, and therefore a time of special graces for those who opened the heart to Mary´s mission in the Shrine.  Valeria, this was her Christian name, followed with young courage and enthusiasm Mary´s invitation to live in Covenant with her, and on December 10th 1998 among the walls of the Shrine under construction, she sealed her Covenant together with other girls of the Schoenstatt Girls’ Youth. It was not just another event in her life, since she started a way of self-education, helpful dedication and inner transformation which conquered her completely.

She loved life, friends, her career, she thought she was in love with a boy and dreamed of being a mother; she lived all this with great intensity. But slowly another world, which she did not know until that moment, started to capture her interest and to show her another possible horizon. A crucial point on this way, which she discovers through the Covenant of Love, was the discovery of her personal ideal, this means, the formulation of a phrase in which is expressed the mission of life given by God and which is assumed freely as a gift for others. During a personal retreat which Valeria carries out in her family property, she comes to this formulation with great joy and mission consciousness:

I want to walk through life, strong and worthy, simple and kind,

giving out love, peace and joy.

She takes this phrase from one of Father Kentenich’s prayers, Founder of Schoenstatt’s Work, and it refers to Mary. In this way she wants to be an image of Mary with her personal originality.

More and more she leads her numerous talents to serve others, and in different apostolates she finds the joy and satisfaction that the activities and priorities of the girls of her age do not give her. The Shrine under construction is the central place in her life, she frequently prays there, and asks Mary to guide her life, since she does not find more enthusiasm in her studies of medicine. May listens to her petition and after a time of discernment, Valeria decides to consecrate herself to God and to his Kingdom in the Secular Institute of the Sisters of Mary of Schoenstatt.

In June 2000 Valeria entered the Institute as postulant in Florencio Varela, Buenos Aires. Thus she started a way to become herself a child, spiritually in the evangelic sense, led by the spiritual teachings of the Founder, whom she learnt to value and follow as a spiritual daughter in the Schoenstatt Youth. From him she learnt to live the life as a “game of love” with the living God, who acts permanently in our life, and to respond to him with the filial faith and courage of a woman decided to carry out his plan with generosity like Mary.

Shortly after the novitiate Sister M. Margarita – she chose this name because a smile appears on the face when it is pronounced – started her nursing studies and afterwards the master´s degree. In her career she found a wonderful channel for her desire of service and dedication, and with her friendliness, spark of life and simplicity, she was able to become an attractive reflection of Mary for many people. 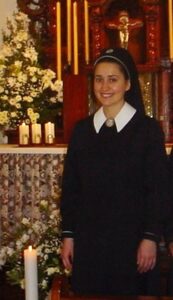 In 2007, in a totally surprising way, she was diagnosed an acute lymphoblastic leukaemia. At the same time as her physical strength was diminishing, her spirit was being transformed. Her smile, her faith, her attention for others, her strength to support and comfort those who were moved by her situation, gave a strong and unforgettable testimony.

Just a few days passed between the diagnosis of her illness and her death, along this time she showed how God’s strength had broken into her weakness and had completed the miracle of her inner transformation in a true image of Mary, bearer of Christ to the men and women of her time.

On December 18th 2007, in the evening, Sister Margarita gave her young life to the heavenly Father, surrounded by her course Sisters who prayed the prayer, with which they together had crowned Mary as the Queen of the authentic filial feeling; this was also the crowning of her life.

(There is a book Margarita (spanish), from Editorial Schoenstatt-Nazaret and a Link to get it).