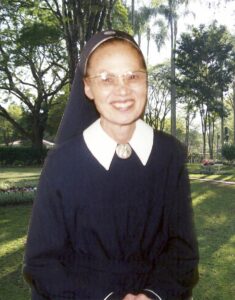 “Holiness is the most attractive face of the Church,”

writes Pope Francis[1]. He draws attention to the fact that many saints who have not been canonized nevertheless encourage and accompany us through the witness of their lives.

It is with joy that we present one of these “attractive faces” of our sisters’ family here. Her presence among us radiated the essence of Mary:

It has been 28 years since God called her to eternity in 1993, but the power of her witness still touches us today. Born to Japanese parents on December 13, 1928, in Taquaritinga, São Paulo State, Brazil, she was raised in the Buddhist culture. Divine Providence arranged it and directed her to a Catholic school in Curitiba, Paraná State, where she converted to the Catholic faith and received the sacraments at the age of 17. To help her realize her life’s mission, God led her family to Londrina, Paraná State, in 1948, where young Lucy taught as a teacher in our school “Mãe de Deus” after completing her studies. She soon identified with Schoenstatt’s spirituality. And with the desire to become a living image of Mary, she entered our institute.

Lucy was very open to everything religious and found a deep home in the heart of the Blessed Mother, the Queen in the Shrine; in Schoenstatt’s spirituality; in the person of the founder; and in the sisters’ family.

Many who knew her testify that they found a home in the living shrine of her heart. A sister who lived near her for many years testifies, “She always had time to devote to other people who came to her with many problems. The people were always very grateful and said, ‘She was sent by God.’”

She Led to the Shrine

Sr. M. Lucy joyfully offered her talents for the realization of the charism of our founder in various tasks. She was always active in the field of education and pastoral care for the Japanese living in Brazil. Mitty and Luiz Shiroma of the Family League in Londrina testify, “When we were getting married, Sr. M. Lucy helped us with the preparations for the erection of the home shrine with the picture of the Blessed Mother in our future home. When we got married, the Blessed Mother was already there waiting for us with her Son. It was a great blessing for us! From then on, she invited us to the celebrations on the 18th of each month or to an important event in the shrine. In August 1991, we joined the Family League and began our journey in the Schoenstatt Family. Eternal gratitude to our ‘spiritual godmother’ who now intercedes for us from heaven with the Blessed Mother.”

Her apostolic activity was fruitful because she taught what she lived, as one sister described it: “I remember seeing her in the shrine before the Blessed Sacrament, totally immersed in the divine. She was an extremely prayerful sister ready to serve.” She took Schoenstatt’s spirituality seriously and practiced it until her last days. A person who accompanied her relates, “One night, with much effort and support, she managed to sit up in her bed, and in a weak voice she asked me to give her her spiritual daily order to mark it for the day. She was always faithful, even in the little things!”

In addition to pastoral work, Sr. M. Lucy was active in art education, both at school and in our community. “She was always helping someone or doing something,” says one of her fellow sisters.

“Seeing and acting with mercy: that is holiness.” [2]

These words of Pope Francis immediately bring to mind Sr. M. Lucy’s discreet and sacrificial devotion to her family. After her father was quickly and unexpectedly called by God into eternity, she cared daily for her elderly mother and her two paraplegic brothers for years. This meant that she often had to be absent from the house community to which she belonged. But she organized herself in such a way that her absence did not disturb the daily activities of the sisters.

“We see revealed the very heart of Christ.” [3]

These words, with which Pope Francis time and again describes those who live a holy life, can be applied to Sr. M. Lucy, especially during her illness – pancreatic cancer. This illness led to her death and caused her much pain. “Every pain is a sacramental,” she used to say, repeating and living the words of our founder.

When Sr. M. Lucy heard that a young woman was making her vocational decision, she prayed for her and offered up for her the many pains of her illness and the many injections she had to receive. She once told the nurse who was accompanying a young girl, “Each injection is to conquer one vocation. There are already 64!”

Her nurse recalled, “I often accompanied her to doctors’ appointments. Sometimes you could see how heavy-hearted and weak she was, and certainly she was in a lot of pain. But I never heard her complain. She was always very grateful and sincere. She attributed everything to God’s benevolence and offered up everything for the capital of grace.”  Sr. M. Lucy “lived calmly in the face of the great crosses that beset her; she surrendered herself completely to the will of the Father,” confirms another sister.

Even the doctor who accompanied her did not fail to notice how great her soul was. In the last days of her life, he said, “I know she never says she’s tired … She gives herself completely to others without thinking of herself. She’s always happy, even when she’s feeling terrible. I tell her that she has to take it easy. She looks at me and just smiles. She is a saint!”

“The saints … are the most authoritative witnesses of Christian hope.” [4]

When we think of Sr. M. Lucy, the image of Mary during her visit to Elizabeth always comes to mind. There she serves, totally united to Christ, her heart overflowing with joy in God. “She had a bright smile or a cheerful face. I always had the conviction that I experienced and lived with a holy Sister of Mary,” concludes the sister who almost always lived with Sr. M. Lucy.

For this reason, we cannot keep this treasure only for ourselves. With great joy.