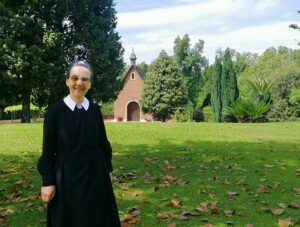 “Enrich the life of the Church with your charism!”

This request of Pope John Paul to our Institute prompted our Brazilian province, the Schoenstatt Tabor Province with its headquarters in Atibaia, SP, to send a sister in the 1990s to Italy to bring the charism of Schoenstatt there, to enrich the life of Church in that country and to collaborate in its mission. It was also an opportunity to return the roots of our faith brought to our country by the Italian immigrants.

Upon her return to Brazil after 22 years in Italy, Sister M. Ivone Zenovello tells us in this interview about her missionay experiences:

These 22 years that I lived in Italy enriched me greatly. When I arrived in Italy Schoenstatt as a Movement was not here. However, this was not a disappointment for me but rather a direct call to put all of my strength into the service of a great mission. I learned that for God to act and carry out his plans it requires total surrender, commiting ourselves as small but completely willing instruments. I always prayed to John Luiz Pozzobon to accompany me and to help me. I believe he allowed me to experience what it means to be like the Blessed Mother and to bring Jesus to many people. 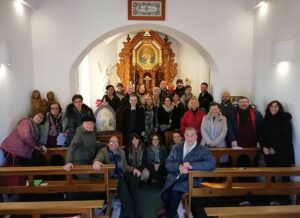 Into how many cities have you brought the charism of Schoenstatt through the Apostolate of the Pilgrim MTA?

It is impossible to count the cities because it is so many. But I am certain that the Pilgrim MTA is present in fourteen regions of Italy and in this way the charism of Schoenstatt is also known.

What was your greatest challenge during these year?

And what is your greatest joy?

My greatest joy always was not only to pilgrimage with the Mother of God to all the families, but also to witness how the people discovered the meaning of their life and experienced the faith through the spirituality of Schoenstatt. Many sealed the covenant of love and established a home shrine.

You had the opportunity to live in proximity to three popes. Was it possible to see them often in person?

During these years in Italy I lived in proximity to three popes. On December 29, 2000, I had the privilege of a very special encounter with John Paul II in our Cor Ecclesiae Shrine in Rome. I knelt down before him and greeted him; he blessed me and gave me a Rosary that I still carry with me at all times as a preciousl gift. Now I can say: I knelt before a saint!

I could meet Pope Benedict XVI several times, always at St. Peter’s Bascilica, and once I could receive Holy Communion from his hands. 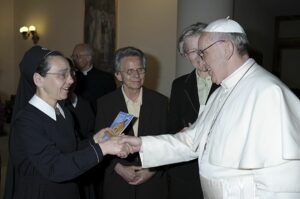 I could participate in a Holy Mass of Pope Francis in the Chapel of Casa St. Marta right at the beginning of his pontificate. We sisters of the Cor Ecclesiae House had a meeting with him. On that occasion I gave him a small image of the Pilgrim MTA and the book which is part of the apostolate; I told him that I work in the Apostolate of the Pilgrim MTA and I requested his blessing for all of the families who receive the image in their homes. He lovingly  accepted the little picture, looked at me, and blessed it.

Of course, during the years with these three popes I participated in various Holy Masses and many liturgical celebrations in the bascilicas in Rome. Sometimes in privileged places, sometimes in the midst of a crowd of people. I participated in the audience for the jubilee “100 Years of Schoenstatt,” and I organized the participation of more than 700 Italians who came from every region of Italy.

What is the greatest gift that these years in Italy have brought you?

It’s very hard to say what the greatest gift was that these years brought me because everything was a great and unique gift. For example, that I could dedicate this period of my life to the service of the Schoenstatt mission. I felt very rewarded, at my farewells from Italy when everyone expressed their gratitude in manifold ways for what I had done; and I confess that I really was not aware of all that I had accomplished. So many priests wrote to me and thanked me for my courage and for the conviction with which I faced different circumstances. A Schoenstatt Diocesan priest wrote to me: You were a “Marian apparition” among us.

It is indeed a great gift after 22 years to already see so many fruits from the seeds that God sowed through me. 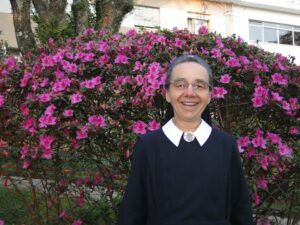 How did you feel leaving this “Schoenstatt Mission Land” after 22 years?

I have so many emotions. Perhaps I can condense them into four:

Gratitude for faithfulness in the midst of so many challenges. Of my 44 years as a Sister of Mary, I lived 22 of them in Brazil and 22 in Italy;

Joy that I have returned to my home and can continue the mission here that the Father entrusted to me;

Sadness that I had to leave my second home—Italy–right in the midst of the pandemic;

Readiness to continue dedicating my strength and courage to the mission.  And should I one day return to Italy, it would also be a great joy for me!

Presently, having been back in Brazil for only a short time, I am trying to offer these four emotions and others, all together, to Father and to freely say: Father, I go with you!

What do you expect for the coming years in Brazil?

I hope that I can continue pulling the “Triumphial Chariot of the MTA” to where God awaits me with his graces. May Father give me the strength always to fight with perserverence and never to become discouraged in the face of difficulties.