was born in Cape Town on 28 December 1932, in the shadow of the famous South African landmark Table Mountain. As a young girl, she joined the Girl Guide Movement which helped to shape her love of nature and outdoor activities.

After completing her schooling, Sr Mary worked for the national Catholic Newspaper and later for the Catholic Bookshop. She was highly praised for her business and administrative competence, as well as her marketing skills.

As a teenager, Sr Mary had the privilege of attending a talk given by our founder, Fr Kentenich, during his visit to South Africa in 1948. One sentence touched her deeply:

‘I came out of Dachau just as you see me now.’

She wrote: “Since I had seen a film on concentration camps, these words made a deep impression on me and I’ve never forgotten them. The privilege of this meeting, which took place a long time ago, remains an unforgettable experience.”  Her encounter with the founder made a deep and lasting impression on her and influenced her decision to join the Schoenstatt Sisters of Mary in January 1955.

Sr Mary was, by nature, a people’s person, and her passion was the apostolate. In the early ‘60s, she enthusiastically took up the young life in the Schoenstatt Movement and helped to establish and structure the various Branches of the Movement in South Africa. She cared for all of them, encouraged and planned meetings and training days. For many, “Sr Mary and the Movement in Cape Town” were synonymous. 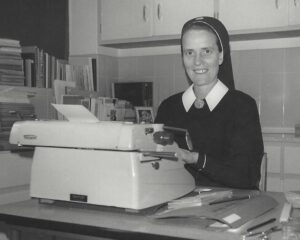 Sr Mary and the Movement in Cape Town

It was important to her that every Branch had a magazine. These were spiritually enriching and an inspiration for life and striving, drawing on texts from our founder. She had a natural talent of involving others in the production, and in this way, it became their Magazine.  She also used every opportunity to have the words of our founder translated, printed and distributed throughout the English- speaking Schoenstatt world. The many publications and magazines meant a lot of work, and at times she occupied two secretaries to cope with the typing, duplicating, printing and distribution. Sr. Mary was the first sister in our province to use an electric typewriter, later she was the first one to work on a computer!

Sr Mary excelled in organising days for children. The boys, some of whom are now grandfathers, still speak of the football matches which she planned. Unforgettable is the experience that some had with the Security Police during the Apartheid era. 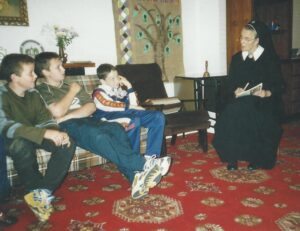 It was a weekend for teenage boys – all races happily united – which was forbidden in those days. The police arrived on the premises and shouted at Sr Mary. Unafraid, she looked at them and in a loud voice stated: I am educating strong, firm, free and priestly characters! They were taken aback by this answer and strongly warned her not to have such mixed-race meetings again. Subsequently, two of these boys were ordained Diocesan Priests and one a married Deacon.

Sr Mary was a person of great initiative and made use of every opportunity to promote unity and community. Her much-loved Table Mountain was open to all races, and so in 1977 she arranged the first shrine-to-shrine pilgrimage with about 150 participants, starting at the Constantia shrine and going via Table Mountain to the Villa Maria Shrine. This has remained a popular annual event with many participants not even part of the Movement. With her boundless and passionate apostolic drive, Sr. Mary arranged many national and international pilgrimages.

The annual Christmas Carols with a nativity play was also Sr Mary’s initiative. She managed to involve the children, the teenagers and even adults in the play. Sometimes there was even a ‘live’ baby in the crib. This became a great family event and is continued to this day. Candlelight processions, many and various celebrations, were all organised by Sr Mary.

A trusted friend to countless people 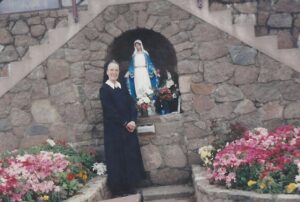 Sr Mary was a person of concern and compassion and was known as a loyal and trusted friend to countless people. The social standing of a person was not important to her: she recognised and acknowledged the dignity of each one and treated them accordingly. She made many house visits to help and encourage those who were suffering or experiencing hardship and difficulties. She led them to Our Lady in the Shrine, but also kept in touch with them.  Although Sr Mary was a very active person, she was also very prayerful, and had a deep love for our founder and Schoenstatt’s mission. All who knew her were enriched by her total selflessness, outstanding kindness, loyalty and generosity that always went the ‘extra mile’. Sr. Mary epitomised an authentic Sister of Mary.

Her name, Mary, was her mission and her prayer was

“Mother Mary, may your life be my life!”