An Afternoon of Disaster Relief

Ahrweiler, the otherwise picturesque town in the Ahr Valley has been hit hard by the flood disaster. For over a week we sisters have been helping some hours everyday at the “Church Assistance” site – the parish relief tent.

Sister M. Anrika Dold reports what she has experienced there

As we arrived at about 1:30 PM, a young man on a bicycle rode toward us and showed us the way. A man guided us while backing our car and then offered us his private parking place. He had a bakery here. 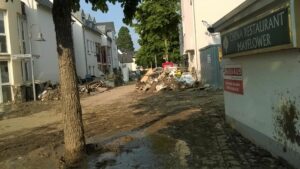 We had brooms and mops with us—also buckets. We soon realized that there was a need here. The buckets were gone within an hour and by evening there were no more booms, there were only some mops.

When we arrived with our things at the tent, we were first given an orientation by R, the on-site coordinator. Donations in kind arrived already while we were being oriented: large and small deliveries, packages of food, water, canned food, fruit, shoes, clothing, hand tissues, dishes, disposable gloves–Telecom also passed through and distributed some cell phones and powerbanks for free.

R. was responsible for the things that could and could not be accepted. R. had a flower shop, but it was destroyed. [He thought] it is better to pitch in here than to sit around at home. And that he does—from early in the morning until late at night, without enjoying any real break. 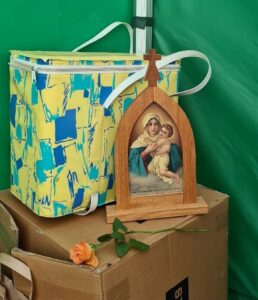 – as she was at the wedding at Cana: “… and the mother of Jesus was there.” Without many words, I simply placed her in the corner of the tent where we could put our private things. Later a woman handed out roses and gave us one. I put it before  the image of the Blessed Mother thinking: This one is for you, a rose for Mary!
In general, we experienced much openness and gratitude. We entered into conversation with so many people affected by the disaster.

♥  For example, a young man who came into the tent with his very pregnant wife and her mother told us that he came home just five minutes before everything broke loose.  He managed to help his wife escape with him to the highest floor of the house just in time—they would not have been able to get out of the house because the water came rushing in so quickly and blocked all exists. He said that now they are staying with her parents.  I immediately thought of the image of shelter seeking* and we spoke shortly about that. How good it is that they now have a place to stay.

♥  There were a few chairs in front of the tent and an elderly couple was resting there. The husband was sitting in the shade. He said that he has experienced so very many difficult things in his life. And tears came to his eyes as he told us how he lost both of his parents at the age of seven. His wife wanted to know to which community we belong. She had not heard of the Schoenstatt Sisters of Mary. I showed them our image of the MTA on a small card and said, “This is our picture of grace.” I told them that the Mother of God understands every suffering. I told the woman she could keep the card. The man put it in his pocket very reverently saying, “The cross is still hanging in our cellar – everything else was washed away. I’m keeping it. You know, I could never discard a cross even if I’m not really a church-goer. My pastor explained to me that there is a difference: There is God and Jesus – and then there is the Church.”
“And this God is with us now, too,” I could tell him, “through all the people who are helping. He never abandons us!” 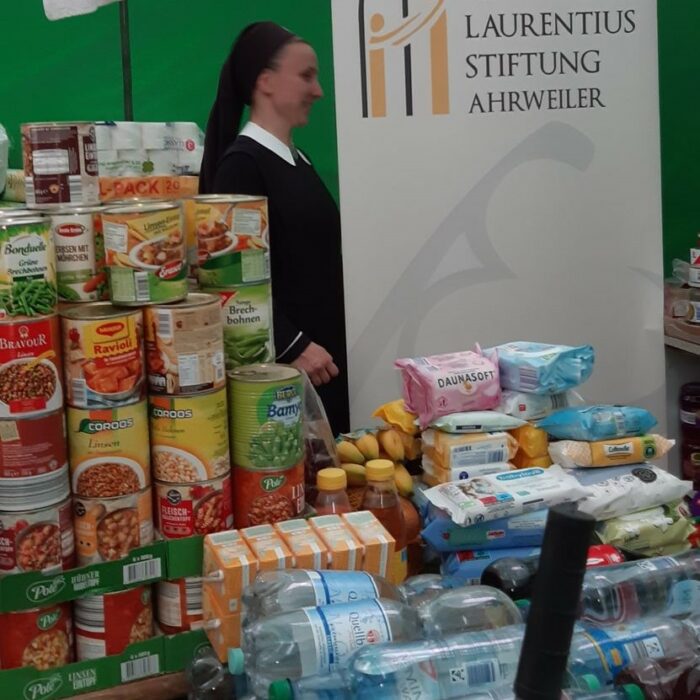 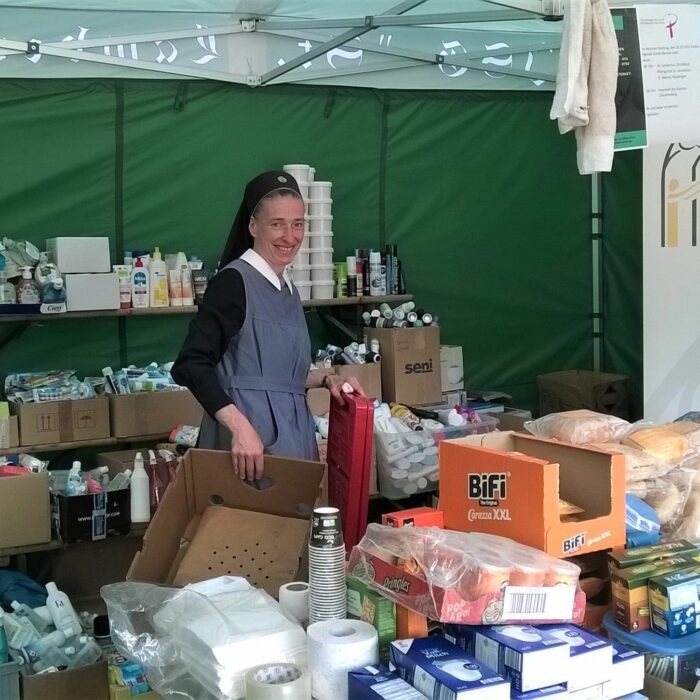 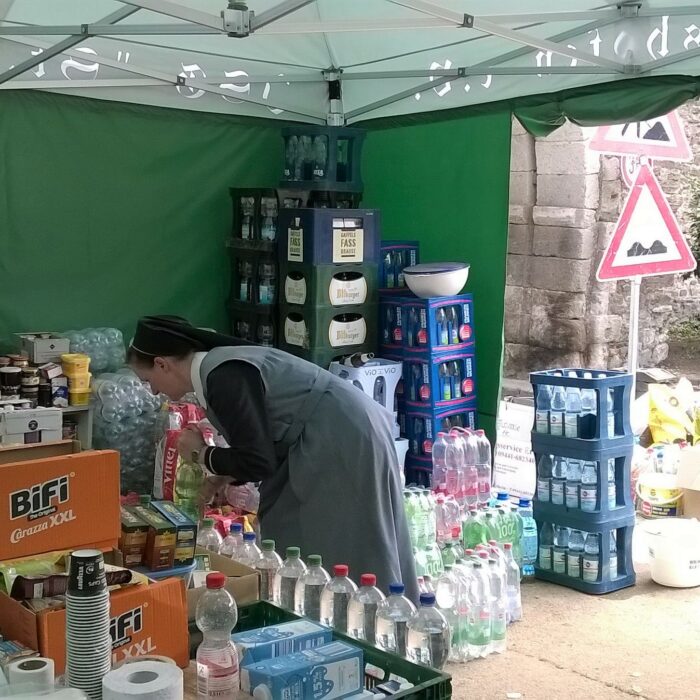 ♥  Another man who came into the tent hardly spoke a word. With faltering speech he told us where he is staying now after this flood: His daughter and her family took him in. He was moved by how they all took care of him. And then he told us about all he had already mastered in his life: His wife was infirm and he took care of her for 40 years although many people told him he should obtain a separation from her. She died five years ago. Again and again tears came to his eyes. He, too, received a little MTA-card and gladly accepted it.

♥  A woman who passed by told us that not until today did she learn that her two adult children are still alive. Until now she hadn’t had contact with them anymore—and she wiped her tears away. Devoutly she put the MTA card into her pocket and thanked us very much for it.

The time flew by. By evening I was really exhaused, but we still made a round through the city. We took with us little gifts that a kindergarten class left at out stand: Paper bags the children had decorated. Inside were little toys and sweets for children. 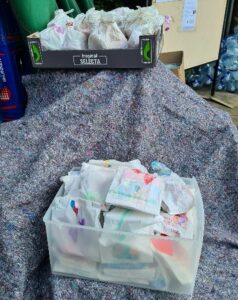 ♥  We had not gone 100 meters distance when we saw a few young people and a few children. We began to speak with them and gave the children some of the paper bags. The two young women said jokingly that there are also big children and they also received two bags. Then they explained that they worked here in the bakery. A young man said that at the beginning of this year he had taken the business over from his father. And now everything was destroyed, the entire bakery was gone. “Do you want to look? You’re welcome to go in.”
We accepted his invitation and looked at everything. It was still a picture of devastation even though the worst mud had been removed from everything. Then the master baker entered with his wife. When he saw me he said, “We’ve met before!”
It was the friendly man who in the morning had given us his parking place. They are all going to stick together now and try not to get discouraged. They will stand by each other and together will make it. It is as if we had known each other for a long time.

Yes, that’s my overall impression: In the midst of the disaster there is so much hopefulness — and it is visible by how much readiness to help exists in the depths of people. It is as a ZDF-documentary about the flood states at the end:

“Perhaps it is really true,
that the worst of times
bring out the best in us.”

Around 8:00 PM we returned home—the images of devastation and the fate of the people with us, but also the knowledge: It is important that we are there, that the Church is present.

Where else should it be now except near the people?