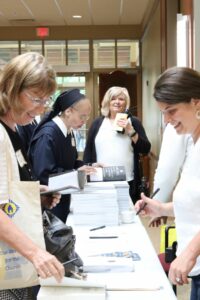 After having waited for two years, the Schoenstatt Mothers branch in the USA was able to gather at the Father Kentenich Hall of the Schoenstatt Retreat Center for the celebration of the 100th anniversary of women in Schoenstatt. It took place under the motto:

A beautiful day dawned on Saturday, June 26. We are grateful to the Heavenly Father for blessing us with rain so that our beautiful International Center could be green again after one month of drought. At 9:00 a.m., while music played, close to 120 women began to gather in the narthex of the Father Kentenich Hall to register, fill out their crown symbols, and find their bag with the booklet and other items. Mothers from eight different states had signed up: Wisconsin, Illinois, Indiana, Ohio, Minnesota, Maryland, Texas, and Florida.

In preparation for this event, several women had worked on the translation of the material for the Spanish-speaking participants who connected or attended. Ten Schoenstatt Mothers from the Milwaukee Archdiocese volunteered to help prepare the small background details of the celebration. Every member of the Schoenstatt Mothers branch who was aware of this event offered her prayers and contributions to the capital of grace for its fruitfulness and success. Among the staff, there were also six men helping as technicians, making livestream possible both in English and Spanish. Four young women from the young professionals and university students as well as women from the International Schoenstatt Center Volunteer Team offered a “Martha ministry” of dishes and dining room service.

The event began with holy Mass, celebrated by Father Pushpa of the Schoenstatt Fathers. He stressed the fact that just as it was in 1920, when the women’s branch began in Schoenstatt, so today, women need to bring their unique gift of service, sensitivity, and complementation. It is the gift that we bring to all relationships. It allows women to renew their lives and other people in the world. We should ask God to give us the grace of bringing out the best in ourselves and in others.

After a short break, the women gathered once again for the historical overview of the 100 years of women in Schoenstatt. Mothers from the Joliet diocese guided us in this reflection.

Loyal to the Royal in Us

Sue Vanderscheuren followed with a presentation on the phrase from Father Kentenich: “Loyal to the royal in us.” The dignity and original gift that women bring to culture and society was highlighted through slides and Sue’s reflection. An excerpt from her presentation summarizes her thoughts:

The world sees through eyes distorted by original sin; through lenses that often filter out the spiritual and focus on the temporal. The result is that our true essence is disfigured or lost altogether. To be fulfilled, women need to be proud to be the way they are and to stay true to their essence. The qualities that are innate in women are vital to the redemption of the world. Our vision of God is incomplete without the manifestation of these uniquely feminine qualities, and it was precisely these qualities that God called upon to bring the Redeemer to the world. In order to cooperate in their redemption and that of all humanity, women need to realize their true essence and their true mission in the light of eternity. The words Father Kentenich used to conclude his talk to the South African girls resonates with something in every woman:

“Be loyal to the royal in you; be queenly, be pure. Be pure in word, in deed, in thought, for don’t forget – we are as beautiful as the thoughts we think. It takes strength to remain pure, but the strength lies chiefly with the woman. Don’t forget your strength, your influence, your task, your calling. Be a child of Mary, be a little queen, ‘BE LOYAL TO THE ROYAL IN YOU,’ and Mary will again be found bearing Christ to a benighted age – and where you find the Mother, there you will find the Savior.”

Tours and Time for Prayer

A longer break gave the women time to have lunch and to visit the gift shop. At 1:15, those who wished to participate in a tour of different parts of our land gathered at the entrance of the Father Kentenich Hall. From there they walked together to the place of their choice, where a Schoenstatt Sister of Mary shared about the treasures of our Schoenstatt land, especially those connected to Schoenstatt’s founder, Father Kentenich. The designated places were 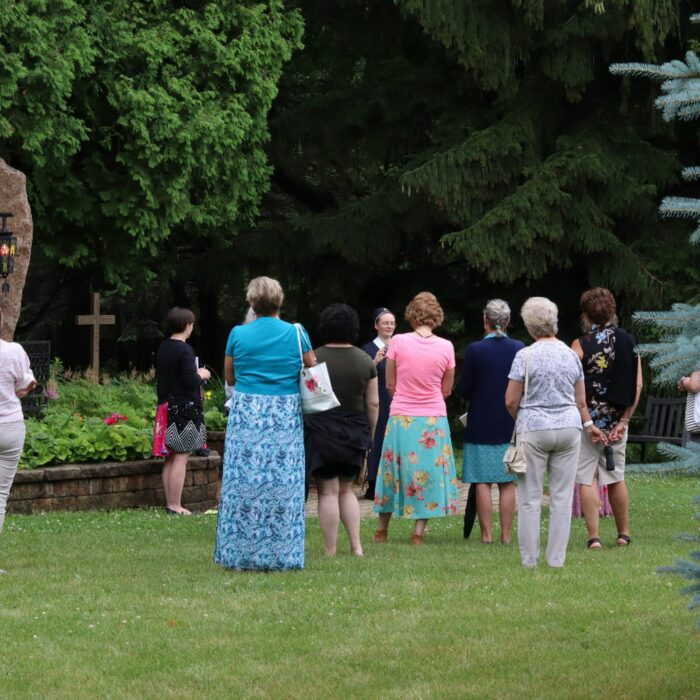 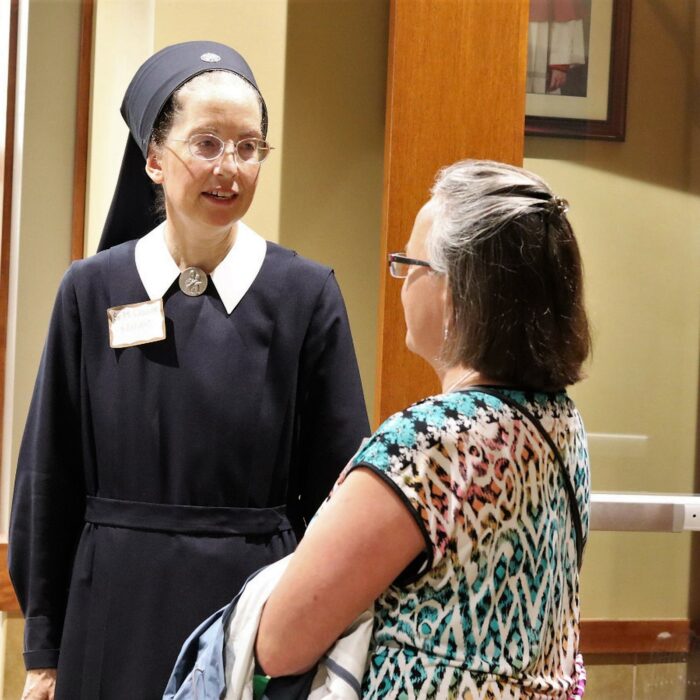 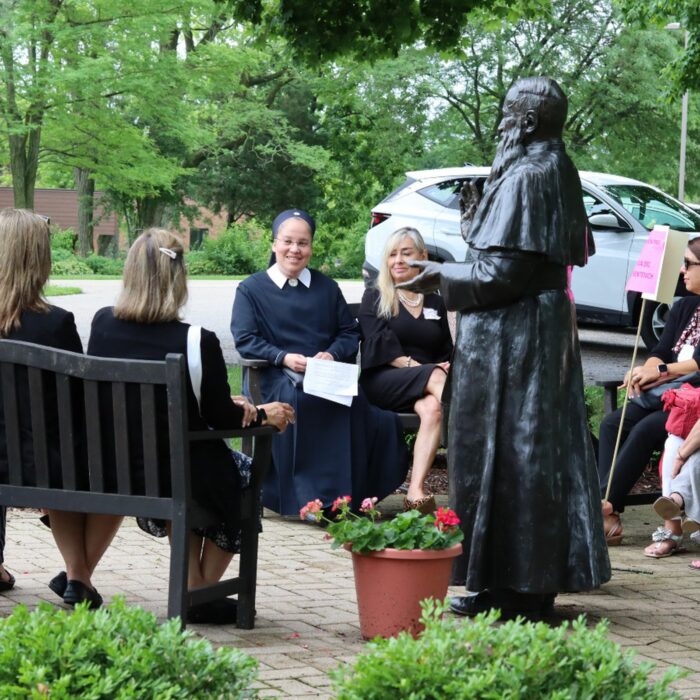 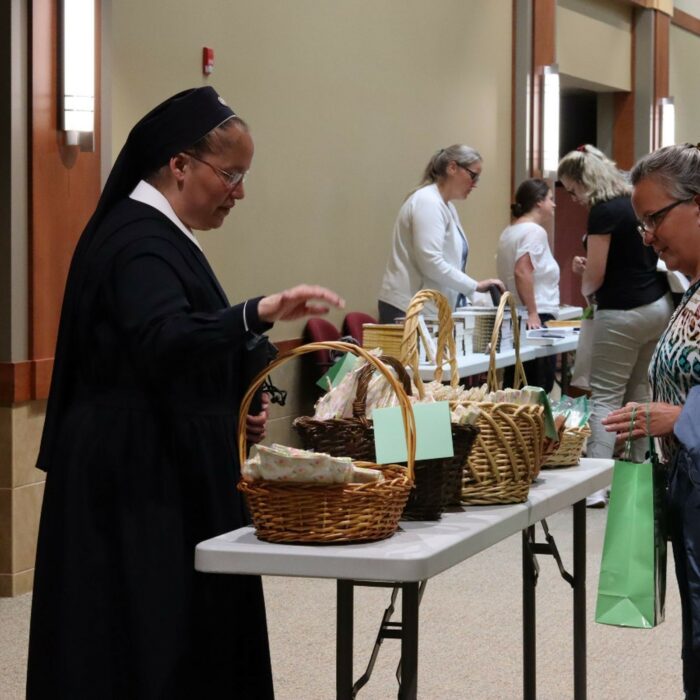 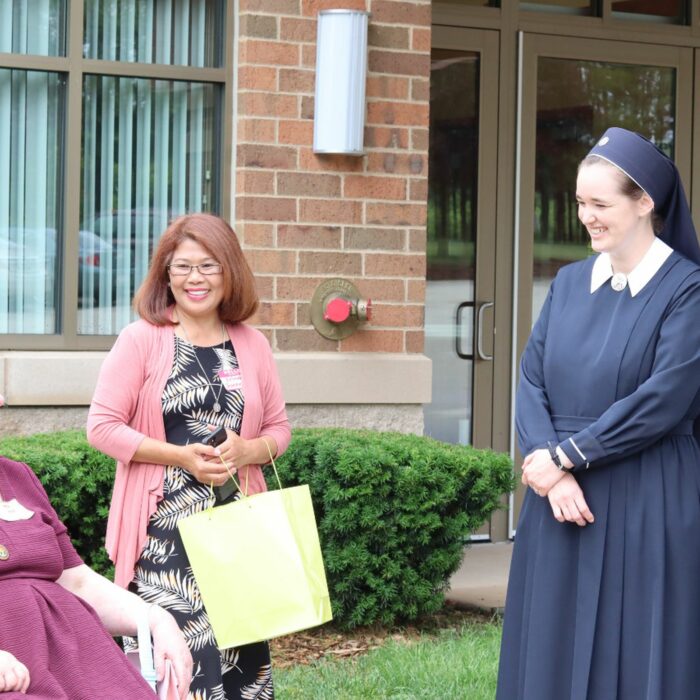 At 3:00 p.m., Julia Monnin, from Ohio, gave the keynote address. Her compelling words brought home the necessity to recognize our smallness as women who are touched by God. Even in the moments when we fail, and even if such experiences lead us to the cross, God continues to touch our soul, transforming it into a living reflection of Mary.

Julia authors books on her experiences; she also speaks and is a spiritual companion. She published her first book, The World Is Noisy – God Whispers: Volume I, in 2017. Here is a short quote from her presentation: 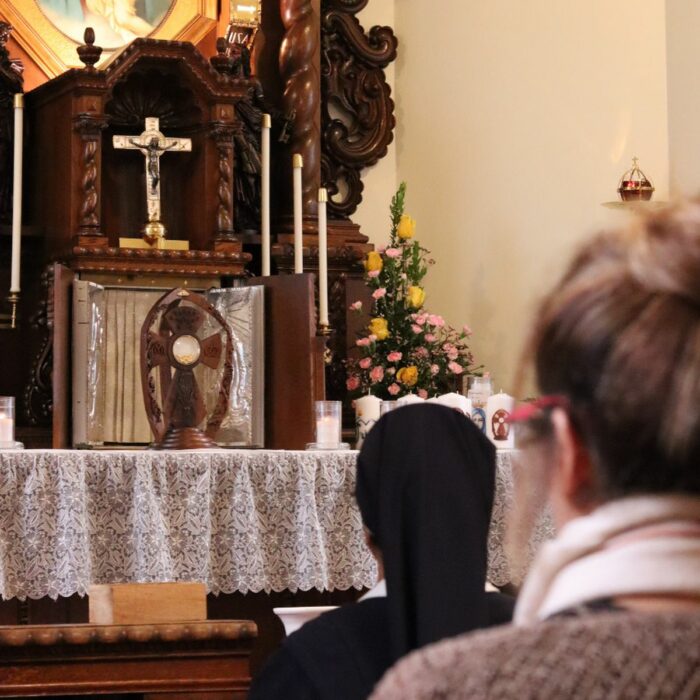 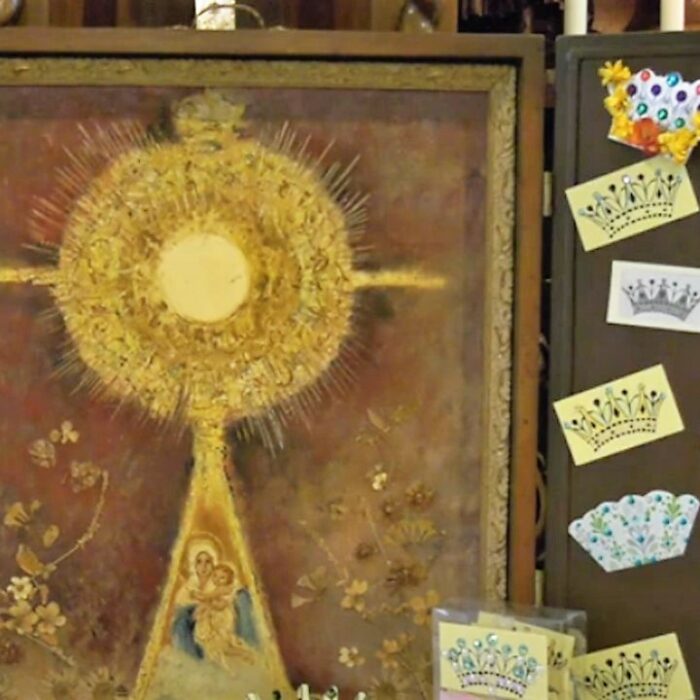