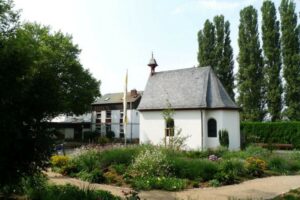 During the summer of 2019, several Iranians contacted me at the

with the wish to become Catholic. Each one had their own history regarding how they had come to this decision.

With admission into the “catechumenate” by Father Vogt on the First Sunday of Advent, the official preparation (for becoming Catholic) was begun in the parish church. In the diocese of Speyer this is a one year program.

Even purely in terms of language – it was a help to have a Bible in Persian and German, so we could read the texts in both languages and discuss them.

Additionally, it was challenging to explain the material as simply and clearly as possible.

It was important to me that the candidates for Baptism experience the liturgical year, participate in Holy Mass, and become acquainted with various (Catholic) customs and thus the former Muslims could grow step by step into a life of faith

Looking back, everyone said that it really does take time to master certain things—for example, personally reading the Bible, prayer, and above all, being united with God in everyday life.

as does the “Shrine of Joy” here in Herxheim.

We usually met every other week. Both sides needed time to breathe deeply between meetings.

The four who persevered had many questions. We often compared our Christian thinking with the rules and regulations of Islam. N. and T. also enjoyed helping practically; for example, with the herb bouquets for August 15, the harvest altar for Thanksgiving, and packing Christmas gifts and Easter greetings for our employees.

At the beginning of 2020, it was clear that we could apply–for example, in Speyer–for Baptism and admittance to the Catholic Church. Each one searched for their own Baptismal name; we adorned the Baptismal candles with symbols that were important to them, planned the songs for the Liturgy of Baptism, and each one formulated two petitions for the Prayers of the Faithful. Beforehand, I sought out godparents from the parish and on one afternoon each person to be baptized met with their godparent. 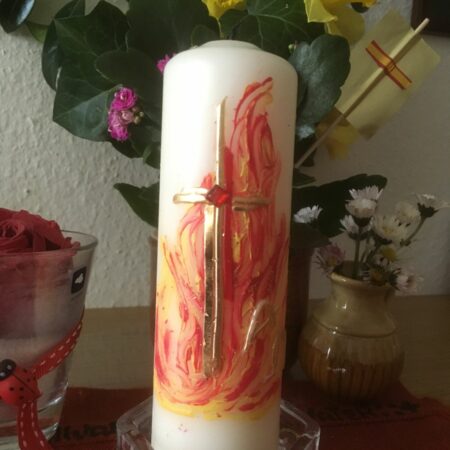 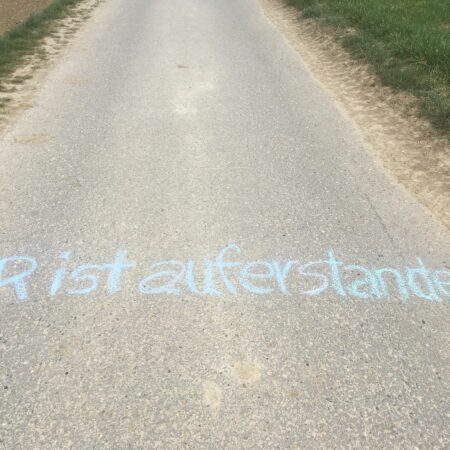 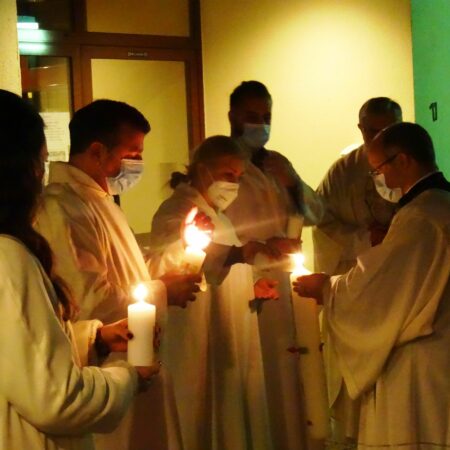 After that everything happened very quickly.

The permission arrived shortly before Palm Sunday and we scheduled the Baptisms for March 27. Only a few people could be invited (due to the pandemic) but that did not dampen the festivity, especially the joy of the four.

There is a difference between talking about a Sacrament and its meaning and truly encountering Jesus. We participated together in the Holy Week services of the parish; it was important to the group to experience in common Holy Thursday and Good Friday. 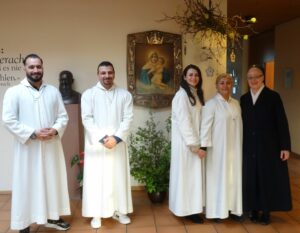 It was a gift from heaven that the pandemic restrictions in this country were changed and it was possible for them to receive their first Holy Communion on the feast of the resurrection. The four of them were present at the Easter Vigil and could celebrate the Easter liturgy. One of the readings was in Persian, and at Communion, a very beautiful song by an Iranian music group was likewise in Persian. Many who attended the service later said that they were touched by these first Communions and the solemn liturgy.

Monika, Christina, Jonas und Johannes are very grateful for what they received during the preparation. With applause, we warmly welcomed them into the church as new “brothers and sisters.” 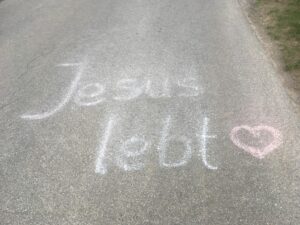 Recently, Anna Maria, who is from Vienna and works at Missio-Austria, has been of great help to me. She is Iranian, a theologian, and has translated many materials into Persian which she made available to me. I find it beautiful that I could prepare seven Iranians for Baptism.

I would like to thank everyone who accompanied us along this path with their prayers and who were always “present” at special times, not least of all, on April 16, when Christina had to appear in court in Trier. We really have experienced “wonders.” This was an experience of faith and hope for everyone. The most important thing: to experience the living God, his interest in us, and his love and providence.