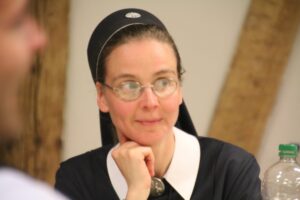 What do I Want to do With my Life?

Sr. M. Linda: Sr. M. Anrika, some years ago—no, acutally, many years ago – we were making a round trip by car. Our goal was the Schoenstatt Center in the Diocese of Augsburg in Memhoelz, Germany. You were responsible for the apostolate with the youth there and I for the women.

Sr. M. Linda: So do I. During those long trips we talked about every possible topic. Among other things, a question came up which remains important: What do I want to do with my life?

Sr. M. Anrika: Yes, this question stays with me always. I think about it again and again in various ways. At that time it was very intense because I thought I had found the place that was perfect for me.

Sr. M. Linda: Where and when was that?

Sr. M. Anrika: For some years before I joined (the Schoenstatt Sisters of Mary) I worked as an educator in a psychotherapeutic/therapeutic children’s home in the Black Forest. Its location alone was a dream. The residences for the groups consisted of large wooden houses, and there was an old mill in the village that was used for the special school of these children. That was very intense and interesting work.

Sr. M. Linda: So, really, everything was going well for you! 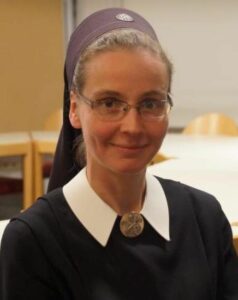 Sr. M. Anrika: Exactly! Nevertheless, after a while I became somewhat restless. On the one hand, I was incredibly happy there. On the other hand, I wanted to be more involed with my faith and to work with youth—as I was accustomed to doing it in Schoensttatt.  The question: Where do I want to give all of my time and strength was more and more on my mind?

Sr. M. Linda: That is a fundamental question: How do I want to live my life?!

Sr. M. Anrika: Yes, again and again this question rose up in me. And then—to this day, I don’t know exactly how – I was sitting there in the living room on a Sunday morning during my shift  in the home of my residential group:  How do I want to continue with my life? And then suddenly this thought came to me: How about becoming a Schoenstatt Sister of Mary?  It hit me like a bolt of lightning! And I honestly have to say, I was shocked. My first thought: Where is this question suddenly coming from? I had never thought of such a thing. That was somehow very distant—even though I was active in Schoenstatt and knew the sisters.

But it was just never in my plans to become a sister myself… I tell you, that really struck me…

I resisted the idea and tried to suppress it. But I simply couldn’t dismiss it. At some point, I did consult a sister. And, I have to say, her reaction was great–not at all imposing. (She said) that I might want to openly and freely pursue this thought. But not in a vacuum, but really with God, and with the Blessed Mother to whom I also had a connection in prayer.

Sr. M. Linda: So don’t think endlessly about it alone, but talk about it very concretely with God.

Sr. M. Anrika: Exactly. I tried that. It was a real struggle for me. But ultimately, I made the decision (to join the Schoenstatt Sisters of Mary.) And I am still amazed today about how God managed that with me. He did it really well!

Sr. M. Linda: All’s well that ends well, you might say. But actually, it was only then that things really got started. 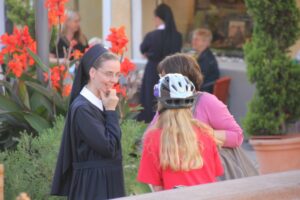 Sr. M. Anrika: Very soon after novitiate I began to work with the (Schoenstatt Girls) youth. I did that for a few years. After that I worked with young adults, primarily with young women.

Sr. M. Linda: And now, together with a co- sister, you have your own YouTube channel with the interesting name “Beyond the Ordinary.” What‘s that about?

Sr. M. Anrika: The subtitle gives the explanation. It’s about: The Art of Christian Living. We explore the question of how to live a Christian life in today’s society and we offer answers and “applications” from Schoenstatt’s spirituality. We encourage people to walk the Christian path – and to do so with joy and a certain ease.

Sr. M. Linda: I can imagine that your own path with God is certainly also a treasure trove. Therefore, my final question: Is being a Sister of Mary ordinary or is it unusual – that is, beyond the ordinary? 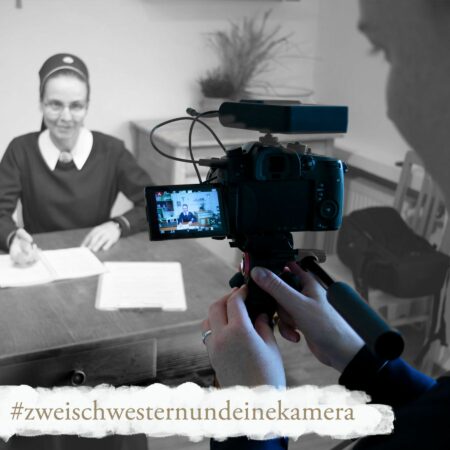 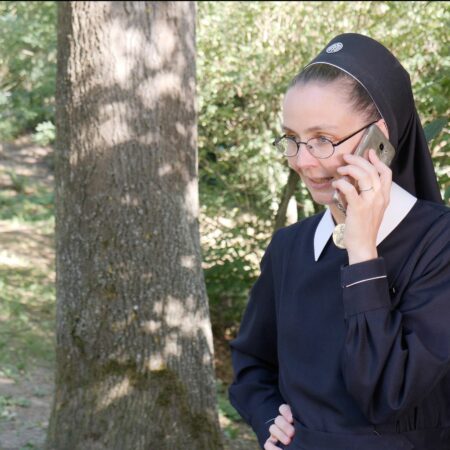 Sr. M. Anrika: The step was not common. But today this life has become ordinary for me in the best sense of the word. Because it is my path. It is my life. Ordinary – and always something special.

Sr. M. Linda: Now I have to ask my very last question: What do you like best about the Christian art of living as a Sister of Mary?

Sr. M. Anrika: Beginning every day anew with inner freedom! Of course, it is always a challenge, but a really good one!

Sr. M. Linda: Sr. M. Anrika, thank you for this conversation. And especially for your yes “back then”. It really would have been a pity if things had turned out differently!