My name is Sister M. Angela Zam and I have been a member of the Secular Institute of the Schoenstatt Sisters of Mary for thirty-three years. I would like to tell you about a co-sister who had an impact on my life and on the lives of many others long before I entered the Institute: 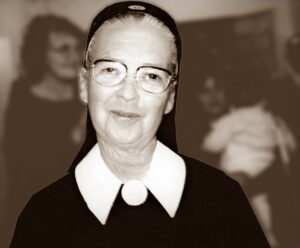 Sister Maria José was born on July 27, 1930 in the interior of  Landesinnern von Cruz Alta, South Brazil. She died on December 18, 2000. She returned to God the Father at 8 p.m. This was precisely the same time that the covenant Mass began at the Tabor Shrine in Santa Maria, Brazil. There was a large group of pilgrims participating in this Eucharistic celebration. In the past, many months on this day Sister  Maria José welcomed the pilgrims and attended to them.

When her coffin was placed in the Tabor Shrine at the conclusion of the prayer service renewing the covenant of love, the Christmas lights adorning the roof and walls of the Shrine were  turned on. It seemed like a greeting from God whom she loved so very much and for whom she had given herself so totally from the shrine.

When I was six years old I met the Schoenstatt Sisters of Mary in my hometown, in the interior of the municipality of Independência. The first time I met them,  I was inspired by their common uniform dress and also by their founder, Father Joseph Kentenich.

Sister Maria José worked in our parish. She lived as an extern member of the community of the Schoenstatt Sisters. She was the director of catechesis and helped with all pastoral activities. It was beautiful to see her come to our parish with the pastor and, first of all, to kneel down in front of the tabernacle to greet the Savior. Later, when I was a Sister of Mary, I learned that she had made it a custom, as an extern member of the community, to begin each day with an hour of Adoration in her house chapel. For six years she also belonged to the Adoration Sistsers of the Institute.

Sister Maria José united two polarities in herself: a strong inclination toward the apostolate and an intense life of prayer.  In 1996, I had the opportunity to live near the Shrine in Santa Cruz do Sul where she also lived. She prayed much, but she was also a great apostle. She attended to many people and she led them to the shrine. In Santa Cruz do Sul and also in Santa Maria, where she was responsible for the reception of pilgrims at the Tabor Shrine, she was a confidant and counselor for many people who yet remember her fondly. 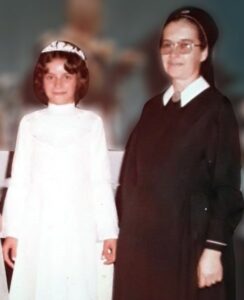 The sisters tell how she—despite the great geographical distances within the community—fostered contact with the shrine and also with the sisters by means of regular correspondence. There was, of course, no internet in those days. Very consciously, Sr. Maria José strove to live the Marian lifestyle to which the Sisters of Mary aspire. She was particularly attentive to small things, such as decorating the picture of the Blessed Mother with a beautiful flower arrangement, especially on Marian feasts.

In her apostolic work, she placed much emphasis on the pastoral care of vocations. First of all, she did it through her being, which attracted and inspired children and youth. But she also made an effort to bring the girls from the interior of the country to Santa Maria for vocation days. Even the girls who chose a different path in life remember these experiences and everything they learned at these vocation gatherings.

A significant event that helped decide my vocational path is connected to Sister Maria José. I received my first Holy Communion when I was ten years old. On our day of preparation she told us that we could ask three wishes of the Savior.  One of the wishes I asked of the Savior was to grant me the grace to become ‘just like sister.’ It took a while. I even “fought“ against the idea of becoming a sister but ultimately the Savior fulfilled my wish.

I give thanks for everything this very dear co-sister meant in my life and also in the lives of numerous people and families.