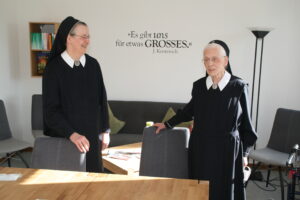 celebrated her hundredth birthday with remarkable alertness. She was born on March 7, 1921 in Düsseldorf-Benrath. After completing school she first worked in an office.

She had her first contact with Schoenstatt in 1942. The centenarian tells us,“Actually, I wanted to go to Kevelaer, but my mother said I should make a pilgrimage to Vallendar because my sister worked there.”  This unplanned short visit eventually turned into a relationship of love and life that was planned.

Sister M. Erintrud said that she never regretted her decision. She joined the Schoenstatt Sisters in 1944. She describes it as a special event that on May 20, 1945 she was able to experience the return of Schoenstatt‘s founder, Father Kentenich, from the concentration camp.

“I will never forget that,

I will always remember that with joy,“ the centenarian said.  She made her perpetual commitment to the Schoenstatt Sisters of Mary in 1953.

In Stuttgart, she began her training to be a kindergarten teacher, later also to be a youth leader, and in 1948 to be a teacher. She then worked in various institutions, for example in Westheim in the Sauerland region in a model kindergarten. She remembers: “At that time, the children came to us at the age of three. I thought it was important that the children were with their parents during their earlest years.”

Further places of work were Duisburg, Tübingen, Krauchenwies near Sigmaringen in Swabia, Bliesheim and the Schoenstatt Center in Essen-Kray. Sister M. Erintrud worked as an educator until she was 70 years old. But even “in retirement” in Borken, she does not sit back idly. Now, she doesn’t live in a retirement home at one hundred years of age but makes herself useful where possible. She is interested in current events, whether it is in the house or in the world. She benefits from the fact that she learned to type as a teenager. Today she uses the computer to write down her memories. (Source: Gehling, Borken Newspaper) 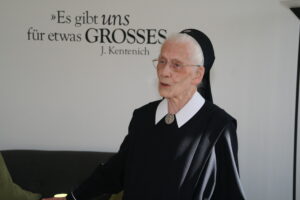 Today we are allowed to look into her memoirs:

“My heart is too small to sufficiently thank God for the experience of his steadfast guidance every day [of my life]. Learning to know and love the Triune God through my parents, especially by my father, characterized my childhood and adolescence. I like reflecting on my first Holy Communion. The baptismal promises were spoken alone; I said them loudly and inwardly with confidence. It was a deep inner experience of God, the Heavenly Father. My father and mother and my brothers and sisters were everything for me.

Formerly we became adults at the age of 21. And that’s when I came  to know Schoenstatt.

On the way to the Original Shrine in Schoenstatt, I heard my sister say:

“Take off your shoes, because the place where you are standing is holy ground.“

I joined the Schoenstatt Sisters of Mary on October 2, 1944. My postulancy was in the Wildburg in Vallendar. Already then I learned to know the sisters, and I experienced that the place is ‘holy land’.

My astonishment and inner enthusiasm increased when I was allowed to visit the houses in Schoenstatt during the pre-novitiate. I absorbed how the sisters were looking forward to the return of the founder of the Schoenstatt Work from the Dachau concentration camp and how they were also preparing themselves inwardly and outwardly.

My first family experience–as I never could have imagined it—was when the founder returned to Schoenstatt from the Dachau concentration camp. The joy of the reunion was enormous and cannot be described. I could only marvel and rejoice with everyone.

In the first week after his return, through eight lectures, the founder of the great Schoenstatt Work prepared 17 young women – our course. The investiture took place on May 31, 1945, in the Wildburg. Many sisters participated who, due to the war conditions, had not been able to experience their investiture in this way.

Time and again I also have to thank for my many transfers. I came to know our sisters family from many sides, and I learned to rejoice in it. The transfers were also painful, and yet – behind all sorrow was the Father in Heaven, whose plans are always good.

I can hardly believe that on March 7, 2021, I celebrated my hundreth birthday!

The highlight was the joyfully themed Holy Mass: “O Lord, I will sing to you, my song of praise, God, [I am] dedicated to you! My God, who has set me free! … that new people may be born, free and strong on earth, living like Christ in [times of] joy and sorrow…”. 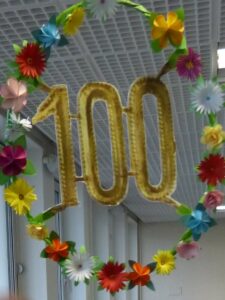 Then came the community breakfast. In the dining room, at my place, a flower plaque with the number 100 greeted me. Wonderful: a wreath trimmed with many, many colorful flowers. Yes, I could only marvel!

Everyone sang a joyful congratualatory song, specially composed for me. The sisters of the provincial council and my superior congratulated me, and the joyful faces of all said congratulations. This was followed by a serenade from our music group.

How lovely the table music was. I clearly felt how much my co-sisters rejoiced with me in having experienced God‘s greatness and goodness.

My relatives came from Düsseldorf and the surrounding area, that is, from far away, to congratulatae me for half an hour. They sang several songs in the lobby in front of the cafeteria. Of course, my nickname from my youth was not missing.

I could only marvel and rejoice deeply, that at 2 p.m.

I was completly alone in the shrine for quite a while.

I could sing songs and pray out loud. There I celebrated this hundreth birthday with my course sisters who are all already in heaven and I offered the Blessed Mother the crown anew!

The day passed very quickly–reading the congratulations and greetings, with many beautiful visits, memories and conversations that were a gift to us all.

The congratulations from our sisters in India was a special joy for me. For them I had parted with a precious “father treasure”: my crown for the image of the Mother Thrice Admirable in my home shrine. I had striven for this crown with my course, and Father Kentenich had held this crown in his hands and blessed it. 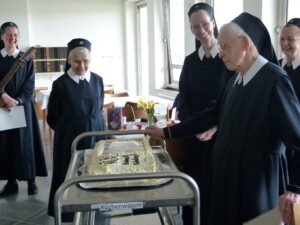 Just as we were about to sit down to the feast day coffeebreak , someone said, wait a minute. Our sister who is our chef brought a large, lovingly and personally decorated cake! Unbelievable, but true!

At the end of this special day, there was yet another surprise for me: What was it? Despite my hearing impairment, I realized: Someone is singing, aren’t they? It always takes me a little while to hear what is being prayed or sung. But then I heard! “Good evening, good night …” My co-sisters sang me an evening song. It is the song that accompanied our father and founder on the eve of his going home to eternity, September 14, 1968. And so for me, too, at the end of this day it is applicable:

Our way leads homeward to God the Father

My heart rejoices with my course sisters in heaven and with all who so joyfully celebrated with me: