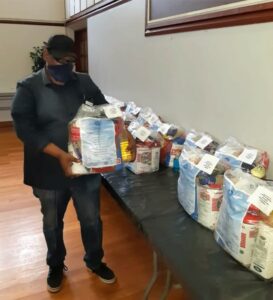 Since both our retreat house and training center as well the dormitory for women in Constantia could no longer be used as such because of the Covid 19 restrictions, and since we now had an empty building and a staff without work, we came up with the idea to begin a project to fight poverty. This was the moment our aid

was born. We concentrated primarily on giving meals to the hungry because this is most needed at the time.

As widely as possible we advertised for food through social media and in our Schoenstatt Movement and in this way came in contact with other relief organizations. The training center became the depot where people dropped off the donations. Our staff sorted the donations, packed packages, and then distributed them to the needy and to other charities.

During the last five months of the year 2020 we could provied 30 needy families in the suburbs on the Cape flats, called Retreat, with weekly food packages. It was heartwarming to see the surprized and radiant joy on the faces of the people when we knocked on the doors for the first time and handed over the food packages. Unfortunately , but understandably, gradually donor fatigue crept in so that at the beginning of this year we had to limit our food packages to once a month.

With the help of donations we could also support a further relief project: 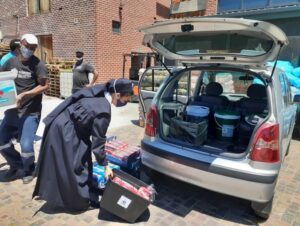 Sandra is an enterprising mother who lives in a shack in Khayelitsha. This huge shantytown was built on the sea sand of the coast on the south side of Cape Town. Because the schools are closed, the children experience hunger since many of them receive breakfast and lunch in school. Sandra,herself a teacher, decided to do something. She started a soup kitchen—with her small salary and any help she could get. She cooked the soup on her little stove with two burners in her own hut.

In this way she made available to the children in her community thousands of warm and nourishing home cooked meals. We helped twice a week. We picked up donated soup and bread from the breweries in Woodstock and often added whatever we had collected through donations. Then we  brought everything to her and helped her with the distribution. We could provide masks anddisinfectants also to all of the children. For her service, Sandra was awarded the „Lockdown HeroesTimes-Live Award. 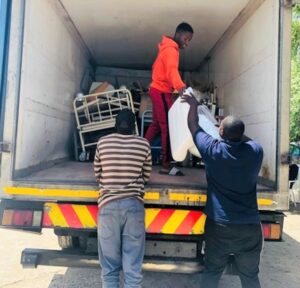 In Lange, another poor area of the Cape Flats, this time of the other side of Cape Town, the “Ikhaya Lanantu (Home of the People) Care Center was established. It is located in a converted barrack and was started by the dynamic Mrs. Nkanyuza. She is the director and the heart of the house. With minimal donations and curently without help from the side of the government she manages to care for 30 elderly patients in a fully occupied house. Her message to us was: “We may be poor, but we have water and the place will be kept spotlessly clean.“ We can testify to this! 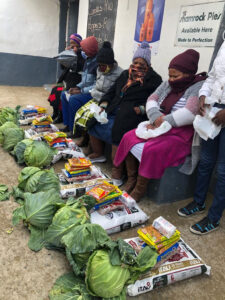 Through “Helping Hands“ we could organize a truckload of beds and various other exquipment that was used in the care of the elderly. The faces of the staff of this care center radiated joy when everything was unloaded and put in place. We immediately received a heartfelt message of gratitude and the assurance that every article received would be used well.

Help for the People in the Eastern Cape

In Cathcart, in the eastern Cape we participataed in a project that is led by a woman from the Schoenstat Movement. The majority of the people there are very poor. This woman made it her task to supply the poor people with food during this Covid time.

Help for People in the Eastern Cape  >