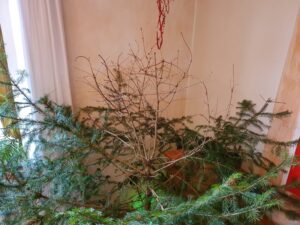 The Splendor of Imperfect

This year, too, Klaus went into the forest to select an imperfect tree. Four years ago, for the first time, the forester put out the invitation. They would be given free of charge. The crooked things had to be cut down anyway, the forester had thought, so why not give them away and let them have one last big appearance on Christmas. And so it came to be. Since then the friends of the crooked fir trees circle grew from one Christmas to the next.

From the beginning Klaus and his wife were a part of it. Initially Klaus did it for his wife’s sake and brought home one of the most beautiful imperfect trees. Meanwhile, he enjoyed watching how the trees were transformed by his wife’s creativity and skillful hands. He improvised so that it would remain exciting each year. He raised the level of difficulty by always bringing home a tree more imperfect than the previous year. He knew that magically his wife could make something of any tree. This time he intended to bring home the most imperfect of the imperfect trees.

Upon arriving at the forest he walked through the rows of trees. There they stood, future Christmas trees, one more beautiful than the other. Proudly the forester presented his most lovely trees to the flock of customers. Straight, thick, green needles, bearing tips like ornaments. And meanwhile … Klaus knew immediately: That was it!

The most imperfect of all the imperfect.

The top and the upper branches were already wilted. The few tender twigs below had spread wide apart because they had been allowed room to grow randomly. The effect was like the light hair of an old lady. The entire pine tree was thin and scrawny. Klaus knew immediately: That is the right one! It would challenge his wife’s imagination totally. The forester tried briefly to make him change his mind. Surely, it didn’t have to be the most crippled tree of all. But Klaus remained firm in his decision. It was easy to put the tree into the open trunk of the car.  Mischievously Klaus thought of his wife and her reaction when she saw the tree. She had always insisted that there was no such thing as an ugly tree. Nature is simply nature! This standpoint had always brought her success.

As he drove the car to the front door, some neighbors who were already at the window surprised him. They had waited eagerly for his arrival. Klaus gave them a friendly greeting, smiled at them, and calmly put on his gloves. It had always been his understanding that unusual experiences should be celebrated. He opened the trunk of the car, put his hand on the skinny trunk of the tree and lifted it into the air with ease. Spontaneous laughter and loud applause confirmed he was right: He had selected the ugliest of the imperfect. 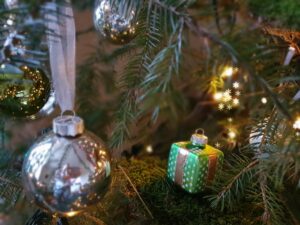 Before his wife, who was at the front door, could meet him, he opened the door, climbed the stairs to the living room and put the fir tree into the Christmas tree stand that was already there. Because everything had been prepared for him, the thin, lightweight branches caused him no problem.

Angela was standing at the door. A short shriek and then she was composed again. She embraced Klaus, gave him a kiss on the cheek, and said with élan: You really have confidence in me.

This time she waited a while before she began to work. Balls and little Christmas packages, Christmas tree decorations, stars, Christmas caps, moss, wire, lights and figurines for the crib…Everything was ready hours later when she began to decorate. The door was closed during this time. No one was allowed to disturb her. 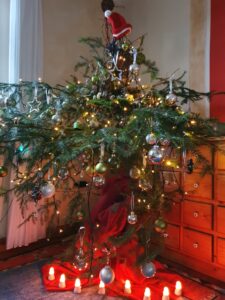 And then came the moment.

With festive Christmas music in the background, she opened the door to the Christmas room yet that night. It was unbelievable what was to be seen: A tree covered with balls and lights, absolutely splendid and vibrant. In the withered crown was a place for the crib.

The youngest daughter of Angela and Klaus called it
“the dancing Christmas tree.”

This is a true story. It was written down because it relays something of what the secret of Christmas is all about: The birth of Jesus, the Son of God, in the stable in Bethlehem can bring splendor to what is all too often, human, ugly, or even evil. God searches for the poor and lowly; he searches for people in order in order to gift them with his presence. There is nothing that can hinder him from being born into our human destiny. What we need is the readiness to hold him in the wilted branches of our life. Then we can also dance, because it is not beauty, perfection or wealth that constitutes our life. 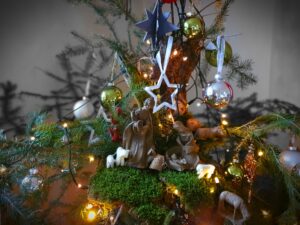 It is God who lends splendor and glory to it –
as this Christmas became the unique highlight of the life
of this crippled little tree.