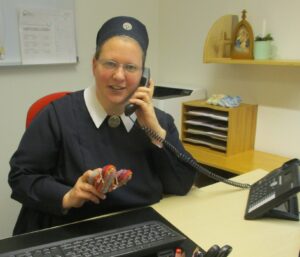 Because of my profession as an educator in a home for children, I meet with young mothers. In March 2020, I wanted to invite three mothers who were expecting a child to receive a mother/parent blessing. But then came the lockdown. The children’s home was closed from one day to the next and the connection to the parents was cut off. I regretted that the mother/parent blessing could not take place. I thought about it this way and that and told Father Kentenich about my regret.

Suddenly I had an Idea

Some weeks later, an opportunity arose.  I met the mothers again when we distributed home activity materials to the parents and children. I took advantage of this opportunity and asked the mothers if they would like to receive the mother/parent blessing. Two of the mothers, both of them Protestants, did not know about this blessing but happily said yes.

Then I spoke to the pastor of our parish and told him about it. I explained to him that I was of the opinion that we must discover new ways to evangelize during the coronavirus crisis.

Initially, he was reserved, but then he agreed to give the mother/parent blessing over the phone. On his own, he prepared a little devotion that he sent to the families.

Following the mother/parent blessing, I put knitted baby booties in front of the door of each family’s home. It was a small visual expression that the children may not have “cold feet regarding the faith” and that they may be able to “follow in the footsteps of their parents.”

The feedback I received testifies that this pastoral care was crowned with blessings: The pastor of the parish sent me the devotion and said that this was a very beautiful and special experience. And in the future, he wants to continue to give the mother/parent blessing – also over the phone. 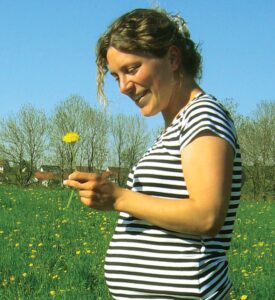 The mother of a little two-year-old child who is afflicted with a tumor thanked for the encouragement she received through the blessing. It brought her new strength and a new joyful anticipation of her second child. She said she was strengthened in her trust that God is with her little family.

The second mother received the mother/parent blessing just in time. A week later, her little daughter came into the world. She reported then that the encouragement she received from the blessing had come at just the right moment and gave her strength for the final days [of her pregnancy]. She needed to lie down a lot during the last four weeks. It was a tense time for her because her husband’s profession required him to be away often and her two children, a five-year-old and a child that had just turned two, were challenging. They cost her much strength.

Both mothers are very grateful for this religious experience and for the spiritual care.