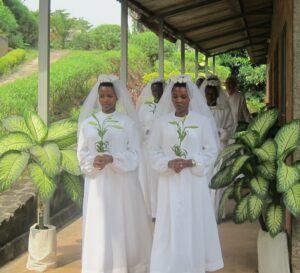 With great joy we could celebrate the investiture of six novices on October 25, 2020. Before joining us, each of them had belonged to the vocational discernment circle and was inspired by the ideal to be a little Mary. They, too, want to bring Christ into the world, and specifically as members of our community.

Filled with joy, the parents and relatives arrived at the shrine in Mutumba, where Mary, Queen of Trust, welcomed them warmly. While they awaited the arrival of the novices, a choir sang vocation songs. Then the novices left the novitiate house and processed to the shrine. There they prayed silently. After common prayer and a blessing by the General Vicar, Monsignor Anatole Ruberinyange, everyone processed to the parish Church with Schoenstatt flags in the lead.

In his homily, the General Vicar spoke about the gospel of the day, which calls us to love of God and to love of neighbor. He gave us examples of how wide this love must be. He said that when the novices receive their white sister’s dress and the Kirundi name “Mama” (in  Burundi the sisters are not addressed as “Sister”, but rather as “Mama”), they are called to be mothers for all people, to love generously, and to commit themselves to others. They are called to live as witnesses to the love of God. 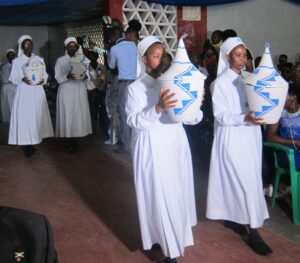 The rite of investiture began after the homily. Sister M. Lisette Seitzer, the superior of the delegation, called the novices by name, and each one answered: “See, I come!” The General Vicar handed them their new dress. Then the novices went into the sacristy to change. Radiant with joy, they returned in their white sister’s dress as little Marys and brought the offertory gifts to the altar in large baskets. The youth sang enthusiastically and provided an uplifting, joyful liturgy.

After the lively thanksgiving [of the liturgy], one of the novices spoke a word of gratitude in order to express the joy that was in their hearts. She thanked God that he had called them. She thanked the parents for welcoming their wish to consecrate themselves to God. She asked those present for the support of their prayers. In the shrine, the novices dedicated themselves anew to the Blessed Mother. As they left the shrine, they were congratulated by members of Schoenstatt who had accompanied them.

Lord, to Whom Shall We Go?

Significant words were spoken at the reception in the Covenant Center. The chairperson of the preparatory committee greeted the guests and wished them well at this place. Then Sister M. Lisette spoke in the name of the community. She thanked the parents who had prepared the ground for the vocation of their children. A special thanks was given to the novices, who answered God’s call with a free, joyful yes and who are ready with to carry with us the mission of our father and founder into the future. Sister M. Lisette closed with the invitation to the novices to trust in God as it was expressed in their motto for this occasion, “Lord, to whom shall we go? You have the words of everlasting life!” (John 6: 68) 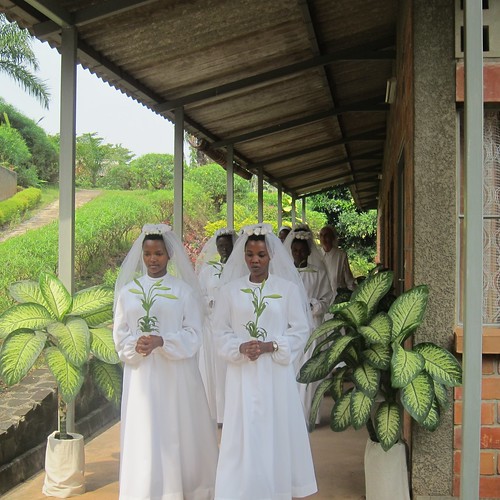 Apostles as Witnesses of Love

The celebration was enlivened by the dances of the candidates. Then the father of a novice spoke. He thanked the community of the Schoenstatt Sisters of Mary for welcoming their children and he expressed his joy that now there is a religious sister in their family. Father Login spoke in the name of the Schoenstatt Fathers and encouraged the novices to take joy in their vocation and to mirror Mary in their daily life. At the end of the banquet, the General Vicar expressed his joy that now in the sisters’ community, in the Church, and in the world we have more apostles who want to witness to love. In conclusion he sang a song of gratitude and blessed everyone present. 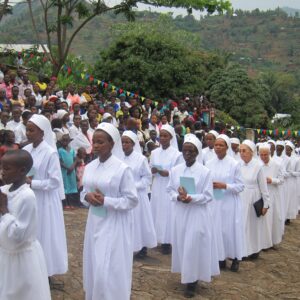 Protected from the Coronavirus

We thank our dear God, who until now has protected us from the coronavirus. Otherwise we could not have celebrated this richly blessed family feast with joy. We thank also for the gift of our six novices whom the Father in Heaven has given us.