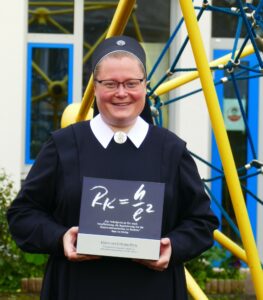 “MINT Teacher of the Year”

There is great joy in the Schoenstatt Marian School (SMS) in Vallendar, Germany—still in the splendor of its seventy-fifth anniversarythth—because Sister Christamaria Brueck, who formerly was a student there and now teaches religion, mathematics, and computer science, received the Klaus von Klitzing award on November 10, 2020. It is awarded to distinguished teachers of the so-called MINT subjects: Mathematics, Computer Science [“Informatik” in German], the Natural Sciences, and Technology. Klaus von Klitzing, the 1985 Nobel Prize winner for Physics, has a goal to promote special teacher engagement in the MINT subjects.

Virtual Bestowal of the Award

Ordinarily, Professor Klaus von Klitzing presents the award in Oldenburg, where the EWE-Foundation, which is responsible for the award in partnership with the Carl von Ossietzky University, has its headquarters. Because of the coronavirus pandemic, the award ceremony took place virtually this year. It was simultaneously live-streamed from three different places: Stuttgart, Oldenburg, and Schoenstatt.

In the spacious cafeteria of the school, Sister Christamaria and a small group of students and teachers excitedly awaited the award ceremony. With them were Sister M. Gabriele Schreck, principal of the school, and special guest of honor, Sister M. Aleja Slaughter, general superior of our community of the Schoenstatt Sisters of Mary. Many people watched the one-hour program via livestream with much excitement. 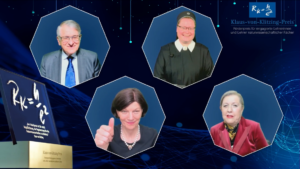 After words of welcome from Marion Roevekamp, Chairperson of the Board of the EWE-Foundation, and Professor Hans Michael Piper, President of Oldenburg University, and after a scientific digression by Christoph Hahn on the importance of kale, the longed-for moment arrived: the announcement of Sister Christamaria as the prize winner. Marion Roevekamp emphasized that a panel of judges had unanimously chosen Sister Christamaria from a group of 48 highly qualified applicants. Professor Klaus von Klitzing expressed his regret that he could not award the prize in person in Oldenburg, but virtually from Stuttgart, where he carries out research at the Max Planck Institute.

In her speech, Sister M. Gabriele Schreck stated that Sister Christamaria received the prize on behalf of the entire faculty, on behalf of many happily dedicated teachers. Sister M. Gabriele highlighted the “extraordinary commitment” of her co-sister as well as Sister Christamaria’s genuine enthusiasm and her ability to develop the best in her students.

Literally she said, “It is imperative to find answers today to the many pressing questions in ethics, medicine, and ecology, to name but a few of the burning issues. We need women like you who are committed with heart, mind, and will, and who empower many young people to commit themselves to finding viable and responsible solutions.”

The principal of the school sincerely thanked Sister Christamaria for her valuable contribution to SMS. She stressed that like Father Kentenich, the founder of Schoenstatt and of the school, she always has her ear on the heart of God and her hand on the pulse of the time. In her words of gratitude to the founder of the prize, Sister M. Gabriele referred to the prospect that the award could help in discovering and training female researchers of the future, and in this way help to fulfill the responsibility of Christians to form society anew. She emphasized: “Precisely young women are needed to bring the feminine perspective to the MINT fields so that a more rounded view comes into play. As a girls’ school with an emphasis on the natural sciences, our very specific mission lies in this.”

The Robotics Team, a fun activity

Gratefully and with pride, eleventh grader Karolin Graewer gave a laudatory speech. She said that already in fifth grade, in her religion class and in her basic information technology class, she experienced Sister Christamaria as a “special teacher.” Since sixth grade, she has been participating in “robotics weekends” for the Robotics Team that Sister Christamaria leads. She enjoys robotics and programming so much that she and other interested students have participated successfully every year in First Lego League competitions. As the student confessed, the Robotics Team is a lot of fun.

Finally, she told us Sister Christamaria’s recipe for success: “Every Friday she shows us how much enjoyment and fun one can have with technology. She gladly helps us with problems and gives us hints but she never gives away the actual solution. She always allows us to try everything, and if it doesn’t work, she encourages us, telling us we’ll find a solution soon. She simply convinces each one with her untiring commitment. Her positive manner passes over to us students and that’s why we could never be without the club in our school.”

Further, Karolin Graewe pointed out Sister Christamaria’s involvement with the digital media. In 2017 Sister Christamaria and a small group of students set up the school’s own communication platform Cocuun. All of the students, teachers, and parents benefit from it. Karolin Graewer continued to explain that Sister Christamaria is not only important because of her technological know-how with which she advises the students in the Tech Team or leads the construction of a new homepage for the school, but also because maintaining Christian values is important to her, as is the development of personalities. She promotes both of these by offering meetings before school and by inviting us to the “I Need to Get Away” weekend pilgrimages.

The student also praised Sister Christamaria’s “passion for math,” her patience when giving explanations, and the relaxed manner in which she also motivates students for whom math is not exactly their favorite subject. In addition, Karoline Graewer confessed, “Sister Christamaria is always ready to listen to us and she gives us the necessary time for taking in our needs and concerns. In this way, one senses the rapport she has built up with us students. We can learn much from Sister Christamaria, not merely scholastically but especially about being a good person. With her joy of living and through her open, friendly manner toward others, she has become an example for us.” 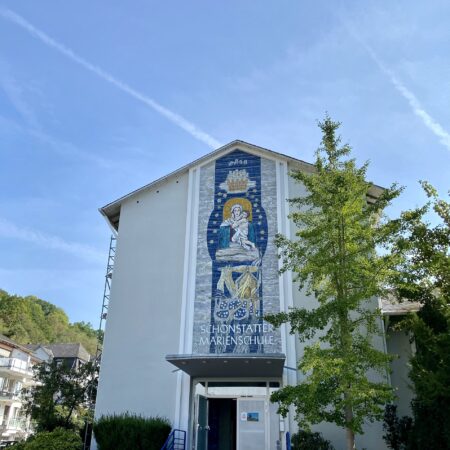 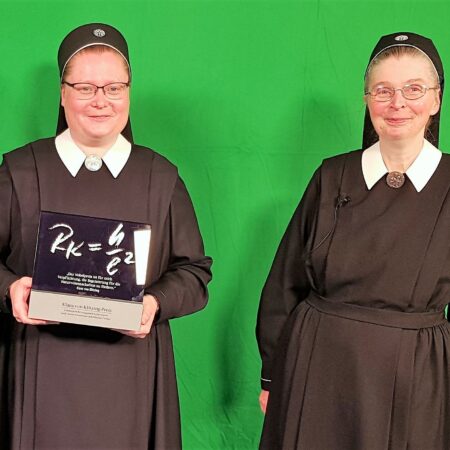 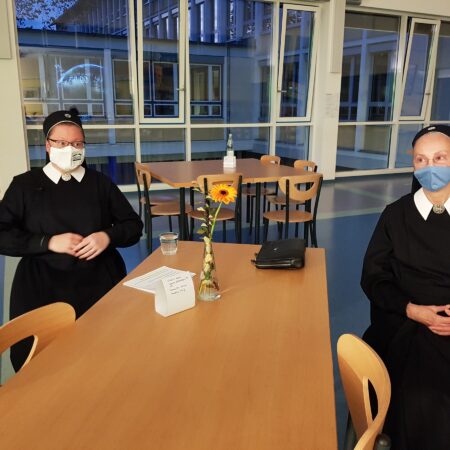 Karoline Graewer is convinced that Sister Christamaria definitely earned the Klaus von Klitzig Prize “especially by showing through her commitment to the MINT disciplines that girls also can be good in these areas which are still considered dominated by men. Therefore she emphasized that Sister Christamaria is the first sister and the first woman to receive this distinction; she follows six men who won the award consecutively. By promoting young women, she gives us insight into areas we might never have dared to enter. She encourages all of us never to give up and to keep going no matter how many obstacles there are along the way.”

Great gratitude to the students and faculty

In conclusion, Sister Christmaria thanked the EWE Foundation, Professor von Klitzing, and the panel of judges for the award. Then she thanked the start-up IT class that graduated in 2018 for their enthusiasm and their willingness to invest their time and for giving the impetus to begin robotics at SMS. Moreover, she thanked the friends of the school and the alumni for their generous financial support as well as the school’s administration for the “room to unfold.” She likewise addressed words of gratitude to partners outside the school community for their good cooperation and their contributions: to Dr. Fislake from the University of Koblenz and to Mr. Schwaderlapp from Exec Software.

Sister Christamaria directed her thanks also to all of the parents who contributed their expertise to the team, especially Mrs. Plies and Mrs. Poetzschke. 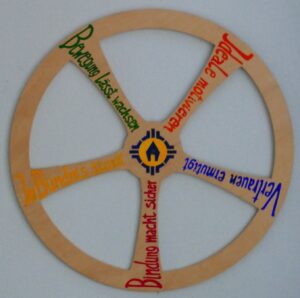 But Sister Christamaria expressed her greatest gratitude to her students and colleagues because it means a lot to her to work together with them to organize the school day in such a way that students receive the opportunity to unfold their talents, to develop their personalities, and to seize opportunities. Sister Christmaria confessed:

“Co-responsibility, creativity, commitment, friendship, and team spirit count here with us. With all my heart I thank you for your cooperation! I am firmly convinced that the Klaus von Klitzung award is not only mine but belongs to all of us. Thank you!”