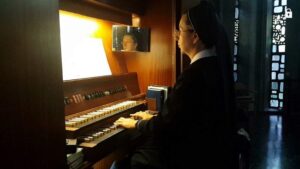 Actually, at this point I intended to write a report about the jubilee events for the 10-year anniversary of the Religious Evening Music Series at the Schoenstatt Center at Liebfrauenhoehe, Germany.

But Things Took a Different Turn!

Instead of the jubilee series, it became a pandemic series of an overwhelming number of cancelled events! However, at this juncture it would be inappropriate to join in lamenting. As Sisters of Mary, we are well trained in the school of faith in Divine Providence, and we know that everything is ordained by God and always works for our good. “We know that all things work for good for those who love God, who are called according to his purpose” (Romans 8:28), and “we want to say a cheerful, sincere yes to all the plans of the dear God” (Father Joseph Kentenich in Ennabeuren, 1945). In the face of the tense coronavirus situation, this is not so easy.

But how did it go with the religious evening music at our Schoenstatt Center during Covid?

In February, the jubilee series was announced in a very enticing way with three large, colorful photos in the local media:

“The Debut of a Pan Pipe for the Tenth Anniversary!”

The first concert was on February 9. It was a premier, the first time a large orchestra performed in the church: the Doctors’ Orchestra of Tuebingen directed by Ulrich Buerck. The music brought so much warmth and joyful movement into the walls of our Church of the Coronation that we could sense a bit of the joyful Marian lifestyle through these tones. Even the members of the Doctors’ Orchestra seemed very moved by the church interior, the atmosphere of the house, and the encounters with both the sisters and the audience. This was a wonderful kick-off event for the continuation of the jubilee series.

But Then Things Took a Different Turn …

In the middle of March we went into lockdown due to a pandemic wave spreading further and further and not to be stopped. Keeping any more concert dates was out of the question. So the performance of saxophonist Christian Segmehl and Stuttgart Cathedral organist Johannes Mayr, as well as a concert of four combined choirs under the direction of Peter Straub, had to be cancelled. In July, Polish singer Marta Radwanska was not able to travel from Warsaw.

The late summer months came like a break from this phase of stagnation.

In September, it was not possible for violinist Prof. Michael Grube to travel from Quito, Ecuador, for the concert. Fortunately, this gap could be filled by the Rehfeldt Family at a later date.

The fact that due to this switch the Rehfeldts now led the kick-off for the continuation of the jubilee series was for me ultimately a special gift from heaven. I became aware that I owed the initiative for the establishment of this musical series of events, as well as the strength to carry it through in the past 10 years, in a very decisive way to the Rehfeldt Family. Firstly, it was their son – my fellow student at that time – who gave the inspiration for this event. His father – my organ teacher during my studies – strongly supported the realization of it by mediating contacts and cooperating directly in the series. How meaningful this special gift of providence now seemed to me, that precisely the Rehfeldt Family was able to pick up and continue the jubilee series. It was a wonderful concert with the maximum number of attendees possible during the pandemic.

In his opening remarks, Father Wolfgang Metz was able to approach the situation in a very empathetic way. In one of his poems, “It’s No Art,” he made it clear that it’s no art to believe, to hope, and to love when things are going well for us. The true art is to do so when it’s hard. In a subtle way, he made reference to handling the current crisis situation of the pandemic.

In October, amid new hygiene regulations due to the acute spread of the coronavirus, the religious evening music could be performed by Mr. and Mrs. Karl and Claudia Echle as well as by Auxiliary Bishop Johannes Kreidler – a true gift!

How striking the “Salve Regina” sounded, sung by Claudia Echle and accompanied by her husband on the organ. “To thee do we cry, poor, banished children of Eve; to thee do we send up our sighs, mourning and weeping in this valley of tears.”

The auxiliary bishop gave his opening remarks a hopeful tone: “I would like to sing of the consolation of music!”

Music as Consolation and Source of Strength – Precisely in Difficult Times

With gratitude for these events that mediated consolation and a new perspective, we remain hopeful that the final event can also take place:

On Saturday, November 14, at 6:00pm, with tenor Andreas Grossberger, organist Peter Schleicher, and Jan Benjamin Homolka on the French horn. Spiritual remarks will be given by SWR radio chaplain Father Thomas Steiger of Tuebingen.