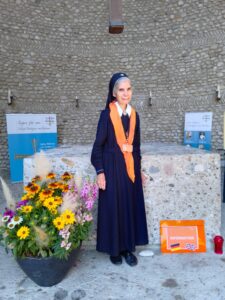 I have been a consultant at the concentration camp memorial for several years. I mostly lead school classes. Sometimes I can walk through the memorial with Schoenstatt groups in the footsteps of Father Kentenich. Because of the pandemic, the memorial was completely closed for several weeks. Then only the outside area was accessible. We speakers used home offices for research, preparatory work and training.

Since Whitsun there has been a special offer for visitors: “Cicerone”. * Speakers are on duty at nine outdoor locations on the weekend – recognizable by the orange scarf and an information board. They provide information about their location. Visitors can ask. There is illustrative material for the museum, which is now restricted in access. The project is very well received, as the echoes show.

We speakers make the experience:

–  One has more time to respond to people.

– Visitors are more likely to ask questions than in a large group.

– They expressly thank you more often.

– People are always thoughtful and looking for answers.

– Some know little about the time of National Socialism. So you have to explain something about the former concentration camp in general. Often there are questions about the crematorium and the gas chamber.

– Hardly anyone knows that from the end of 1940 almost all clergymen from other prisons across Europe were interned centrally in Dachau. So they learn that church representatives were also in the resistance.

I signed up for the info point “religious memorials” with the location “Agony of Christ chapel”. The colleagues said the place “suited” me. In addition, I am protected there against rain, storm, and sun! I draw the visitors’ attention to all religious places of remembrance. I report on the good ecumenical cooperation. Some even just read the text panels on the buildings or listen to their audio guide.

There are very different visitors: workers – often from Eastern Europe -, highly educated people, academics, families with small children or with school children, young couples, individual visitors … It is valuable if you can speak more languages.

The ringing of the big bell shortly before 3 p.m. is impressive for many visitors. They often ask why the bell is ringing at 3 p.m. What “Carmel” or “Holy Blood” means, what the symbol above the entrance represents (crown of thorns, barbed wire). 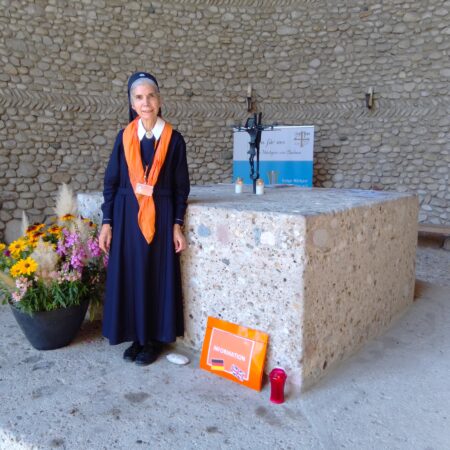 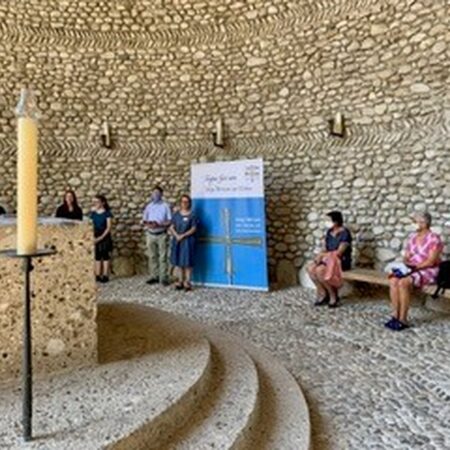 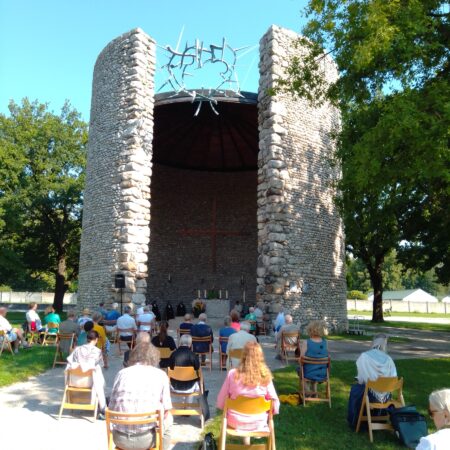 Some make a sign of the cross when entering the Agony of Christ chapel. The other day someone brought a “faith candle” so that I could light it occasionally!

Many are impressed by the monumental building, by the large stones, but also by the Nagelfluh concrete in the altar area. A colleague knew that this is called “Herrgotts-Beton”  (God’s concrete)in Upper Bavaria because it was often used in churches.

I can often give interested visitors information about clergymen as prisoners, including about Father Kentenich. That’s why I always have the pages about him from the memory book “Names instead of Numbers” with me.

My Cicerone weekend assignment on August 8th and 9th

I was just on Lagerstrasse (Camp Street) when a young woman came up to me in a hurry and wanted to ask some questions. It was a student from the Schoenstatt Movement in Ecuador who is currently studying in southern Germany. “Where are special places with Fr. Kentenich”, she wanted to know. I looked at what information I still had in my pocket and gave it to her. Then I offered her that she could come to my place of work at the Agony of Christ Chapel later. We were both happy about this spontaneous meeting. Later three students actually came to the chapel. So I was able to give everyone some more material.

During the Cicerone mission there were again many intensive discussions on political, social, philosophical and religious topics, also with people from other countries. The language makes things difficult.

A middle-aged Frenchman who could still speak a little German from school asked: Where was God? He said that again and again. I tried to convey some things to him, spoke of the freedom that God has given man. But he apparently didn’t understand that. However, he wasn’t totally disapproving.

There was a family from the former GDR whose parents had to visit Buchenwald during their school days. The man confessed that they were unilaterally informed at the time.

On Sunday morning I was able to take part in the memorial Mass for the 60 Years of the Agony of Christ Chapel. The Carmelites also took part. So there was a considerable crowd, because of Corona we kept our distances. The main celebrant was cathedral dean Dr. Lorenz Wolf. Musically, the celebration was embellished by a string ensemble from Munich.

In the afternoon at around 3 p.m. the novena to Karl Leisner was prayed in the Agony of Christ Chapel. August 12th is the 75th anniversary of his death. The association “Blessed of Dachau Concentration Camp” has agreed to do this. The chairwoman, Ms. Neudert, brought two new rollups and flyers. It was a small, ecumenical prayer group. 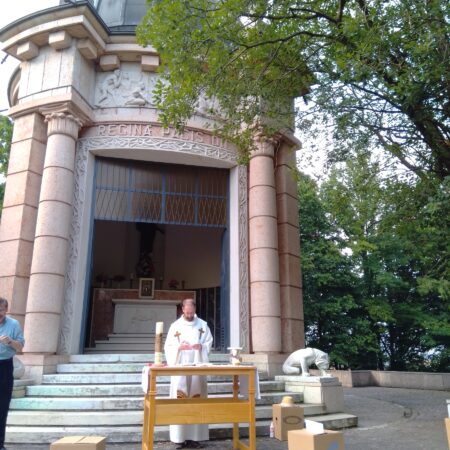 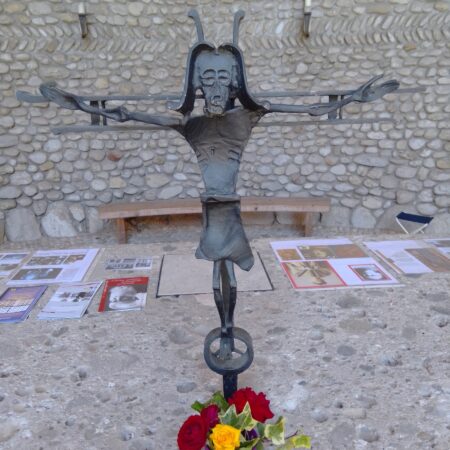 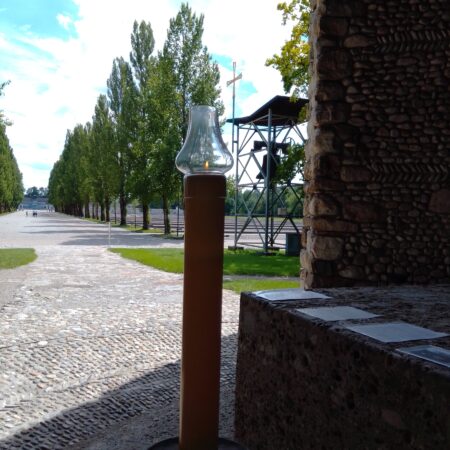 My location, the “Agony of Christ chapel” is central.

It’s a good chance to reach people from all over the world today without being intrusive! “Schoenstatt encounters” are a particular joy.
Recently a young Schoenstatter came from Paraguay. He proudly showed me his large MTA medal.
Around July 16, two league members made a “Dachau pilgrimage” on behalf of their community and remembered the Coronation of the Mother of God – bronze sculpture in the memorial room – and their gift at the time: the scepter!
On the day the Brothers of Mary and the Family Institute were founded, I met Mr. B. from the association on the roll call square. Such loyalty impresses me!
I am grateful that our sisters’ international seminar was able to attend the attic. In small groups I was able to lead the young sisters outdoors. The weather was also favorable on these days.

For now, the Cicerone offer is available until the beginning of September. Perhaps because of the good feedback it will also be offered in some places next year.

Digital offers are increasingly being implemented. So I was able to help colleagues in the background with the live tour of the religious memorials. At the Dachau Forum /KEB, I take part in the digital test program, specifically in the digital seminar with the topic: “Church, religion, belief in National Socialism”. I hope that I can later use the material for the Schoenstatt Movement, MPHC.

At the end of September my themed tour “Survival strategies of prisoners in the Dachau concentration camp” is planned on behalf of the Munich Educational Institute. Because of the lockdown, it could not take place in May.

* Cicerone is a name for a tourist guide who leads tourists and visitors to museums, sights etc. and explains the historical background.