“To be even more one heart and one soul…”,

this wish of Father Kentenich stands above the celebration of the renewal of the coronation, at which around 100 members of the secular institutes of the Ladies of Schoenstatt and the Schoenstatt Sisters of Mary as well as the Schoenstatt Women’s Federation took part on August 8, 2020 Adoration Church on Mount Schoenstatt.

In preparation, representatives of the three communities gathered in the early afternoon for silent prayer at the coronation site, where the crown, decorated with flowers, was ready.

All the women who arrive at the Adoration Church in the late afternoon of this hot summer day can feel that they are welcome – and the Corona regulations in particular help ensure that everyone is personally greeted by name. The communities prepared the celebration together with love and joy, which the participants experience through many details: be it through the content-rich presentation to get in the mood, the musical contributions, the festively celebrated Holy Mass or the royal floral decorations. 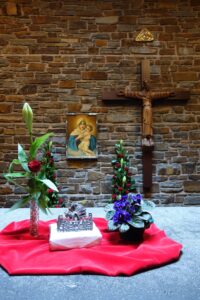 The texts and photos of the presentation invited one to look back 51 years: It was 1969, a year after Father Kentenich passed away. Like the entire Movement, the women’s communities now also had to find their way, in a permanent bond with the founder, to carry on the mission for women in modern society.

The Ladies of Schoenstatt and the Sisters of Mary wanted to entrust this search to the Blessed Mother together. As an expression of this, they gave her a crown and gave her responsibility. This coronation happened deliberately at the place where Father Kentenich was called into eternity. Five years later, the Women’s Federation officially joined the coronation. The symbolism of the crown expresses the lasting originality of the communities and the unity in the common mission.

The leaders of the three women’s communities have been meeting regularly for several years for an exchange and renew the crowning glory. The basic concerns of the first coronation have remained and are supplemented by current concerns and challenges.

Golden jubilee delayed – and yet at the right time

For the golden anniversary year 2019, the coronation renewal was planned on a larger scale. Many members of the three communities should witness it. The fact that no common date could be found was the external reason for postponing it to 2020, the year in which 100 years of the Women’s Movement will be celebrated in Schoenstatt – 100 years in which women have made a significant contribution to shaping Schoenstatt. This is precisely what gives the coronation an additional, very special accent.

The introduction to the coronation is followed by the celebration of the Eucharist, which takes up the aspects of the coronation in texts and songs. The concelebrating priests also give a sign of togetherness between the communities: The General Director of the Sisters of Mary, Dr. Bernd Biberger, heads the service. The priestly assistant of the women’s association, Father Antonio Bracht, Father Juan Pablo Catoggio, Chairman of the General Presidium, and Dr. Christian Löhr, member of the General Presidium. Father José Melo, the Spiritual Director of the Women of Schoenstatt, cannot be there because of a trip abroad. 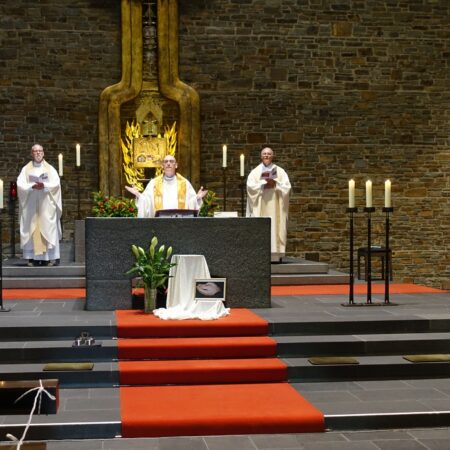 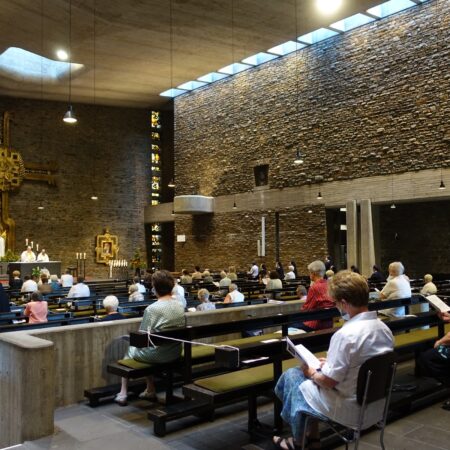 In his sermon, Dr. Biberger addresses two aspects of the renewal of the coronation:

On December 8th, 2020 it will be 100 years since the first women, Gertraud von Bullion and Marie Christmann, made the covenant of love with the Thrice Admirable Mother, Queen and Victor.

This anniversary is in a social and ecclesiastical context in which the question of a modern image of women and of the position of women is hotly and controversially discussed. So if on this day the coronation of Our Lady is renewed, then the three communities declare themselves ready to make their contribution to the renewal of women in the secular reality.

Throughout the entire celebration, signs and gestures repeatedly show that the coronation renewal is a joint effort by the three women’s communities and that each one contributes in its own way.

To prepare the gifts, the precious crown is carried to the front of the altar, where it is placed in its place for all to see. 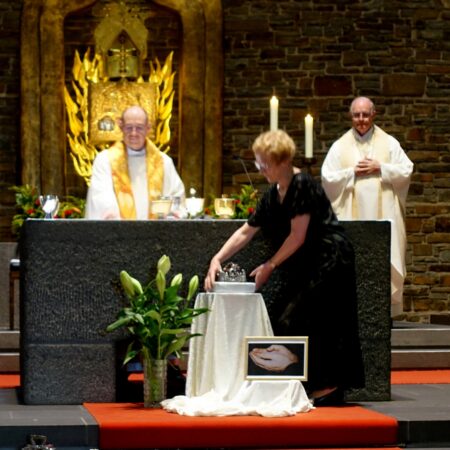 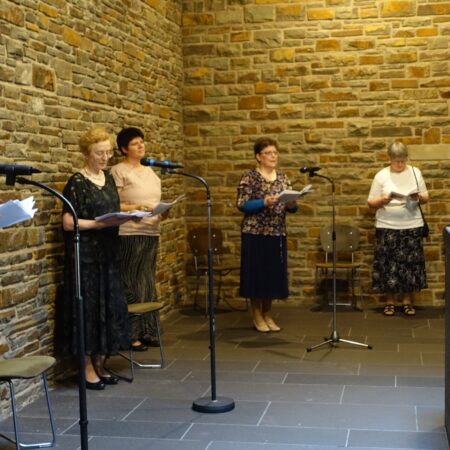 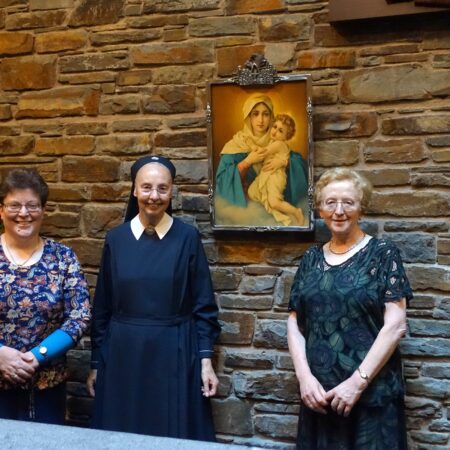 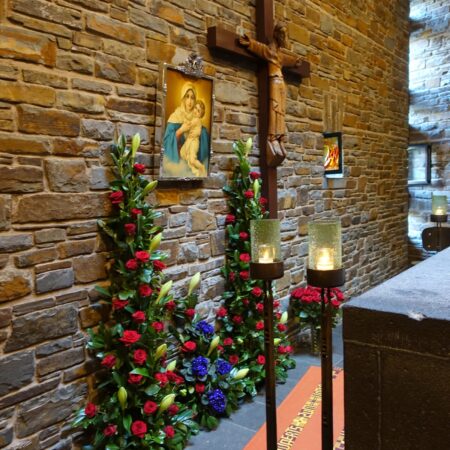 The members of the community leaderships, who are at the climax of the celebration in the founders’ chapel, experience it particularly moving. The renewal of the coronation is also visibly carried out together: The Superior General of the Women of Schoenstatt, Dr. Gertrud Pollak and the Federation director, Marianne Mertke, stand to the right and left of the MTA picture and touch the silver frame, while Sister M. Aleja, the Superior General of the Sisters of Mary, attaches the crown again. This event makes the standing together in the covenant of love clear.

The festival continues – meet each other in the garden

After the coronation ceremony, everyone is invited to the garden of the Novitiate House of the Sisters of Mary, where a tastefully prepared buffet and cold drinks invite you to refresh yourself. Three sisters delight those present throughout the evening with pieces of music performed with accordion, flute and guitar. 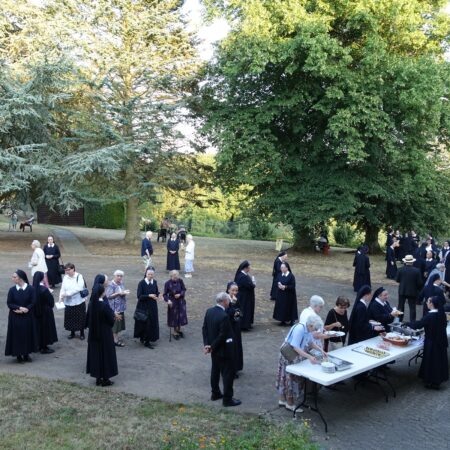 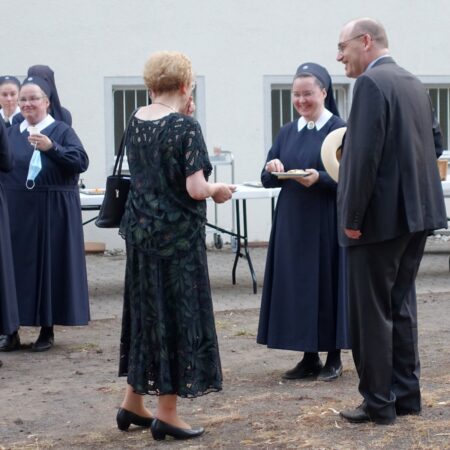 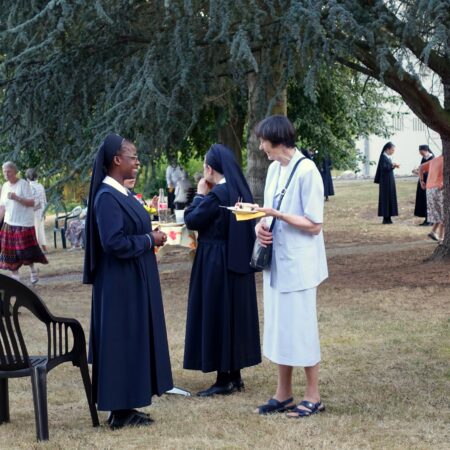 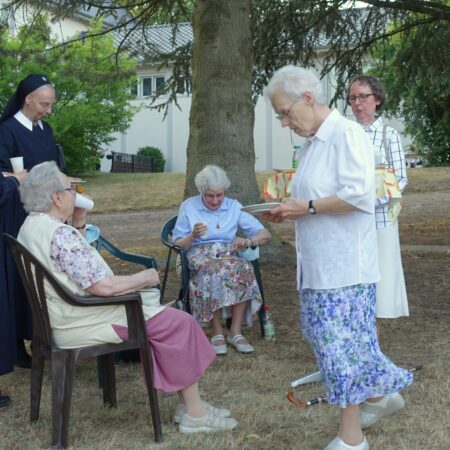 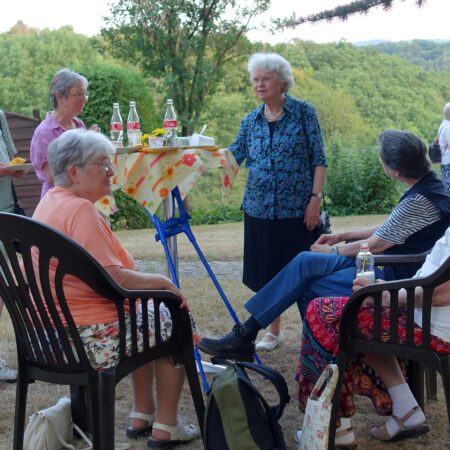 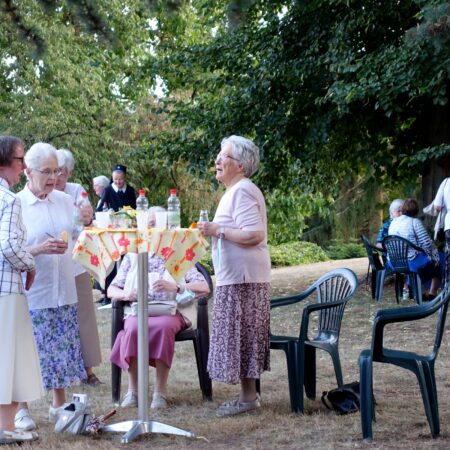 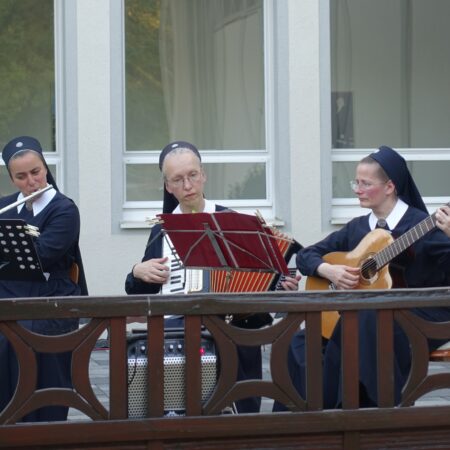 It is a pleasure to see how the communities come together for a joyful exchange in small groups: several women are soon deep in conversation about the ways of their calling to Schoenstatt. A member of the Women’s Federation from the Czech Republic and a Sister of Mary from Burundi celebrate a surprising reunion after 18 years: at that time they attended a German course together. Many grateful echoes express that it is simply wonderful to celebrate this festival together.

Everyone experiences a happy family spirit in the awareness: Our newly crowned Queen is the actual hostess who prepared this festival, during which both the depth of the common spirituality and the natural togetherness could be experienced.