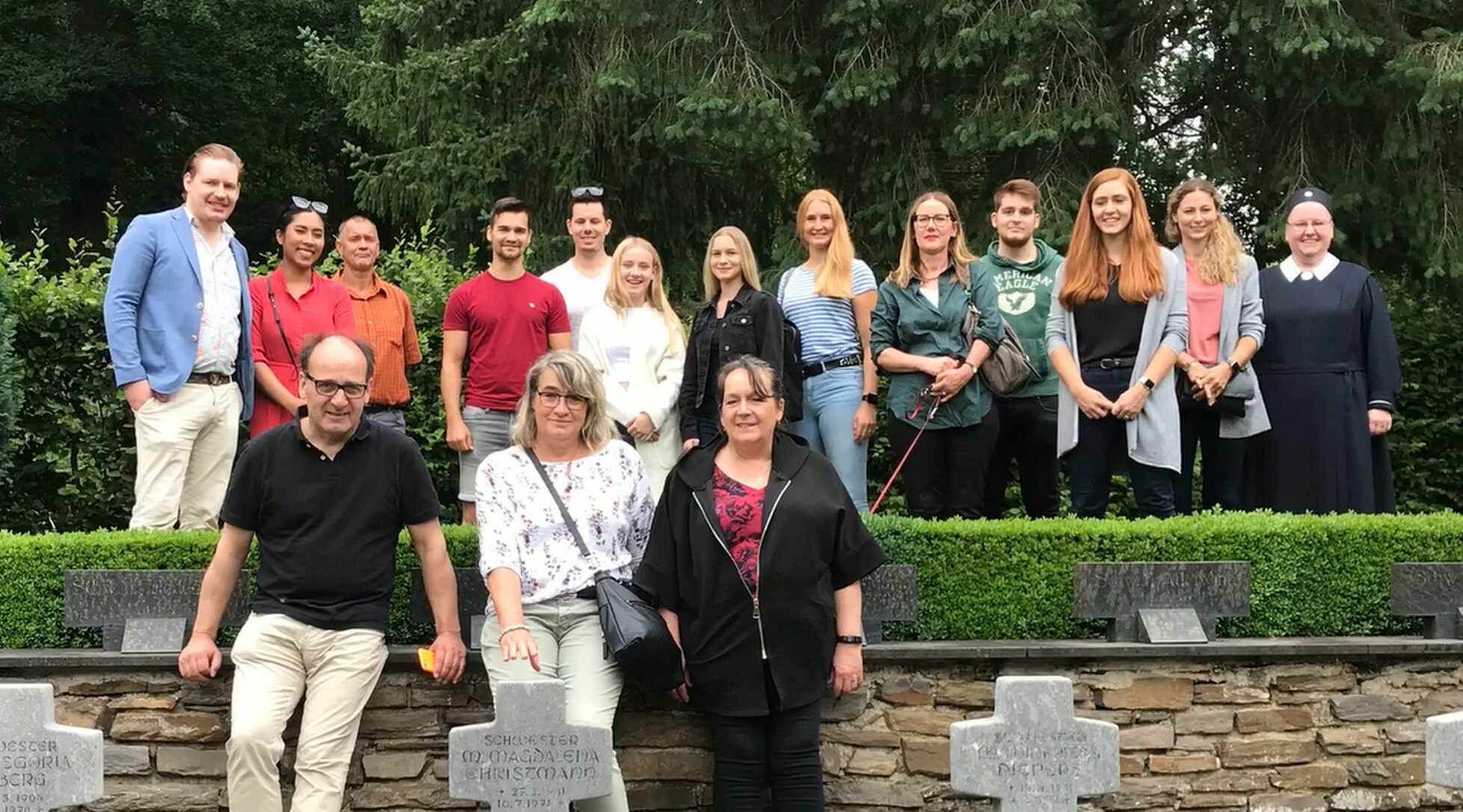 In the Anniversary Year of the Women’s Movement

The work in the pilgrim center in Schoenstatt is always marked by surprises.

The visit of the Gerlach family and their relatives in recent weeks was a special experience. This family is related to Marie Christmann, the late sister M. Magdalena, and her cousin Gertraud von Bullion.

The Gerlach family had deliberately planned the day at the Schoenstatt pilgrimage site. The family was not aware that these two women started the women’s movement in Schoenstatt 100 years ago. So the visit surprisingly turned into an anniversary meeting.

Here is a little historical insight: As a voluntary Red Cross sister in World War I, Gertraud von Bullion learns about Schoenstatt spirituality through the Pallottine student Franz-Xavier Salzhuber and his group of theologians and then contacts the founder Fr. Josef Kentenich by mail.

The welcome round with the Gerlach family took place on Mount Schoenstatt on the church square of the Adoration Church. The family members joined them one by one. There was a warm welcome for everyone, in bright sunshine.

Ms. Gerlach explained the family relationships to me: “My grandpa Julius was Marie Magdalena’s brother. It was also he who proposed marriage to Gertraud. My father Wolfgang, one of Julius’ children, moved to Leverkusen for professional reasons. Marie Magdalena is my great-aunt and great-great-aunt of our children. Originally it was planned for this day that the family members from southern Germany would also come. But that was not possible due to the Corona crisis. ”

In the Church of Adoration, I gave a family tour. Certainly her great- or great-great-aunt Sister M. Magdalena was often in this church for prayer and for Holy Mass. It was there that the Requiem was celebrated for her.

After visiting the grave of Father Kentenich we drove to the sisters’ cemetery and went to the grave of Sister M. Magdalena. There I was able to tell small testimonies about the life of the deceased and also read the text of the memorial card.

The relatives hadn’t expected to hear so much about their great aunt and were touched by it.
Together we prayed at the grave and thanked Sister M. Magdalena for the life.

After lunch in Pilgerheim, the Gerlach family wanted to get to know the origin of Schoenstatt. We met near the Original Shrine and I told them about that time. I was able to bring in small encounters that Marie Christmann and Gertraud von Bullion had at the first women’s conference.

Gertraud von Bullion urged the founder, Father Kentenich, to hold a women’s conference in Schoenstatt. His superiors were of the opinion that the “Old House” was not a meeting place for women due to its simplicity. Gertraud was of the opinion that they would rather sleep on straw mats than not be able to come.

This women’s conference came about in August 1921. Gertraud put in a helping hand to clean up the house a little. The wooden stools in front of the beds were brought together for the talks. You could see Gertraud sitting in front of the door peeling potatoes. She picked up participants at the train station with a handcart to make it easier for them to transport their suitcases.

It gave me the gift of holding the lead from this point of view. I was able to show the family how their relatives lived and worked here and I was delighted with the positive reactions.

A small house for a large woman

The end of the Schoenstatt stay was a visit to the Gertraud von Bullion House.

The many old family pictures and the photos from the women’s meeting in Schoenstatt were particularly interesting for the Gerlach family. However not only that, but also the life of Gertraud von Bullion impressed the relatives, which she put into the word: “Serviam – serve”.

All in all, it was a real family reunion in Schoenstatt. The Gerlach family drove home with great gratitude. A few days later Ms. Gerlach wrote: “We are still thinking about this beautiful day in Schoenstatt. We were very impressed by your loving, warm nature and the talent to tell exactly what was important to us. Our children were very enthusiastic, and that made my sister and me very happy, because the Catholic faith is very important to us and in this time it is difficult to pass it on.”