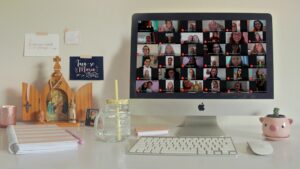 In light of the 100th anniversary of the “Women in Schoenstatt”, the Schoenstatt Women’s Youth in Brazil is celebrating its 80th anniversary. Inspired by the words of the father and founder, Father Joseph Kentenich, they chose the motto of this year: “You are my promise!”

Various initiatives were planned with the aim of strengthening the national ideal “Lily for the father, Tabor for the world”. We have now been surprised by the pandemic caused by the corona virus. Some of the plans have been changed. However, even with social distance, the national unity was strengthened. Each of the young people tried to be the new woman for today’s world, as our father and founder had dreamed of us.
Various actions and events took place through digital platforms:

UNUM IN SANGUINE (united in blood)

“With the hand on the pulse of the time and the ear at the heart of God” (Fr. Joseph Kentenich), the women’s youth of Brazil experienced a Holy Week, different from other Holy Weeks. For the first time, they did national retreats online, each in her home and spiritually united.

Barbara Melo reports: “Good Friday was a deep experience. The celebration of the Lord’s Passion, accompanied by a retreat online, with the participation of the young people from the four regions of the Schoenstatt Movement in our country was a unique Holy Week, a historic Holy Good Friday as Schoenstatt Women’s Youth in Brazil. ”

The theme of the retreat was inspired on the original Unity Cross; it showed the unity of the Blessed Mother and Jesus, present upon the cross. The Brazilian youth expressed their unity at the foot of the cross during the Holy Week.

United with the International Schoenstatt Family in the CORONAmater current, the afternoon of April 15 was not dark like on the other days of the quarantine: Mary shone as the light of hope. After the coronation, the Schoenstatt Women’s Youth offered a “lily cantata”

With the participation of more than a hundred young people from all over Brazil, they renewed the coronation of the “Queen of Promise” on a pilgrim shrine, which accompanies the Schoenstatt Youth and expresses the acceptance of the promise made to the father and founder in the phrase of the current motto. In this anniversary year, the “Queen of Promises” makes a pilgrimage through all of Brazil’s locations where the structure of the Schoenstatt Women’s Youth is present.

Open to the voices of the time, the young people became aware of the need to reformulate the official channel of the Schoenstatt Women’s Youth in Brazil – www.jufem.com.br. After intensive work, the national website was recaptured. The show of the new woman in modern times received another “training tool”. It was presented on May 1 to the Lily Queen as an anniversary gift with “training material”, with “content”, which will help the participants in the discussions regarding the mutual “connection”, and at the same time it is a contribution to the news of all locations of the “Brazilian Tabors”. In addition to the three pillars that structure the “website”, the new pillars “Church”, “Schoenstatt” and “Tabor for the World”, they help to strengthen the youth even more.

Let there be Mary today!

Heloisa Benato reports: “In this month of May, with the desire to recapture the image of the new woman reflected in Mary, we started the challenge” Let there be Mary today “. During the month we sought to conquer eight virtues of the Blessed Mother. We gave her our hearts as the most beautiful May flowers in her garden.”