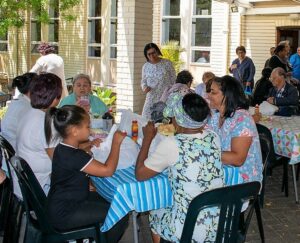 Each year during the month of February,

a Day for the Sick, Aged and Physically Challenged

is held at Schoenstatt, Constantia.

Originally it was a purely Schoenstatt event which began in the “seventies” but over the years it has spread into the whole Archdiocese.  It is organised by the Schoenstatt Sisters and actively supported by members of the Schoenstatt family.

Approximately 130 people came this year on the 16th February, the Sunday following the world day of prayer for the sick. A lady who celebrated her 90th birthday expressed the wish to spend it at Schoenstatt. She got a lovely surprise when her nephew travelled from quite a distance, especially to bring her for the day.

The program commenced with refreshments and a special Welcome to all. Once everyone had settled down, Sr. M. Glynis Kirchhoffer gave her talk. 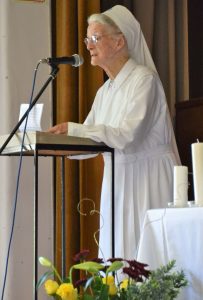 She began with a story and then explained that whatever happens in our lives is for our best. It is difficult to say: “It is good, very good” when situations arise that are almost unbearable. However, in hindsight, we often realise that a particular suffering or event is for our best and is a source of blessing and fruitfulness for others.  This also applies to the lives of Jesus, Our Lady, St. Joseph and Fr. Joseph Kentenich, the founder of Schoenstatt. Did St. Joseph find it easy to say: “It is good, very good” to flee in the middle of the night with the Child and His Mother to Egypt to escape the hand of a murderer? No, but the end result was good: the Child, our Saviour, was saved!  Fr. Kentenich’s freely-chosen “Yes” to life in solitary confinement and concentration camp proved to be a source of life-giving grace and blessing for his followers.

In old age and illness, we tend to feel helpless. We don’t feel “it is good, very good!” because we cannot do what we did before, or respond as we used to, but that doesn’t mean our lives are less fruitful. On the contrary, it is when we feel our limitations, lack of control and utter dependence on others, that our lives bear the most fruit. Our Lord taught, preached, worked miracles and was acclaimed by the people. However, at the end of his life as he hung helplessly on the Cross, He could DO nothing but simply BE who He was: the perfect Child of the Father to whom He surrendered Himself in total obedience. That was the moment of Redemption! For Mary, too, her standing at the Cross was the most important ‘moment’ of her life. Our lives, too, are marked with the Cross, the one Cross of Christ which, with Our Lady’s help, we are privileged to carry for the salvation of the world in which we live.

These and other truths of our faith are largely unknown, especially to our young people. In a talk Pope Francis gave in January 2020 in Rome, he highlighted the important role of grandparents in relation to the young. He spoke of the elderly as the “indispensable link in educating children and young people in the faith”.  So often parents do not have time to talk about such issues of faith to their children as they are involved in keeping the home together, whereas grandparents, through their example and words, can share their wisdom, experience of life and their faith with their grandchildren.

Generally speaking, children and young people are open to such values. Through our lives, we should lead others by word, example and our very being and cooperate with the grace offered us. With and like Mary, we try to make these graces available to all whom we meet in whatever situation we find ourselves. Whatever situation it is, “it is good, very good” because it has been permitted by God. 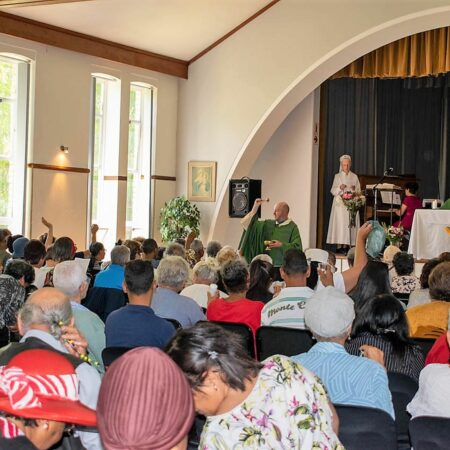 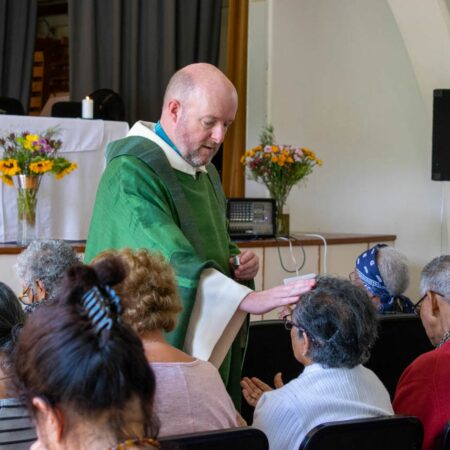 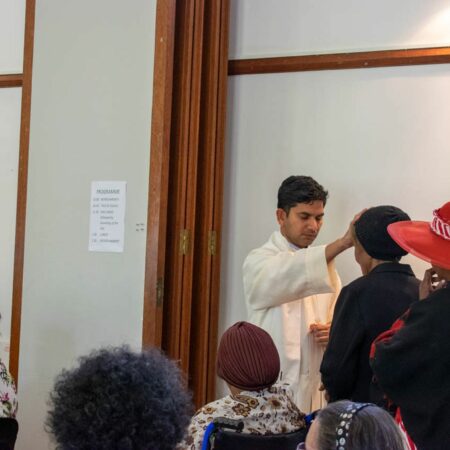 Fr. Hugh O’ Connor, who celebrated the Mass, spoke about healing in his homily, especially  healing from within. Together with Frs. Manuel and Jackson, both Pallotine Fathers, everyone who wanted to be anointed, had the opportunity to receive the sacrament. The priests went personally through the rows to each person, so that they did not need to stand in a long queue.

Lunch was then served. The Catering firm, Feedem, had organised the food in parcels, and a volunteer team of Schoenstatt members and Sisters handed them out. The weather played along to ensure that it was a beautiful day. The inside dining room was full, while others enjoyed sitting out on the lawns or on the patio. There had been strong winds during the program in the hall, but God and Our Lady cared that by lunch time it had subsided. 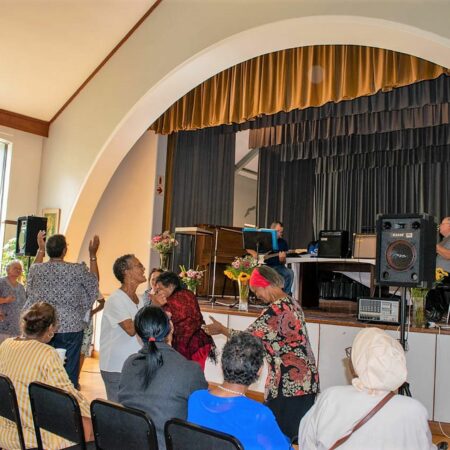 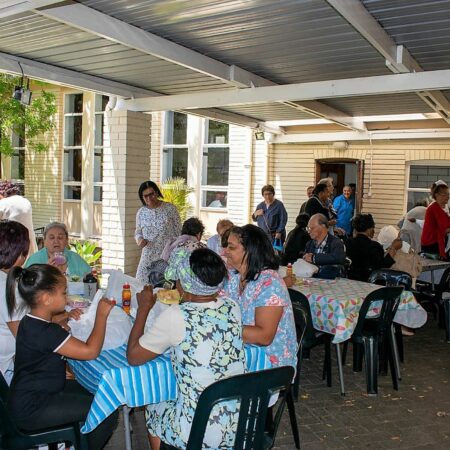 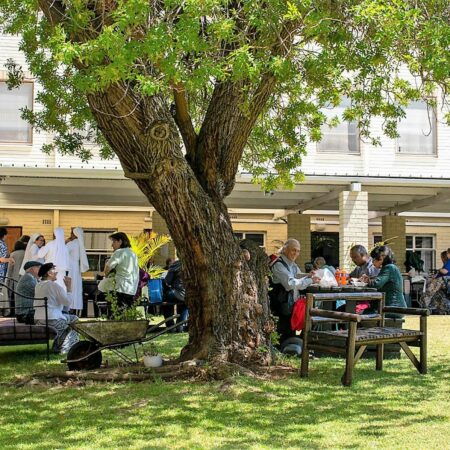 The day ended with entertainment. Once again, Divine Providence took charge to ensure that it was a wonderful experience. According to the load-shedding schedule, there was supposed to be no electricity which would have been most unfortunate for the two-man band. However, the load-shedding was cancelled and they could entertain everyone with their favourite golden oldies. At first, the people remained in their seats, but then some could not resist and at the end there was quite a lively group in front of the stage singing and dancing along. This included a 95-year old lady and even one with a crutch. At the rate she was going, one wouldn’t have thought she needed the crutch.

It was a most enjoyable day and all appear to be looking forward to the event next year.