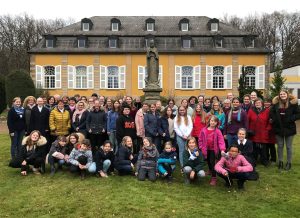 Inspired by the current of the “living crown”, the MJF from Cologne discovered the statue of the Immaculate Conception with a crown of stars in the park of Maria Rast. It became a symbol for them of their striving to be pure, faithful and noble like Mary. The astonishment was great when it was discovered that 40 years ago the Girls’ Youth had given the crown of stars to the Blessed Mother. At that time it was a common coronation on the part of the Girls’ Youth, the pilgrim’s branch, the mothers and the sisters.

So the idea was born to celebrate this anniversary together – with the MJF 2019 and the Girls’ Youth 1979. Detectives dug up names and searched for addresses. The effort was worth it.

A meeting across the generations

More than 30 women from the generation of that time accepted the invitation to the coronation jubilee, among them three Sisters of Mary who belonged to the Cologne Girls’ Youth as young people, and also Sr. M. Julie Fischer, who until 1983 had built up many children’s and youth groups in the communities around Maria Rast. For the MJF’s Advent weekend, 39 girls had come, so that it was a cross-generational meeting, with over 70 participants from 9 to 80 years of age. 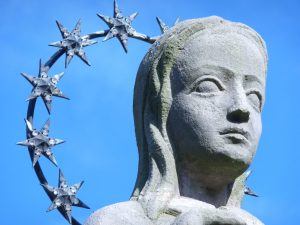 Looking with love at Mary

The MJF had planned this meeting with much effort and love. For the spiritual preparation a nine-week novena had been written, which was also sent by mail to the alumni. Each week the symbols associated with the statue of the Immaculate Conception drew attention to Mary as the Holy Scriptures in the book of Revelation draw her, for example: “The moon under her feet” (Rev 12:1). In the interpretation it said: “The moon under her feet means that the night is no longer dark or threatening, but that we are safe in Mary”. Every week there was an impulse as to how to be Mary today: “Do I have under my feet what is perishable or impermanent? Can I control myself if I am tempted by things that are neither useful nor helpful?” With a similar novena, the young people had also prepared themselves for the coronation celebration 40 years ago.

The “alumni” arrived in the early afternoon. Already at the entrance there was a happy “hello” and again and again the question: “Who are you again?”

One participant described her first impression: “…when I looked around the room and saw many unknown faces, it was a joy to think: everyone here likes the Blessed Mother in the Shrine! The great and the small Apostles of Mary.

Annette Hillgruber, the diocesan leader of the Schoenstatt MJF Cologne, welcomed young and old and showed very clearly how the idea of the “living crown” has ignited in the Cologne MJF. With some pictures from the chronicle and a report by Sr. M. Gertrud Foemer, the memory of the 1979 event was then awakened.

Sr. Andra-Maria Lingscheid, who in 1979 was a district leader in Maria Rast, succeeded in connecting the current that is alive today with what moved the youth 40 years ago. With regard to the statue of the Immaculate Conception, she said that in Maria Rast the Blessed Mother had come out of the Shrine, as it were, and she was looking for people who like her would make the world a little brighter. That the work of the Girls’ Youth continues is shown in the many ways in which the girls of that time are working for their families and communities today.

Highlight at the Immaculate Statue and Holy Mass

To prepare for the highlight of the afternoon, everyone was invited to formulate a personal coronation title for the Blessed Mother. After a brief statio in the Shrine, the participants went to the Immaculate Statue in the park with burning lights in their hands. Bearers with torches stood beside the statue, which was decorated with a lily chain of lights. The youth presented the Blessed Mother with a lily and entrusted her with a small crown from a youth who had participated in the coronation at that time and who is now in eternity. It was a profound moment when each one handed the crown to the Blessed Mother in her heart. “My most beautiful moment was the silent time at the statue of the Immaculate Conception, when we all stood around the Immaculate Conception with lights in the dark. It was the opportunity to tell the Blessed Mother the personal crowning title,” as one of the youth expressed this experience for her. 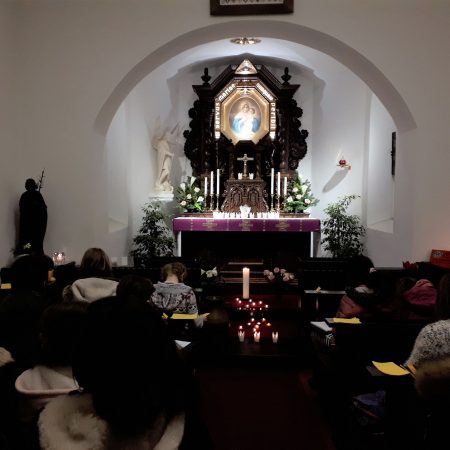 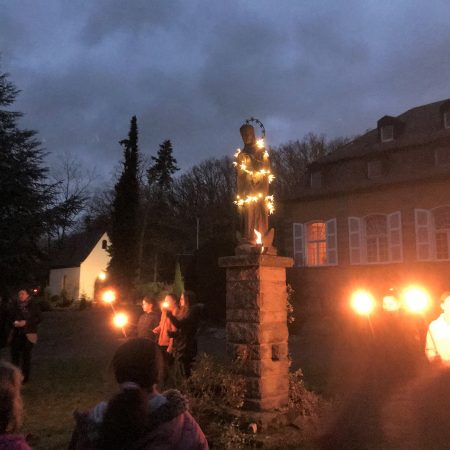 The afternoon concluded with the celebration of Holy Mass. In his homily, Father Platz continued the experience of the children and youth. A celebration in honor of a queen was particularly well prepared and was followed with interest by many people. Our Queen is the Mother of God and we belong to her court. Thus before the final blessing he invited the “small” and “large” Apostles of Mary to come to an audience before the picture of Mary and pray the small consecration there. 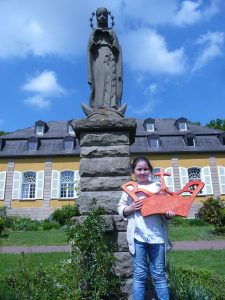 In an echo it says: “When everyone stood before the picture of the Blessed Mother in the house chapel, it was a beautiful sight. I imagined how the Blessed Mother really looks at each one with great love and great joy, and how she knows about the deepest longing of each one in her heart – and that she seeks and will find ways to fulfill it if we go along – as best we can.”

From this experience the alumni drove back home. As they said goodbye, one could hear the wish again and again: “But we won’t wait for the next anniversary until we meet again.” The young people were fortunate because they could relive their experiences at their next meeting.