Even before I formed you in the womb,
I’ve chosen you,
even before you came out of the womb,
I have sanctified you:” (Jer 1.5) 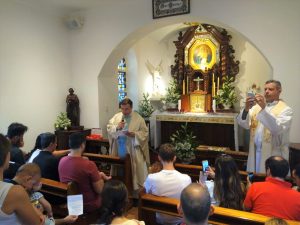 There is an old and beautiful custom of bringing children to the church to consecrate them to our Lord and the Blessed Mother. It is a custom that is unfortunately lost. Its roots, however, can already be found in the Holy Scriptures. When we present our children to the Lord, we remember what Joseph and Mary did with the Child Jesus.

In 2019 this custom was given new life in the

People who come to New Schoenstatt were offered the opportunity to consecrate their children to the Blessed Mother.

Usually they are young parents who are interested and who have the desire to place their children under the protection and accompaniment of Mary. 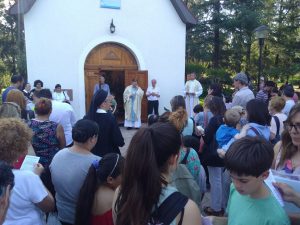 They are invited to a meeting in which a couple and a Sister teach them the meaning and importance of this custom.

– The contributions to the Capital of Grace will be shown as a concrete way for parents to find the help of the Blessed Mother in the education of their children. The parents are invited to express these contributions to the Capital of Grace in a symbolic way so that they can remember them in their daily lives. They give this symbol to the Blessed Mother in the consecration ceremony.

– It explains what it means to consecrate their children to the MTA: the task that Mary    takes on in education and their own responsibility that they have in education. These reflections create a religious climate and become a profound experience.

December 8th, the Feast of the Immaculate Conception of Mary, 25 children were consecrated to the Blessed Mother, and their parents pledged to bless them every day and to encourage them in their love for Mary. 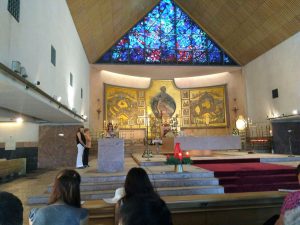 Three steps helped to make this event a special moment of grace:

– The Eucharist, during which the consecration took place. The families took the first benches in the Church of God the Father and during the offertory they brought to the altar the medals that the children would later receive.

– The consecration prayer. They receive it already during the preparation and can become familiar with the text that they will pray in the Shrine on the feast day of the consecration.

– The presentation of the medal to the child.

In the consecration prayer, the parents ask the Blessed Mother to take care of their children, to keep them good and pure, and to teach them to walk in the ways of God. The parents also entrust themselves to the protection of the Queen of Schoenstatt and ask her to help them fulfill their mission as parents and educators. They express their longing to be instruments of God’s love. 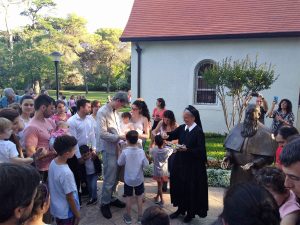 After the parents prayed the consecration prayer, the medals were blessed and the parents brought forward their contributions to the Capital of Grace which they had brought to the Shrine during this time of preparation. In front of the Shrine, at the statue of Father Kentenich, the parents received the blessed medals and placed them on their children. It was a moment of great movement and joy, but above all it was a profound encounter with the Blessed Mother.

At the end, the parents were invited to participate in a “school for parents”. This is a second step with which we want to support the parents in their religious as well as in their pedagogical task.

We are convinced that all these initiatives are doors so that young families can find a home and a place of education in the Shrine.