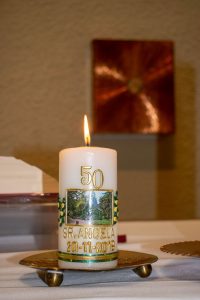 Golden Jubilees are special occasions as they mark the fiftieth year of a specific occasion or event. In the Old Testament, if a Jubilee was announced, a trumpet was blown so that the whole congregation of Jerusalem could hear it. Today, we don’t blow trumpets to announce a Jubilee but rather come together as a community to celebrate and give thanks to God. This is what the Schoenstatt Sisters and the friends of Sr. M. M. Angela McKenzie did on the 20th November 2019. Fifty years ago, Sr. M. M. Angela was incorporated into the community as a member of the Schoenstatt Sisters of Mary. She had already celebrated this ‘milestone’ together with her course sisters in Germany earlier in the year. However, it was also important to celebrate it in the local community.

During the month of November, Fr. Bernd Biberger, the Director General of the Schoenstatt Sisters’ Community, visited the Sisters’ province in South Africa. The date to celebrate Sister M. Angela’s Jubilee was therefore set to coincide with his visit. What was especially significant was that the Archbishop of Cape Town, Stephen Brislin, and his Auxiliary, Bishop Sylvester David, could join us for the festive Holy Mass.  Four other priests, including Fr Peter-John Pearson, the Chaplain to the Schoenstatt Movement in Cape Town, were also present for the celebrations. The House Chapel of the Provincial House in Constantia, was filled to capacity with Sisters, family and friends of Sr. M. M. Angela, including a family of three generations whom Sr. M. Angela served in her role as a pre-primary school teacher. 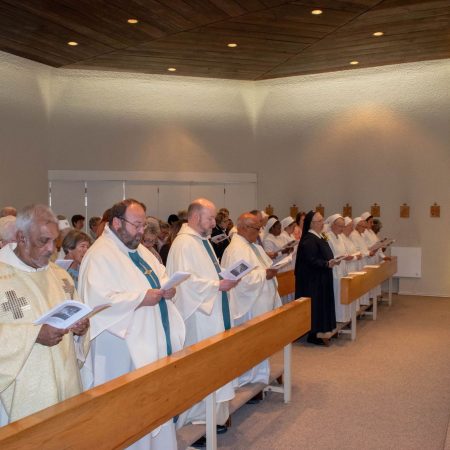 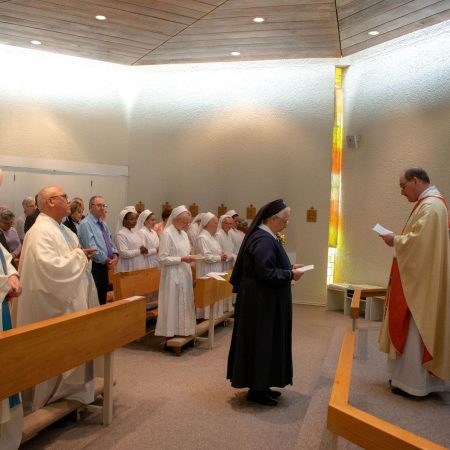 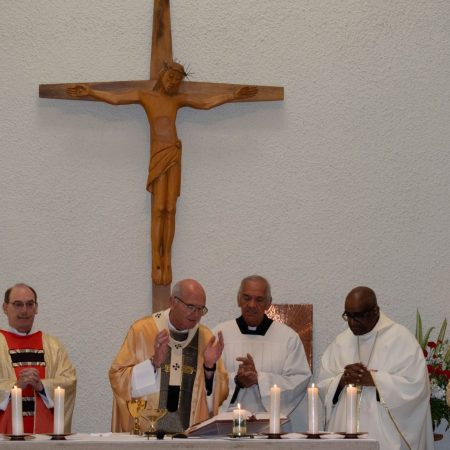 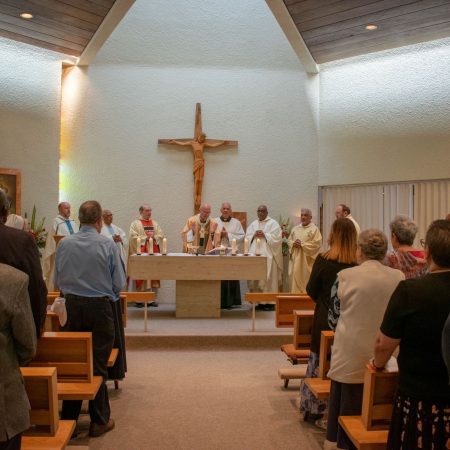 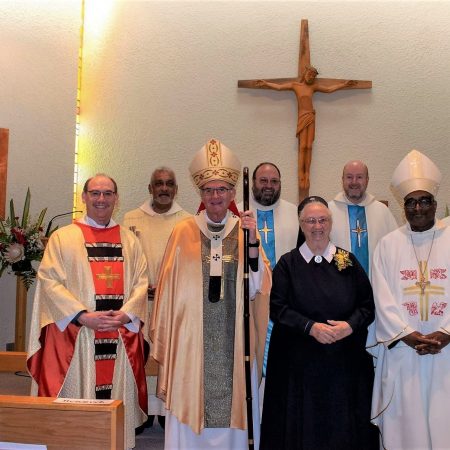 Fr. Bernd Biberger delivered an inspiring sermon highlighting the victory of God in the life of Sister M. Angela and in the lives of us all. Despite the fact that “in our secularised society God does not feature in people’s lives and is being marginalised”, He is nevertheless victorious in our modern world. Fr. Biberger explained that one of the aims in Schoenstatt is to educate the “new person in the new society”: a person who is God-centred. According to Father Kentenich, the founder of Schoenstatt, the model for this “new person” is Mary Immaculate. To quote Fr. Biberger: “According to Father Kentenich, the Immaculata is the person in whom God has triumphed. In the words of our founder ‘the Father has uniquely triumphed over the Blessed Mother. God conquered her mind, her will and her heart. Above all, He triumphed over her human nature.’ God drew his Blessed Mother to himself; she was open at all times to receive his immeasurably merciful love.”

Father Biberger assured us that God can also be victorious over us if we open ourselves to receive His merciful love. This can only happen when we are aware of and acknowledge our limitations and weaknesses. He said: “Our founder, Fr Kentenich proclaimed: ‘Our way to holiness consists in recognising and acknowledging our weakness and smallness.’ We have been taught by our founder that we are miserable but royal children, worthy of God’s mercy.”

Father Biberger reminded us that Pope Francis proclaimed the year 2016 as the extraordinary Holy Year of Mercy and how clear he made it that the world needs the Father’s mercy. The Church in her smalless is called to acknowledge her limitations and faults and draw down the Father’s Mercy.

He concluded his sermon with the words: “When the Father is victorious over us then we become fully the person we are meant to be. Together with her (Sr. M. M. Angela) we give thanks for all the graces she has received over the past fifty years in our Sisters’ Family and for the miracles God has worked in her life. At the same time, we thank her for all she has given to our Family and to all whom she has served over the years. We ask for the blessing of the Triune God for the coming years, so that the heavenly Father can be victorious again and again in her life. Amen.”

After Holy Mass the celebration continued. Photographs were taken and everyone enjoyed a wonderful buffet lunch prepared by the caterers at Schoenstatt. Stories and anecdotes were then shared with Sister M. Angela and her many friends. She had spent many fruitful years working at and managing the well-known pre-primary school at Villa Maria. Some of her past learners, their parents and even grandparents, happily gathered around her to exchange experiences. They were very grateful for the early education that their children received in her care. 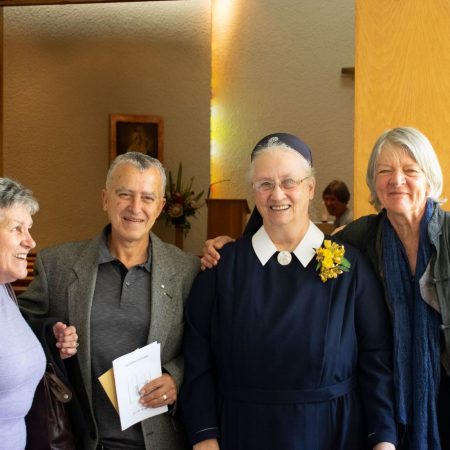 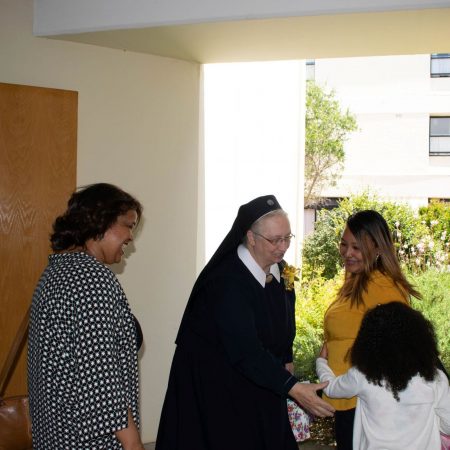 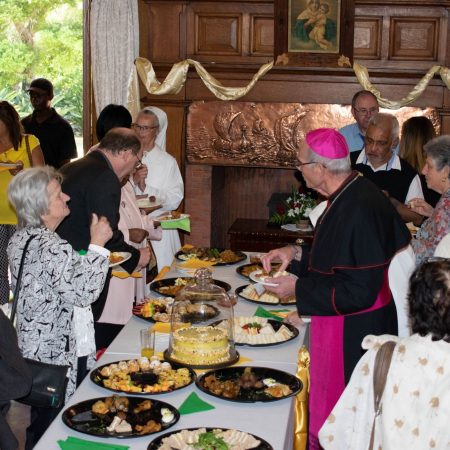 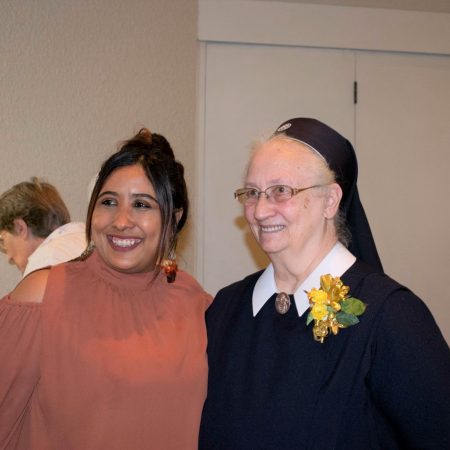 After Sister M. Angela’s “retirement” from the school, she took up ministry in the local national Hospital, Groote Schuur. It is there that she selflessly serves the needs of the patients, bringing them Holy Communion, offering them a listening ear, practical help and the promise of prayerful support. May her ministry to the sick and lonely members of our society continue for many years to come!