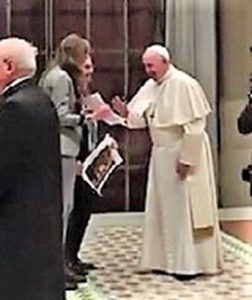 The Crib Scene of the Adoration Church

the highest number of “Likes”. Vatican News had called at the beginning of Advent to send in favorite crib photos and rate them with “Likes”.

The most highly rated nativity scene out of over 100 crib pictures received was shown to Pope Francis on Christmas Day and he blessed it and all who are connected with this nativity scene.

A special gift for all visitors who come to the “10 minutes at the Crib” this year.

They are all included in this blessing this year.

Ines Schaberger of Vatican News, who was very happy to show the Holy Father the picture with our crib scene, reports in an interview:

“Pope Francis smiled and rejoiced when he saw the photos of the crib scene. He already knew the winners of the Crib Challenge, the Schoenstatt Movement, from Latin America. My colleague Mario Galgano asked him to bless with the crib scene also the 10,000 visitors who come each year to the Advent devotions of the Schoenstatt Sisters of Mary. Pope Francis placed his hand on the photo of the Schoenstatt crib scene, paused for a moment, and then made a sign of the cross. “Beautiful,” he said. When I explained to him that we received more than 100 crib scenes from Austria, Germany and Switzerland, he also blessed them”. 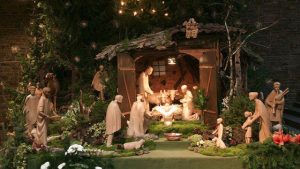 Information about the manger in the Adoration Church

The first nativity scene in the Adoration Church was made of dark clay and arranged on sisal. It later came to the provincial house in Quarten/Switzerland.

In search of a larger nativity scene, the Adoration Sisters discovered the first copy of our present nativity scene at the Krippana exhibition in Monschau. A sculptor from Wiedenbrück made it for a parish. Since the husband had already died, his wife re-carved the figures according to a model of his. So we can say that our crib was designed and created by an artist couple. Hartmann/ Rochelle is the name.

For the first time in 1979 this crib with the baby Jesus, Mary and Joseph and a few shepherds and sheep stood on a green cloth, left of the altar.

For Christmas 1981 the Adoration Sister M. Lucida Mächler and the caretaker, Mr. Wolfsberger, planned and built the stable and the landscape. Little by little the different elements were added: The brook and the well, henhouse, log, animals and plants.

The figures were also completed: the Three Wise Men and the camel with its driver were added. For the Holy Year 2000, the stable was given a gate which was ceremonially opened during the Christmas Mass.