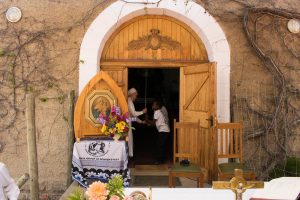 In 1948, during the visit of Father Kentenich, the founder of Schoenstatt, he told the people of Cathcart that the Sisters had a secret. This secret was that they promised to build a Schoenstatt Shrine. However, Father Kentenich explained to the people that this was only possible with the help of the local community. They had to urge our Lady to come and take up her abode in the Shrine.  The people took this seriously and helped in several ways.

Since the area was very rocky, dynamite had to be used to make place in the rock. The women and children of the surrounding areas would then help the Sisters to crush the rocks.  These were then used as stones for the foundations. They also helped financially towards the building fund as well as spiritually. The Sisters encouraged the people to pray and make sacrifices for the successful building of the Shrine. One little boy once brought a very crumpled and sticky sweet to the Sister as his little sacrifice and solemnly told her “I only licked it once!” All these contributions great and small helped so that the Cathcart Shrine could be blessed on the 18th December 1949.

This year we could celebrate the 70th Jubilee of the Cathcart Shrine, the first Schoenstatt Shrine on African soil.

It was a day of grace and blessing.

Since the anniversary date is too close to Christmas, the 70th jubilee was celebrated on 16th of November, which is also the birthday of Father Kentenich. The main celebrant of the Mass was Dr Bernd Biberger, the Director General of the Schoenstatt Sisters. He was on a three-week visit to the Sisters of the South African Province. Joining him in celebrating the Mass was Fr. Ludwe Jayiye, a member of the Schoenstatt Diocesan Priests’ Union. Notably his vocation developed in the shadow of the Cathcart Shrine. He is currently serving in the diocese of Port Elizabeth.  Fr. Innocent, a Pallottine Father who celebrates Holy Mass on a biweekly basis for the Cathcart parish, also attended the Jubilee. 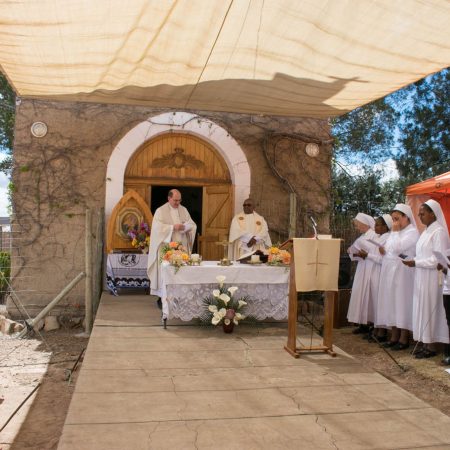 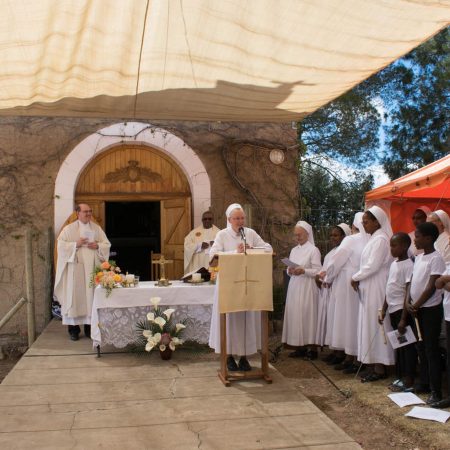 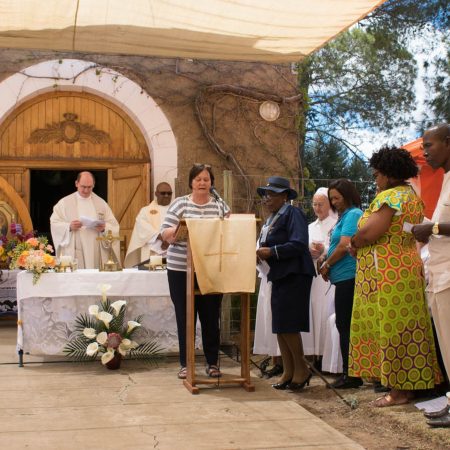 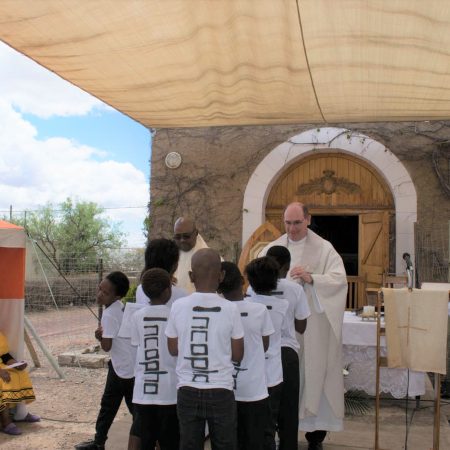 Thanks for 85 years of missionary work

The Jubilee Mass was a special moment in the history of Cathcart and was an occasion to give thanks for 85 years of missionary work of the Schoenstatt Sisters in the Eastern Cape. The first sisters arrived from Germany in Cathcart in 1934. They worked in Queenstown, Cathcart, MacKay’s Nek and Grahamstown, often serving the poorest of the poor.

When they had been sent out to South Africa, the community was just eight years old and the sisters young and inexperienced. On arrival, they were ill-equipped to deal with the circumstances they encountered. However, with great faith, love and loyalty to the mission given them by the founder of Schoenstatt, they bravely started. With little means – their first home was rented and filled with borrowed tables, chairs, and beds since they had nothing and very little money, they achieved great things and helped countless people.

Pilgrims came from far and near

in honor of the Mother Thrice Admirable, Queen and Victress of Schoenstatt and the many blessings that have flowed from this place of grace and pilgrimage in the Eastern Cape. They came from East London, Stutterheim, King Williams Town, Port Elizabeth, Queenstown and as far as Cape Town to be part of the celebrations. Members of the choir from the Xhosa speaking community in Kati came to enhance the singing.

In addition, children who attend the weekly ‘After schools’ program’, joyfully learnt the Mass parts in English – Xhosa being their mother tongue. Furthermore children from the Inchopo music project learnt a music piece for the communion reflection. During the celebration, pilgrims from various parts of South Africa presented the readings and petitions. It was truly a beautiful and diverse celebration. 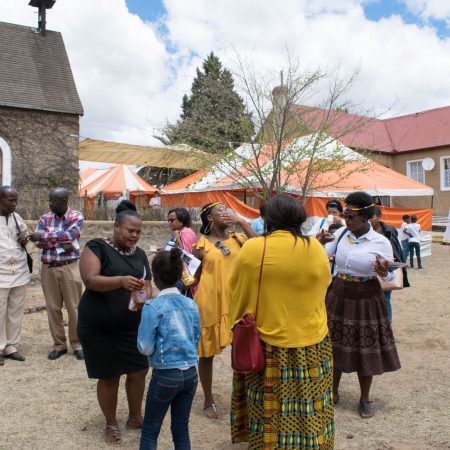 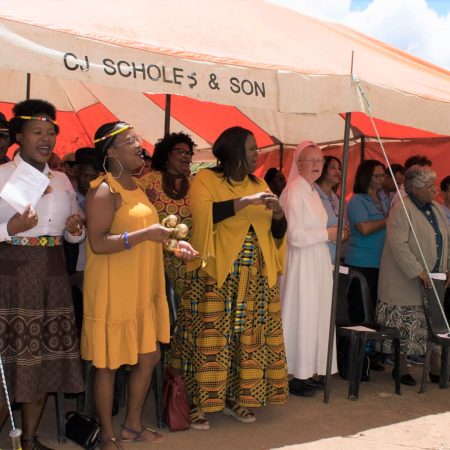 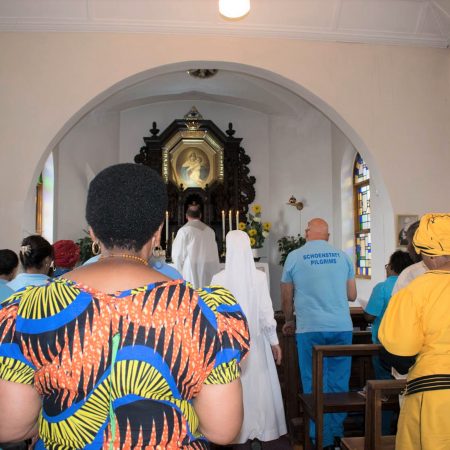 During his sermon, Fr Biberger emphasized some of the many blessings that have gone out from the Shrine in Cathcart. Being the first Schoenstatt Shrine on African soil, it is affectionally known as the Mother Shrine of Africa. As such this place of grace is connected specifically with the eight other Schoenstatt Shrines in Africa. Notably it is also the first Shrine built out of the many English-speaking countries where Schoenstatt has taken root. Attending the celebrations were sisters from South Africa, Scotland, Ireland and Kenya. Their vocations can be linked back to the Cathcart Shrine.

After Holy Mass, tea and cake were served and the guests had an opportunity to chat and share their experiences of the Cathcart Shrine.

A room of prayer and encounter with the founder 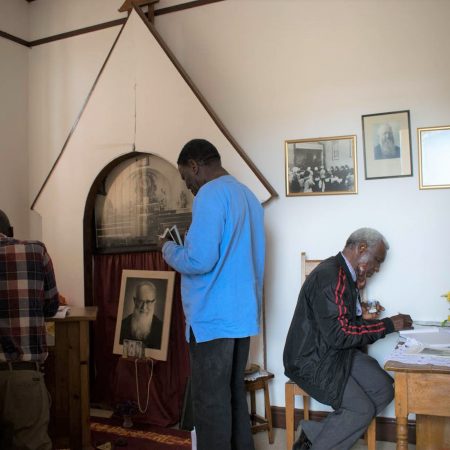 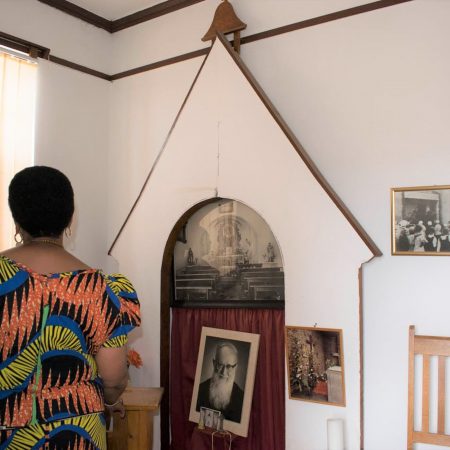 Many used the occasion to visit the “Father Room.” This is the room where Father Kentenich stayed in while visiting Cathcart. Many of the items he used are on display. It has become a room of prayer and encounter with the founder of Schoenstatt.

The day ended fittingly with benediction in the Shrine and a blessing for all pilgrims for a safe journey home.